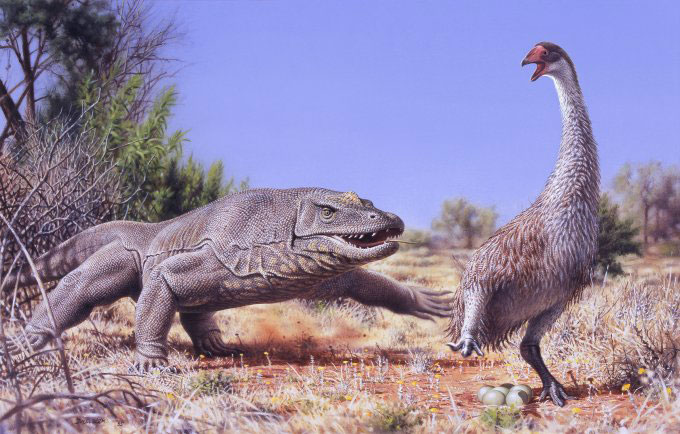 The first direct evidence that humans played a substantial role in the extinction of the huge, wondrous beasts inhabiting Australia some 50,000 years ago — in this case a 500-pound bird — has been discovered by a University of Colorado Boulder-led team.

The flightless bird, known as Genyornis newtoni, was nearly 7 feet tall and appears to have lived in much of Australia prior to the establishment of humans on the continent 50,000 years ago, said CU-Boulder Professor Gifford Miller. The evidence consists of diagnostic burn patterns on Genyornis eggshell fragments that indicate humans were collecting and cooking its eggs, thereby reducing the birds’ reproductive success.

“We consider this the first and only secure evidence that humans were directly preying on now-extinct Australian megafauna,” said Miller, associate director of CU-Boulder’s Institute of Arctic and Alpine Research. “We have documented these characteristically burned Genyornis eggshells at more than 200 sites across the continent.”

A paper on the subject appeared online Jan. 29, in Nature Communications.

In analyzing unburned Genyornis eggshells from more than 2,000 localities across Australia, primarily from sand dunes where the ancient birds nested, several dating methods helped researchers determine that none were younger than about 45,000 years old. Burned eggshell fragments from more than 200 of those sites, some only partially blackened, suggest pieces were exposed to a wide range of temperatures, said Miller, a professor in CU-Boulder’s Department of Geological Sciences.

Optically stimulated luminescence dating, a method used to determine when quartz grains enclosing the eggshells were last exposed to sunlight, limits the time range of burned Genyornis eggshell to between 54,000 and 44,000 years ago. Radiocarbon dating indicated the burnt eggshell was no younger than about 47,000 years old.

The blackened fragments were likely burned in transient, human fires — presumably to cook the eggs — rather than in wildfires, he said.

Amino acids — the building blocks of proteins — decompose in a predictable fashion inside eggshells over time. In eggshell fragments burned at one end but not the other, there is a tell-tale “gradient” from total amino acid decomposition to minimal amino acid decomposition, he said. Such a gradient could only be produced by a localized heat source, likely an ember, and not from the sustained high heat produced regularly by wildfires on the continent both in the distant past and today.

Miller also said the researchers found many of the burnt Genyornis eggshell fragments in tight clusters less than 10 feet in diameter, with no other eggshell fragments nearby. Some individual fragments from the same clusters had heat gradient differences of nearly 1,000 degrees Fahrenheit, conditions virtually impossible to reproduce with natural wildfires there, he said.

“We can’t come up with a scenario that a wildfire could produce those tremendous gradients in heat,” Miller said. “We instead argue that the conditions are consistent with early humans harvesting Genyornis eggs, cooking them over fires, and then randomly discarding the eggshell fragments in and around their cooking fires.”

Another line of evidence for early human predation on Genyornis eggs is the presence of ancient, burned eggshells of emus — flightless birds weighing only about 100 pounds and which still exist in Australia today — in the sand dunes. Emu eggshells exhibiting burn patterns similar to Genyornis eggshells first appear on the landscape about 50,000 years ago, signaling they most likely were scorched after humans arrived in Australia, and are found fairly consistently to modern times, Miller said.

The Genyornis eggs are thought to have been roughly the size of a cantaloupe and weighed about 3.5 pounds, Miller said.

Genyornis roamed the Australian outback with an astonishing menagerie of other now-extinct megafauna that included a 1,000-pound kangaroo, a 2-ton wombat, a 25-foot-long-lizard, a 300-pound marsupial lion and a Volkswagen-sized tortoise. More than 85 percent of Australia’s mammals, birds and reptiles weighing over 100 pounds went extinct shortly after the arrival of the first humans.

The demise of the ancient megafauna in Australia (and on other continents, including North America) has been hotly debated for more than a century, swaying between human predation, climate change and a combination of both, said Miller. While some still hold fast to the climate change scenario — specifically the continental drying in Australia from about 60,000 to 40,000 years ago — neither the rate nor magnitude of that change was as severe as earlier climate shifts in Australia during the Pleistocene epoch, which lacked the punch required to knock off the megafauna, said Miller.

Miller and others suspect Australia’s first inhabitants traveled to the northern coast of the continent on rafts launched from Indonesian islands several hundred miles away. “We will never know the exact time window humans arrived on the continent,” he said. “But there is reliable evidence they were widely dispersed across the continent before 47,000 years ago.”

“In the Americas, early human predation on the giant animals in clear — stone spear heads are found embedded in mammoth bones, for example,” said Miller. “The lack of clear evidence regarding human predation on the Australia megafauna had, until now, been used to suggest no human-megafauna interactions occurred, despite evidence that most of the giant animals still roamed Australia when humans colonized the continent.”