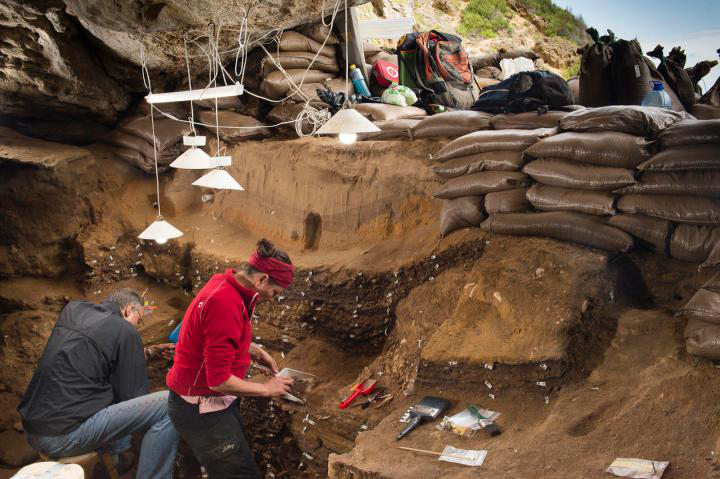 Blombos Cave in South Africa has given us vast knowledge about our early ancestors. In 2015, four open access articles, with research finds from Blombos as a starting point, have been published in the journal PLOS ONE.

“We are looking mainly at the part of South Africa where Blombos Cave is situated. We sought to find out how groups moved across the landscape and how they interacted,” says Christopher S. Henshilwood, Professor at the University of Bergen (UiB) and University of the Witwatersrand and one of the authors of the articles.

The technology of our ancestors

Since its discovery in the early 1990s, Blombos Cave, about 300 kilometres east of Cape Town, South Africa, has yielded important new information on the behavioural evolution of the human species. The cave site was first excavated in 1991 and field work has been conducted there on a regular basis since 1997 — and is on-going. Blombos contains Middle Stone Age deposits currently dated at between 100,000 and 70,000 years, and a Later Stone Age sequence dated at between 2,000 and 300 years.

The researchers from UiB and Witswatersrand have now been looking closer at technology used by different groups in this and other regions in South Africa, such as spear points made of stone, as well as decorated ostrich eggshells, to determine whether there was an overlap and contact across groups of Middle Stone Age humans. How did they make contact with each other? How would contact across groups affect one group? How did the exchange of symbolic material culture affect the group or groups?

“The pattern we are seeing is that when demographics change, people interact more. For example, we have found similar patterns engraved on ostrich eggshells in different sites. This shows that people were probably sharing symbolic material culture, at certain times but not at others” says Dr Karen van Niekerk, a UiB researcher and co-author.

This sharing of symbolic material culture and technology also tells us more about Homo sapiens‘ journey from Africa, to Arabia and Europe. Contact between cultures has been vital to the survival and development of our common ancestors Homo sapiens. The more contact the groups had, the stronger their technology and culture became.

“Contact across groups, and population dynamics, makes it possible to adopt and adapt new technologies and culture and is what describes Homo sapiens. What we are seeing is the same pattern that shaped the people in Europe who created cave art many years later,” Henshilwood says.

NOTES
1. The University of Bergen