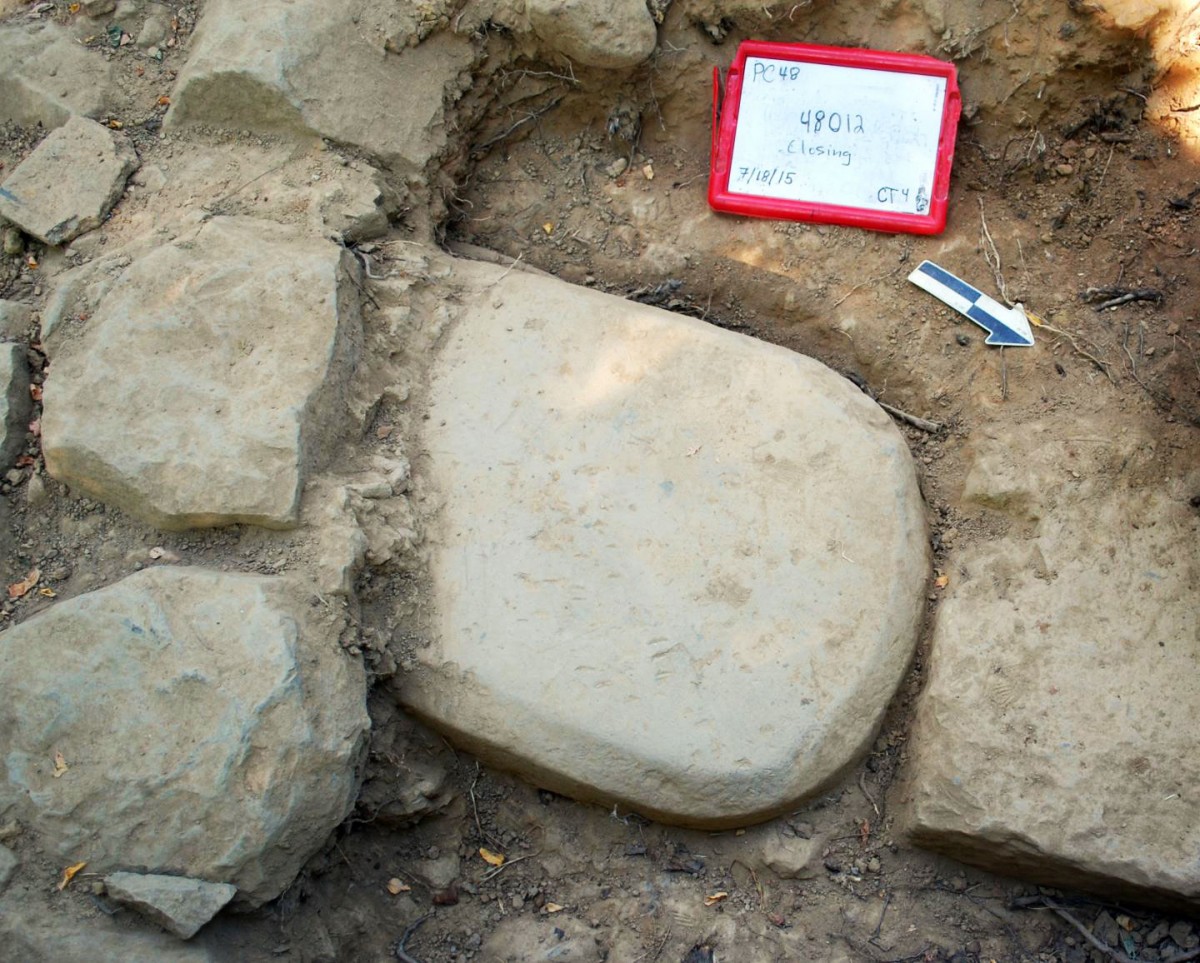 Archaeologists in Italy have discovered what may be a rare sacred text in the Etruscan language that is likely to yield rich details about Etruscan worship of a god or goddess.

The lengthy text is inscribed on a large 6th century BCE sandstone stele that was uncovered in an Etruscan temple. The new religious artifact is rare. Most Etruscan discoveries typically have been grave and funeral objects.

“This is probably going to be a sacred text, and will be remarkable for telling us about the early belief system of a lost culture that is fundamental to western traditions,” said archaeologist Gregory Warden, co-director and principal investigator of the Mugello Valley Archaeological Project, which made the discovery.

Scholars in the field predict the stele will yield a wealth of new knowledge about the lost culture of the Etruscans.

The stele was discovered embedded in the foundations of a monumental temple where it had been buried for more than 2,500 years.

The Mugello Valley dig, specifically the Poggio Colla site, is northeast of Florence, Italy. The stele would have been connected to the early sacred life of the sanctuary there. The architecture then was characterized by timber-framed oval structures pre-dating a large temple with an imposing stone podium and large stone column bases of the Tuscan Doric type, five of which have been found at the site, Warden said.

“We hope to make inroads into the Etruscan language,” said Warden, president and professor of archaeology at Franklin University Switzerland. “Long inscriptions are rare, especially one this long, so there will be new words that we have never seen before, since it is not a funerary text.”

Conservation and study of the stele, with full photogrammetry and laser scanning to document all aspects of the conservation process and all details of the inscribed surfaces, is underway in the next few months at the conservation laboratories of the Tuscan Archaeological Superintendency in Florence by experts from the architecture department of the University of Florence. The sandstone, likely from a local source, is heavily abraded and chipped, with one side reddened, possibly from undergoing burning in antiquity. Cleaning will allow scholars to read the inscription.

“We know how Etruscan grammar works, what’s a verb, what’s an object, some of the words,” Warden said. “But we hope this will reveal the name of the god or goddess that is worshiped at this site.” The text will be studied and published by a noted expert on the Etruscan language, Rex Wallace, Professor of Classics at the University of Massachusetts Amherst.

“Inscriptions of more than a few words, on permanent materials, are rare for the Etruscans, who tended to use perishable media like linen cloth books or wax tablets,” Turfa said. “This stone stele is evidence of a permanent religious cult with monumental dedications, at least as early as the Late Archaic Period, from about 525 to 480 BCE. Its re-use in the foundations of a slightly later sanctuary structure points to deep changes in the town and its social structure.”

“Apart from the famous seaside shrine at Pyrgi, with its inscribed gold plaques, very few Etruscan sanctuaries can be so conclusively identified,” Turfa said. “A study of the names of the dedicants will yield rich data on a powerful society where the nobility, commoners and even freed slaves could offer public vows and gifts.”

Etruscans were a highly cultured people, but very little of their writing has been preserved, mostly just short funerary inscriptions with names and titles, said archaeologist Ingrid Edlund-Berry, professor emerita, The University of Texas at Austin.

“So any text, especially a longer one, is an exciting addition to our knowledge,” said Edlund-Berry, an expert in Etruscan civilization. “It is very interesting that the stele was found within the walls of the buildings at the site, thus suggesting that it was re-used, and that it represents an early phase at the site.”

The Poggio Colla site is in northern Etruria. Most inscriptions have come from centers further south, Edlund-Berry said.