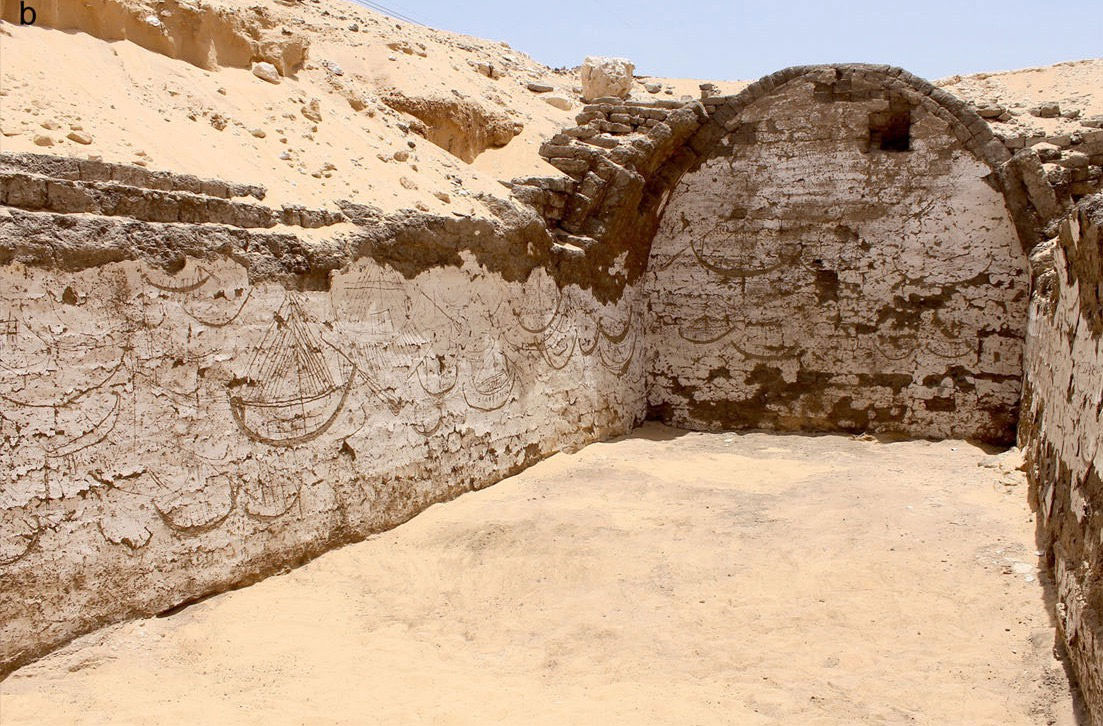 In Abydos, dating to the 12th Dynasty

Boat burial was found within richly decorated chamber in Abydos, Egypt. Archaeologists led by Josef Wegner (Penn Museum, the University of Pennsylvania) found the remains of a boat within a chamber richly decorated with a tableau depicting ships, incised on its interior walls.

According to what is announced by Wegner in his latest article, the chamber where the boat remains were found is described as a specially prepared, subterranean vaulted building. It was found in close proximity to the symbolic mortuary complex of 12th Dynasty Pharaoh Senwosret III (c. 1850 BC), its axis intentionally aligned with the enclosure’s front wall. Having previously located by early 20th c. archaeologists Arthur Weigall, the building, made of mudbrick was only explored now (from 2014 up to today) due to its fragile condition. Still, it remains as one of the best examples of Pharaonic mudbrick architecture located so far.  Its entrance was sealed with a 1 m-thick mortared brick blocking and its floor seems to form a cavity -hosting the ship’s remains. Still, its most impressive feature remains its wall decoration: an informally arranged tableau extending over a total length of 25 m on the side walls and end wall.

On the tableau, around 120 individual boats are depicted, incised on white plaster. They range significantly in size and complexity and are arranged not in a way of a unified scene but rather clustered together in the inner walls of the building. Their execution displays they were made in a short timeframe by different people working freehand. According to the excavator, this kind of decoration can demonstrate the intention of a group of people to commemorate or establish a kind of personal connections with a boat or boats. What is not yet certain is whether the vessels were drawn just before the chamber was sealed, or by later visitors who, somehow gained access at a time long after the place had been blocked. An extensive deposit of late 12th Dynasty intact pottery jars found  running against the outer face of the building’s brick blocking, are indicative  of the contemporaneity between the building, the boat burial within it, and the mortuary enclosure of Senwosret III where it belongs.

But what about the vessel itself? It survives poorly, in the form of elements of planking, probably of cedar. The recovered elements are not in primary context; they are elevated in the sand and do not sit directly on the bottom of the cavity formed in the building’s floor . These elements appear to derive from a nearly 20 m-long boat that was buried intact but later dismantled for reuse of the wood.  As stated in the article, future examination of all of the fragments may indicate whether these elements can be attributed to boat construction and, if so, whether the vessel might have predominantly employed cedar, or used multiple wood species for different elements of the construction. What is also left to be examined is how the boat was transferred to the site of the building. Continued work in the hull cavity and detailed documentation of recovered wood elements is planned for 2016–2017 , in order to answer further questions.