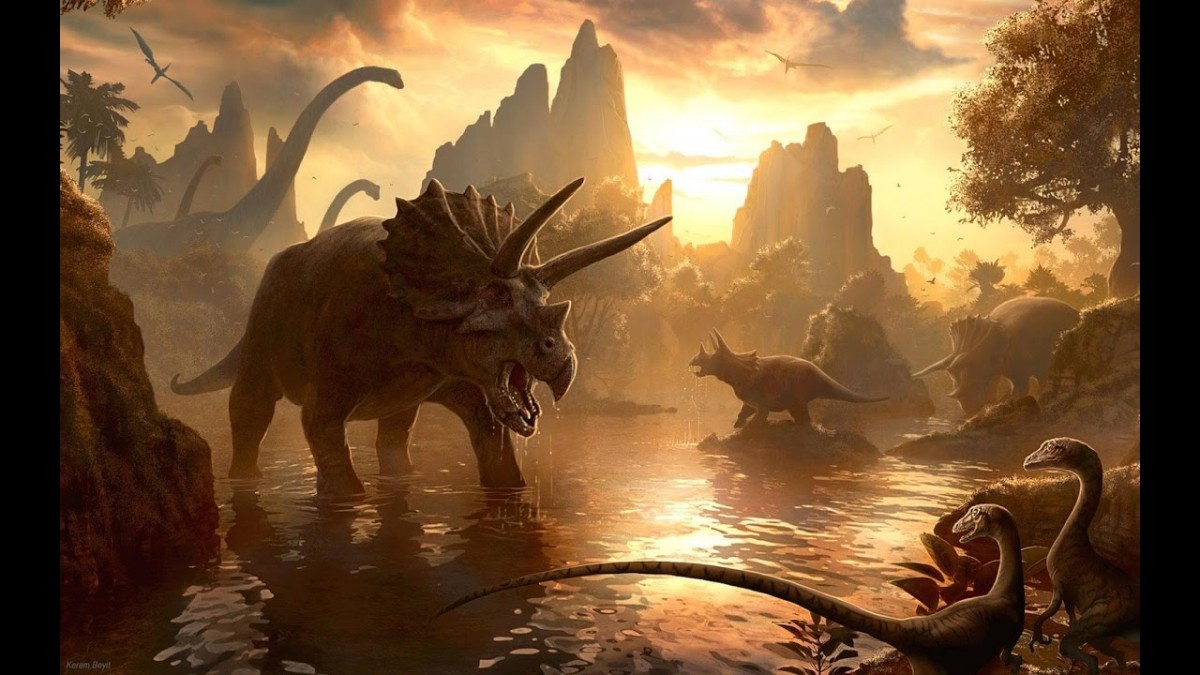 How the darkness and the cold killed the dinosaurs

Sixty six million years ago, the sudden extinction of the dinosaurs started the ascent of the mammals, ultimately resulting in humankind’s reign on Earth. Climate scientists now reconstructed how tiny droplets of sulfuric acid formed high up in the air after the well-known impact of a large asteroid and blocking the sunlight for several years, had a profound influence on life on Earth. Plants died, and death spread through the food web. Previous theories focused on the shorter-lived dust ejected by the impact. The new computer simulations show that the droplets resulted in long-lasting cooling, a likely contributor to the death of land-living dinosaurs. An additional kill mechanism might have been a vigorous mixing of the oceans, caused by the surface cooling, severely disturbing marine ecosystems. “The big chill following the impact of the asteroid that formed the Chicxulub crater in Mexico is a turning point in Earth history,” says Julia Brugger from the Potsdam Institute for Climate Impact Research (PIK), lead author of the study to be published in the Geophysical Research Letters. “We can now contribute new insights for understanding the much debated ultimate cause for the demise of the dinosaurs at the end of the Cretaceous era.” To investigate the phenomenon, the scientists for the first time used a specific kind of computer simulation normally applied in different contexts, a climate model coupling atmosphere, ocean and sea ice. They build on research showing that sulfur-bearing gases that evaporated from the violent asteroid impact on our planet’s surface were the main factor for blocking the sunlight and cooling down Earth.

In the tropics, annual mean temperature fell from 27 to 5 degrees Celsius

“It became cold, I mean, really cold,” says Brugger. Global annual mean surface air temperature dropped by at least 26 degrees Celsius. The dinosaurs were used to living in a lush climate. After the asteroid’s impact, the annual average temperature was below freezing point for about 3 years. Evidently, the ice caps expanded. Even in the tropics, annual mean temperatures went from 27 degrees to mere 5 degrees. “The long-term cooling caused by the sulfate aerosols was much more important for the mass extinction than the dust that stays in the atmosphere for only a relatively short time. It was also more important than local events like the extreme heat close to the impact, wildfires or tsunamis,” says co-author Georg Feulner who leads the research team at PIK. It took the climate about 30 years to recover, the scientists found. In addition to this, ocean circulation became disturbed. Surface waters cooled down, thereby becoming denser and hence heavier. While these cooler water masses sank into the depths, warmer water from deeper ocean layers rose to the surface, carrying nutrients that likely led to massive blooms of algae, the scientists argue. It is conceivable that these algal blooms produced toxic substances, further affecting life at the coasts. Yet in any case, marine ecosystems were severely shaken up, and this likely contributed to the extinction of species in the oceans, like the ammonites.

The dinosaurs, until then the masters of Earth, made space for the rise of the mammals, and eventually humankind. The study of Earth’s past also shows that efforts to study future threats by asteroids have more than just academic interest. “It is fascinating to see how evolution is partly driven by an accident like an asteroid’s impact — mass extinctions show that life on Earth is vulnerable,” says Feulner. “It also illustrates how important the climate is for all lifeforms on our planet. Ironically today, the most immediate threat is not from natural cooling but from human-made global warming.”