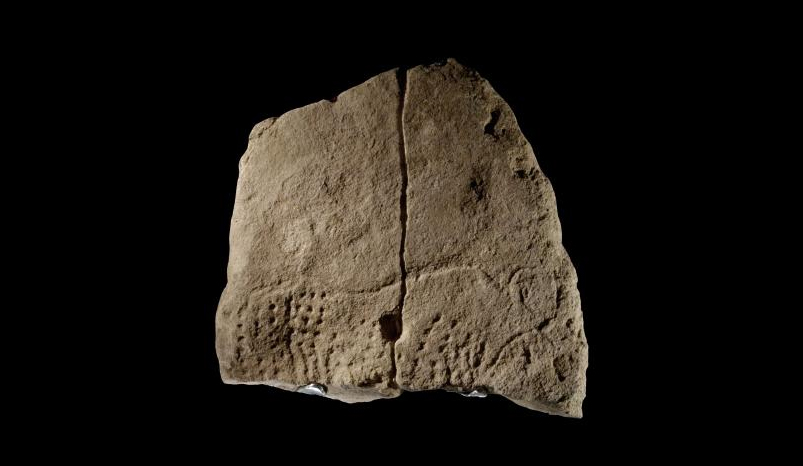 An international team of anthropologists has uncovered a 38,000-year-old engraved image in a southwestern French rockshelter—a finding that marks some of the earliest known graphic imagery found in Western Eurasia and offers insights into the nature of modern humans during this period.

“The discovery sheds new light on regional patterning of art and ornamentation across Europe at a time when the first modern humans to enter Europe dispersed westward and northward across the continent,” explains NYU anthropologist Randall White, who led the excavation in France’s Vézère Valley.

The findings, which appear in the journal Quaternary International, center on the early modern humans’ Aurignacian culture, which existed from approximately 43,000 to 33,000 years ago.

Abri Blanchard, the French site of the recently uncovered engraving, a slab bearing a complex image of an aurochs, or wild cow, surrounded by rows of dots, was previously excavated in the early 20th century. White and his team members began their methodical exploration of remaining deposits at the site in 2011, with the discovery occurring in 2012.

White contends that Aurignacian art offers a window into the lives and minds of its makers—and into the societies they created.

“Following their arrival from Africa, groups of modern humans settled into western and Central Europe, showing a broad commonality in graphic expression against which more regionalized characteristics stand out,” he explains. “This pattern fits well with social geography models that see art and personal ornamentation as markers of social identity at regional, group, and individual levels.”

Abri Blanchard and its sister site, Abri Castanet, previously excavated by White’s team, have long been recognized as being among the oldest sites in Eurasia bearing artifacts of human symbolism. Over time, hundreds of personal ornaments have been discovered, including pierced animal teeth, pierced shells, ivory and soapstone beads, engravings, and paintings on limestone slabs.