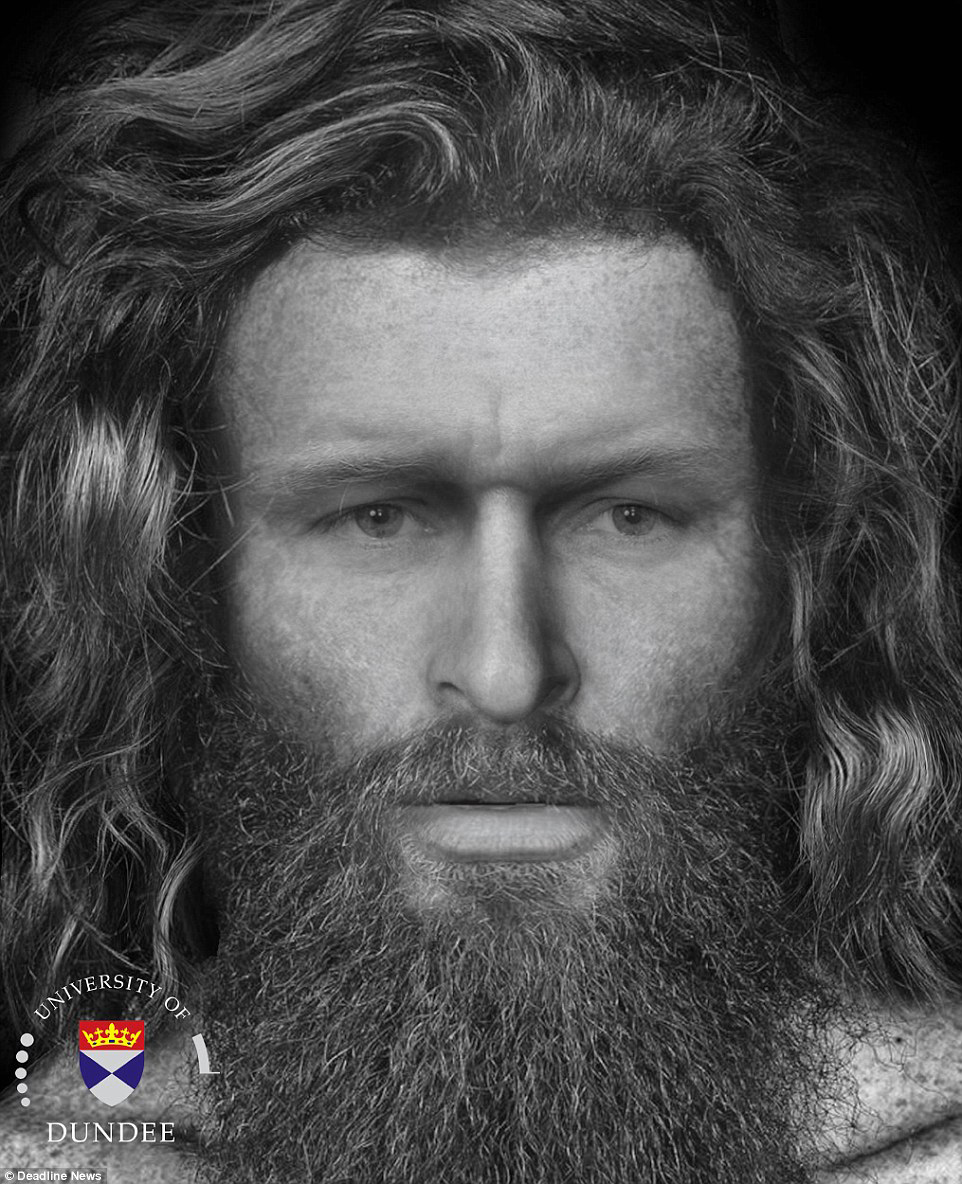 Researchers from the University of Dundee’s Centre for Anatomy and Human Identification (CAHID) have reconstructed the face of a Pictish man they showed to have been brutally murdered 1,400 years ago.

Archaeologists excavating a cave in the Black Isle, Ross-shire, were astonished to find the skeleton of a man buried in a recess of the cave. The body had been placed in an unusual cross-legged position, with large stones holding down his legs and arms.

The bones were sent to CAHID’s world-renowned forensic anthropologist Professor Dame Sue Black, whose team –including Dr Christopher Rynn and PhD students Micol Zuppello, Viviane Lira and Samantha Goodchild– have been able to describe in detail the horrific injuries he sustained as well as to digitally reconstruct what he looked like.

They identified at least five impacts that resulted in fracturing to the face and skull, allowing them to compile a detailed account of how the man died.

Professor Black said, “This is a fascinating skeleton in a remarkable state of preservation which has been expertly recovered. From studying his remains we learned a little about his short life but much more about his violent death. As you can see from the facial reconstruction he was a striking young man, but he met a very brutal end, suffering a minimum of five severe injuries to his head.

“The first impact was by a circular cross-section implement that broke his teeth on the right side. The second may have been the same implement, used like a fighting stick which broke his jaw on the left.  The third resulted in fracturing to the back of his head as he fell from the blow to his jaw with a tremendous force possibly onto a hard object perhaps stone.

“The fourth impact was intended to end his life as probably the same weapon was driven through his skull from one side and out the other as he lay on the ground. The fifth was not in keeping with the injuries caused in the other four where a hole, larger than that caused by the previous weapon, was made in the top of the skull.”

A bone sample sent for radiocarbon dating indicates that he died sometime between 430 and 630 A.D., commonly referred to as the Pictish period in Scotland.

The skeleton was discovered when a team of volunteers were digging to determine when the cave might have been occupied. Below substantial layers relating to cave-use since the turn of the 20th century, they found evidence that the cave had been used for iron-smithing during the Pictish period.

Hearths and extensive iron-working debris indicate that the cave was selected specifically for this use, but the totally unexpected find of the skeleton gave the cave a completely different significance.

Excavation leader Steven Birch said, “Having specialised in prehistoric cave archaeology in Scotland for some years now, I am fascinated with the results. Here, we have a man who has been brutally killed, but who has been laid to rest in the cave with some consideration –placed on his back, within a dark alcove, and weighed down by beach stones.

“While we don’t know why the man was killed, the placement of his remains gives us insight into the culture of those who buried him. Perhaps his murder was the result of interpersonal conflict; or was there a sacrificial element relating to his death?”

The Rosemarkie Caves Project seeks to investigate the archaeology of caves in the Black Isle. For some years, the group has been locating and accurately surveying the series of caves extending for several miles along the coast of the Black Isle.

A number of small test-pit excavations over the last few years have provided evidence that the caves were being occupied, or at least utilised in some way, from 1,500-2,000 years ago. The cave excavation has also provided information about the more recent past, including objects left behind by occupants and temporary travellers living inside the cave 200 to 300 years ago. Evidence from this later period suggests that the inhabitants were making, or repairing, leather shoes, possibly for distribution to local communities on the Black Isle.

Ongoing specialist analysis on the skeleton and artefacts from the cave is expected to provide more details of the man’s place of origin and significance as well as provide more information about the cave’s archaeological and historical importance.