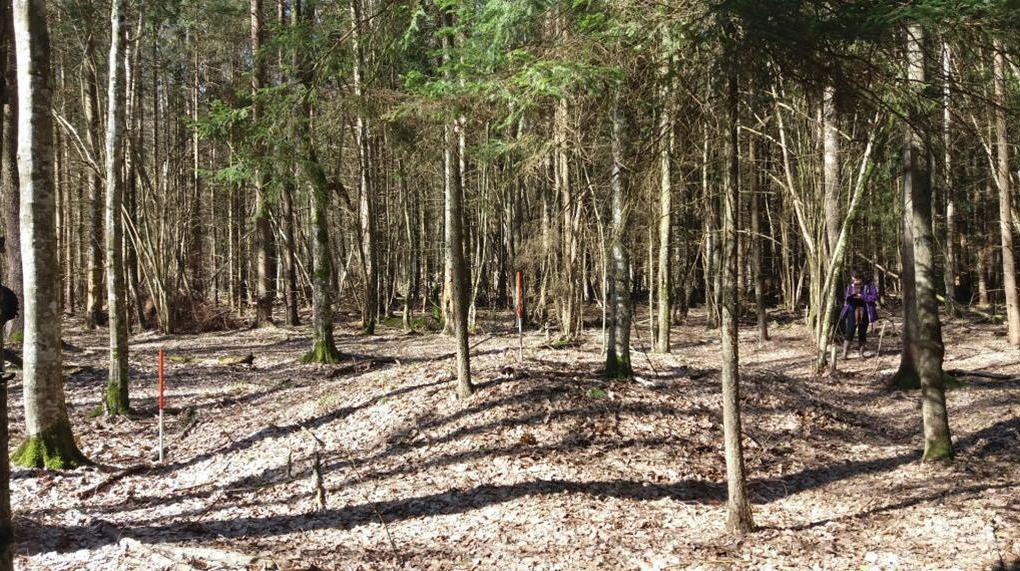 Barrows and outlines of ancient fields found in the Białowieża Forest

With the use of airborne laser scanning

Several dozens of 1.5 thousand years old barrows, outlines of ancient fields, and even a fortified settlement – these are some of the discoveries made by scientists in the Białowieża Forest. Findings have been made possible by the use of airborne laser scanning.

Researchers from the Institute of Archaeology of the Cardinal Stefan Wyszyński University in Warsaw focused on the study of both the area of the Bialowieza National Park and the adjacent area from the north-west. This is mostly a forested area, which makes typical archaeological surveys difficult.

“We discovered, among other things, a large cluster of barrows preliminarily dated to the period of Roman influence (1st-5th century), a fortified settlement, outlines of fields and numerous mounds, some of which were remnants of industrial activity in the forest, including tar extraction facilities and charcoal piles,” PAP Roman Szlązak, a doctoral student from the Institute of Archeology of the Cardinal Stefan Wyszyński University in Warsaw said. Charcoal pile is a pile of wood, covered by turf or soil, arranged in a dome shape. As a result of burning wood under such conditions, that is, with small, controlled air access, charcoal was produced.

The discoveries were made mainly with the use of airborne laser scanning (ALS). Archaeologists typically identify potential sites associated with ancient human activity based on fragments of prehistoric ceramic vessels or stone tools found on the ground (often in crop fields). However, the area covered with trees and covered with litter makes it difficult to determine whether it was once inhabited. The solution is ALS, which makes it possible to detect objects such as settlements or mounds – even when they are located in the forest. In addition to data from the ALS, researchers have used historical and geological maps.

“Because of the strict regulations concerning the protection of the natural heritage in the Białowieża National Park and the adjoining reserves, we can not conduct excavations there. We visited the sites selected with ALS. Following these inspections, we were able to determine their initial function and chronology,” added Dr. Joanna Wawrzeniuk from the Institute of Archaeology of the Cardinal Stefan Wyszyński University.

In some places, researchers also used GPR georadar. This geophysical method is based on the emission of short-wave electromagnetic waves.

Archaeologists draw particular attention to the discovery of a cluster of 25 barrows. It is located in the northern part of the Białowieża National Park. According to the researchers, they were made by representatives of the community of the Wielbark culture, which archaeologists associate with the Goths.

Several barrows are located at the intersections of elevated earthen strips, probably bounds or roads separating ancient arable fields. According to the researchers, drilling or surveys are necessary to determine the exact time of construction of discovered structures.

The second place worth mentioning is the fortified settlement on the river Orłówka, found by employees of the Institute of Archaeology of the Cardinal Stefan Wyszyński University in 2015. However, only this year archaeologists confirmed its chronology in the field.

The settlement on the circular plan, about 30 meters in diameter, is surrounded by a small, about 3 meters wide motte, now reaching a height of half a meter. This year archaeologists found fragments of ceramic vessels and flint tools. Based on these finds, they determined that the area was inhabited already in prehistory. The youngest relics come from the late Middle Ages, the supposed period of existence of the settlement.

According to the researchers, the fort was strategically built on a hillside surrounded by marshes, adjoining the northern bank of the river. It was probably a watch outpost.

Within half a kilometre of the fort, researchers have discovered traces of ancient fields, remains of the dike, and mounds.

“The confrontation of our research with the palynological graphs (based on the analysis of particulate samples) made by the Mammal Research Institute of the Polish Academy of Sciences allows to conclude that the study area of the forest was sporadically inhabited by humans,” Dr. Wawrzeniuk concluded.

Researchers have only just begun their research project, which will continue for three years. Their work is financed by the National Science Centre as part of the project “Cultural and natural heritage of the Białowieża Forest”, headed by Prof. Przemysław Urbańczyk from the Institute of Archaeology of the Cardinal Stefan Wyszyński University.