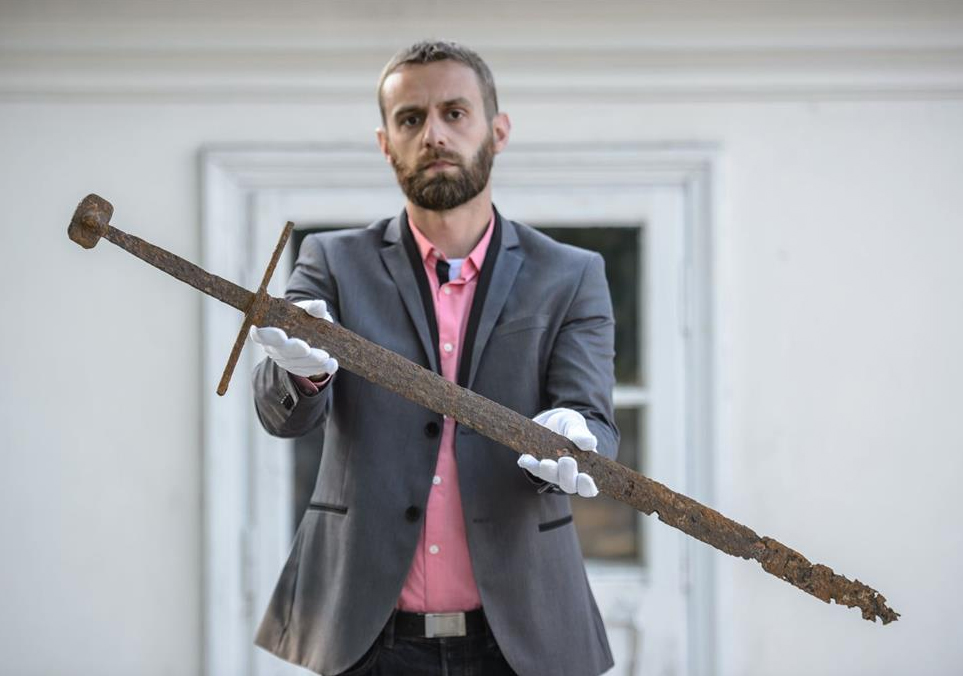 A completely preserved medieval sword from the 14th century has been discovered at a peat bog near Hrubieszów. The finder donated the artefact to the local Fr. Stanisław Staszic Museum. “This is a unique find in the region,” said Bartłomiej Bartecki, director of the museum.

The sword was discovered last week in the Commune of Mircze, a dozen kilometers south of Hrubieszów. The founder donated the artefact to the Museum in Hrubieszów. The weapon is corroded, but preserved almost entirely. Only the hilt has not survived to our time.

“The place where the discovery was made is a wetland and a peat bog. It is possible that an unlucky knight was pulled into the marsh, or simply lost his sword,” Bartłomiej Bartecki, director of Fr. Stanisław Staszic Museum in Hrubieszów, said.

This two handed sword was a typical weapon in the 14th century. “It is very light—it originally weighed about 1.5 kg. Today it measures about 120 cm,” Bartecki added. In his opinion the sword was very well made; it is well balanced, perfect for fencing.

On the rear bar of the weapon there is a clear sign of an isosceles cross inscribed in the shape of an heraldic shield, probably made by the blacksmith. Bartecki explained that it was a kind of a maker’s brand. This symbol was normally not visible, because the bar was covered by a hilt made of wood, bone or antler.

“This is a unique find in the region. It is worth pointing out that while there are similar artefacts in museum collections, their places of discovery is often unknown, and that is very important information for historians and archaeologists,” he noted.

In the coming days archaeologists will go to the place of discovery. They intend to carry out limited excavations. This could shed light on the circumstances in which the weapon ended up in the ground. Scientists hope to discover the missing elements of the knight’s equipment.

The museum director emphasised that the attitude of the accidental discoverer was “exemplary”. In his opinion, reporting of archaeological finds to the competent relevant services is becoming the norm. In April, an exhibition was opened at the Hrubieszów Museum that presented more than 500 items, most of which were handed over to the museum by accidental finders. “These were objects of exceptional scientific and artistic value,” Bartecki noted.

The sword will undergo conservation in Warsaw. “This treatment will also help determine its owner. We believe that there could be engraved signs on the blade near the hilt; those were most often made by swordmakers who marked swords for the knights. This could help us determine the origin of the weapon,” believes Bartecki.

The director of the museum assured that after the conservation and analyses, the sword would become part of the main exhibition at the Museum in Hrubieszów.