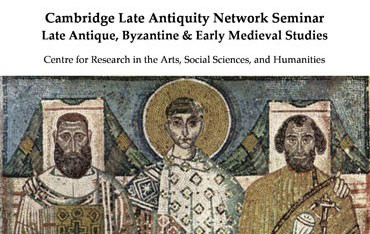 Late antique and early medieval studies have, in the past three decades, become an important growth area across several disciplines. This has been driven by a move away from the traditional narrative of “decline and fall” towards an approach that stresses elements of transformation and continuity linking the periods traditionally labelled as ‘Late Roman’, ‘Medieval’ and ‘Byzantine’. This revitalised interest has been reflected in the establishment of interdisciplinary research centres dedicated to the period at many universities, both in the UK and abroad. Cambridge has until now been lacking any such structure, with the result that academic staff and graduate students working on the late and post-Roman world, dispersed as they are across a number of different faculties and departments, have not had any regular opportunities for common discussion. The aim of this seminar is to bridge the gap between these different departments and facilitate exchanges between them, as well as fostering a greater sense of community among academics working on this period.

The seminar takes as its scope the period from the later third century down to the tenth, in Europe and the Mediterranean basin, approaching the question of the transition from the ancient to the medieval world from as wide a chronological and geographical angle as possible, in order to take fullest advantage of the broad range of academic talent and approaches within Cambridge. The seminar is intended primarily for papers by speakers from outside Cambridge, in order to create more opportunities to form links with specialists from other universities in an informal context.

Tuesday 28th November
Aaron Pelttari (University of Edinburgh), “Literary trends and the In Evangelia of Severus, bishop of Málaga”