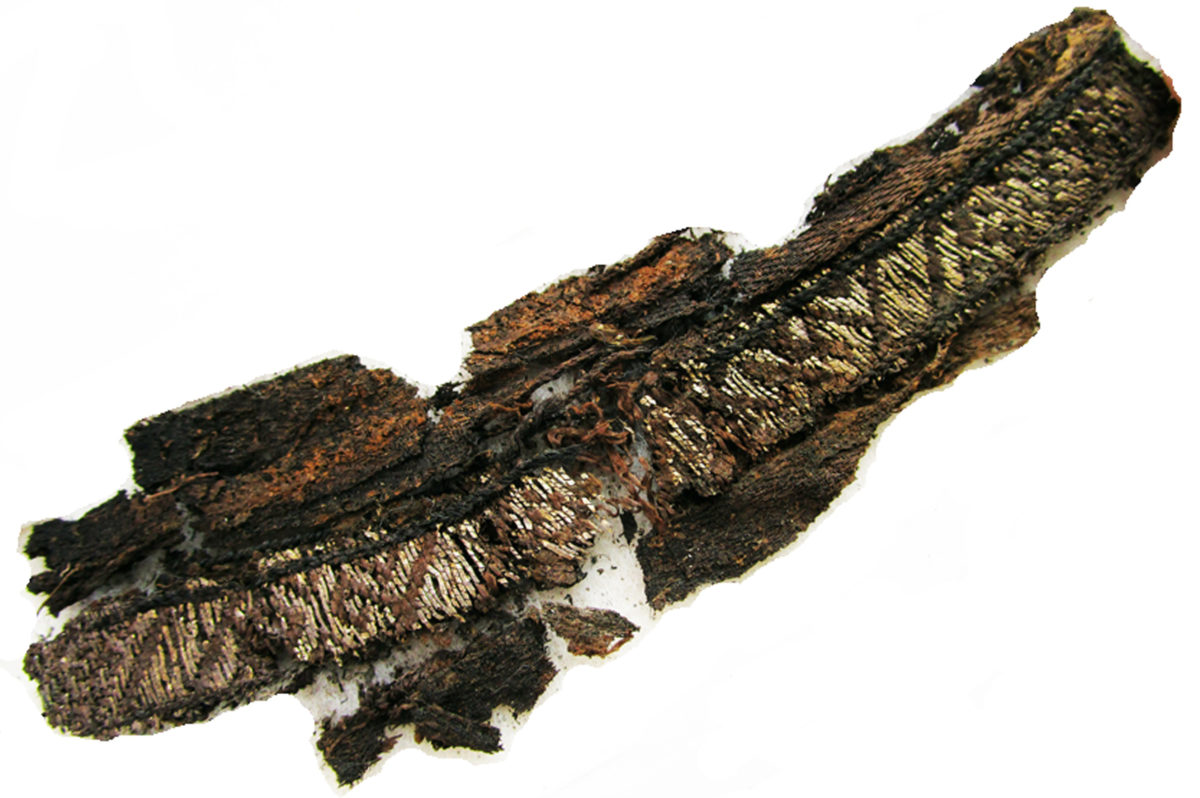 What was previously thought to be typical Viking Age patterns in silver have now proven to be geometric Kufic characters.

These are the findings of new research at Uppsala University. The Arabic characters appear in burial costumes in Viking Age boatgraves, as well as in the chamber graves clothing of central Viking Age sites such as Birka in Mälardalen.

“One exciting detail is that the word ‘Allah’ is depicted in mirror image,” says Annika Larsson, researcher in textile archaeology at the Department of Archaeology and Ancient History at Uppsala University. “It is a staggering thought that the bands, just like the costumes, was made west of the Muslim heartland. Perhaps this was an attempt to write prayers so that they could be read from left to right, but with the Arabic characters they should have. That we so often maintain that Eastern objects in Viking Age graves could only be the result of plundering and eastward trade doesn’t hold up as an explanatory model because the inscriptions appear in typical Viking Age clothing that have their counterparts in preserved images of Valkyries.”

It was while working to recreate textile patterns for the Viking Couture exhibit at Enköping Museum, Enköping, Sweden, that the researchers discovered that the woven bands contained ancient Arabic script, Kufic characters, invoking both Allah and Ali. The Kufic characters were found in the Viking Age in mosaics on burial monuments and mausoleums, primarily in Central Asia. Similar Kufic characters appear in the grave costumes in Viking Age chamber graves in central sites such as Birka in Mälardalen, as well as in boatgraves in the area around Gamla Uppsala.

“Presumably, Viking Age burial customs were influenced by Islam and the idea of an eternal life in Paradise after death,” says Larsson. “Grave goods such as beautiful clothing, finely sewn in exotic fabrics, hardly reflect the deceased’s everyday life, just as little as the formal attire of our era reflects our own daily lives. The rich material of grave goods should rather be seen as tangible expressions of underlying values.”

In her earlier research, Annika Larsson has emphasised the widespread occurrence of Eastern silk in Scandanavia’s Viking Age graves. In the Valsgärde boat graves, just north of the key Early Iron Age site Gamla Uppsala, findings of silk in the clothing of those buried are far greater than findings of wool and linen. Analyses of materials, weaving techniques and design suggest ancient Persian and Central Asian origin.

“In the Quran, it is written that the inhabitants of Paradise will wear garments of silk, which along with the text band’s inscriptions may explain the widespread occurrence of silk in Viking Age graves,” says Annika Larsson. “The findings are equally prevalent in both men’s and women’s graves. “Presumably, Viking Age burial customs were influenced by Islam and the idea of an eternal life in Paradise after death.”

Larsson’s research findings are presented as part of the Viking Couture exhibition at Enköping Museum. The project is funded by the Swedish Foundation for Humanities and Social Sciences, which is conducting a pilot project aimed at presenting new research in the form of exhibitions. The project uses research methods other than the usual theoretical, because the results are intended to reach a wider audience than just academics. Exhibitions are largely based on visual communication, and one method for this is recreation processes, such as that of the textile bands.

The textile archaeological project group also includes artists Shabnam Faraee and Ylva Ceder, as well as textile master student, Karolina Pallin, who has recreated the woven bands for the exhibition.

In an integrated sub-project, DNA analyses are performed on human remains from relevant graves, in collaboration with Professor Marie Allen and her research team at the Department of Immunology, Genetics and Pathology at Uppsala University. It is hoped that the sensitive DNA analysis methods will help provide answers to questions on kinship and geographic origin.