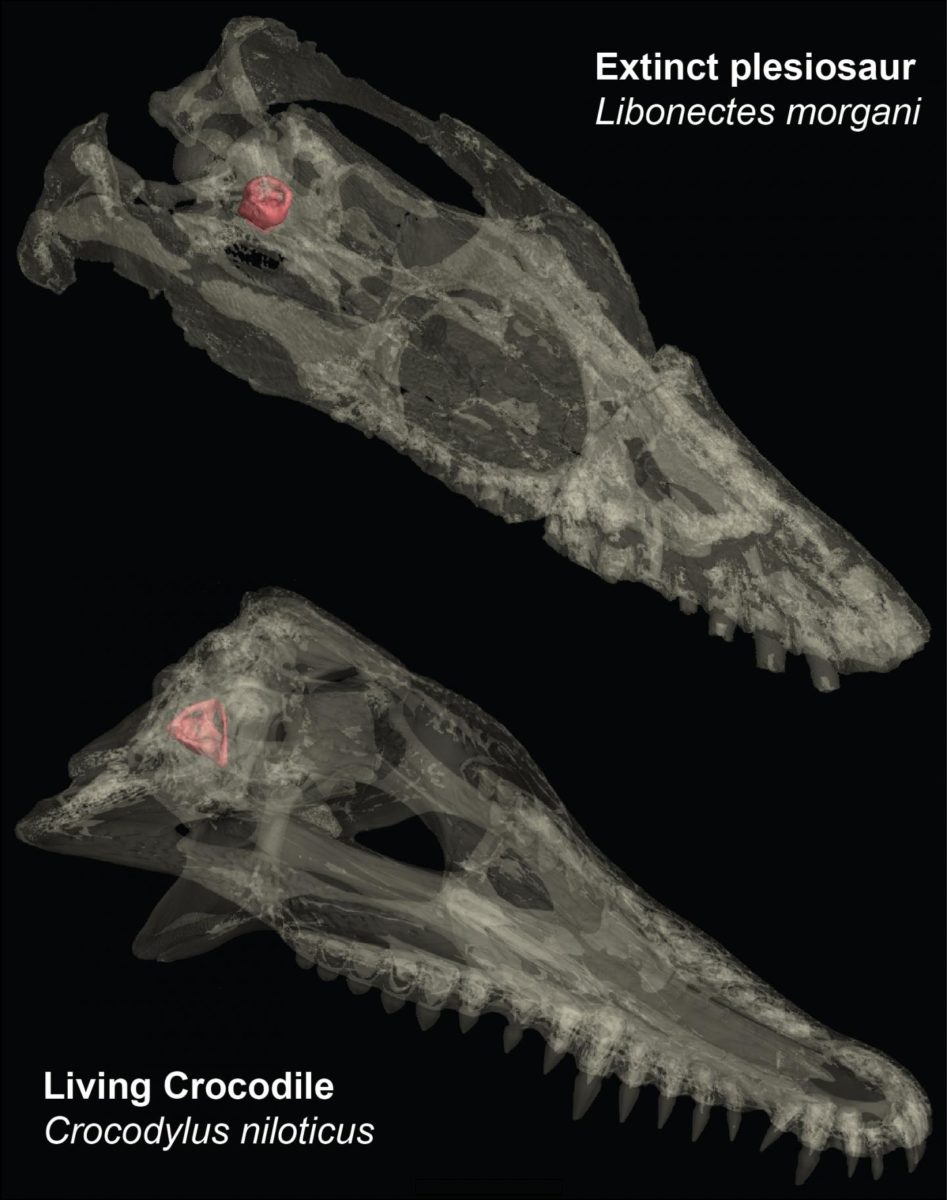 Evolution: It’s all in the ears

The inner ears of extinct aquatic reptiles from millions of years ago closely resemble those of some living aquatic animals with similar lifestyles or body proportions, including crocodiles, sea turtles and whales.

A new study by a team of international experts, led by Dr James Neenan, a Postdoctoral Fellow at the Evolutionary Studies Institute at Wits University in South Africa, has revealed that a completely extinct group of marine reptiles called sauropterygians evolved similar inner ear proportions to those of some modern day aquatic reptiles and mammals. Sauropterygians were swimming reptiles from the ‘Age of Dinosaurs’ that included some semi-aquatic forms, nearshore swimmers and fully-aquatic ‘underwater-flyers’.

Their most famous members are the plesiosaurs, ferocious sea monsters similar to depictions of the mythical Loch Ness Monster, with four flippers that hunted anything from small fish and squid to large marine reptiles.

In all vertebrate animals, from fish to humans, the inner ear contains an important sense organ that helps us to keep our balance and orientation. This organ is particularly interesting in aquatic animals as they live in a three-dimensional environment, so have different sensory inputs compared to those that live on land. It is therefore very useful for detecting differences in locomotion in extinct animals, especially when compared to those of living organisms.

Researchers were surprised when sauropterygians with very different lifestyles had evolved inner ears that were very similar to those of some modern animals. “Sauropterygians are completely extinct and have no living descendants, so I was amazed to see that nearshore species with limbs that resemble those of terrestrial animals had ears similar to crocodylians and that the fully-aquatic, flippered plesiosaurs had ears similar to sea turtles,” says Neenan.

The similarities don’t end there. Some groups of plesiosaurs, the ‘pliosauromorphs’, evolved enormous heads and very short necks, a body shape that is shared by modern whales. Whales have the unusual feature of having highly miniaturized inner ears (blue whales have a similar-sized inner ear to humans!), possibly the result of having such a short neck. Neenan and colleagues have now shown that ‘pliosauromorph’ plesiosaurs also have a reduced inner ear size, supporting this idea.

These interesting results are the product of convergent evolution, the process in which completely unrelated organisms evolve similar solutions to the same evolutionary hurdles.

“Nearshore sauropterygians swam in a similar way and had comparable lifestyles to modern-day crocodiles, so had similar inputs on the inner ear organ,” says Neenan. “Plesiosaurs also ‘flew’ under water with similar flippers to those of sea turtles, so it’s not surprising that the organ of balance and orientation evolved to be a similar shape between these unrelated groups.”

Neenan recently moved to Wits from the University of Oxford in the UK, where he carried out the large-scale study, which even included a 140-million-year-old plesiosaur from near Nelson Mandela Bay, Eastern Cape province. He has now joined Wits to help figure out how the inner ears of dinosaurs and the ancestors of today’s crocs grew and functioned.

“Research like Dr Neenan’s is bringing life to extinct animals,” says Prof Jonah Choiniere, a Wits University faculty member involved in the study. “We are greatly looking forward to what he can tell us about South Africa’s dinosaurs.”

While this work was an international effort, four of the authors have long-standing research collaborations with Wits University, and this sort of multinational research is putting South Africa in a leading position in palaeontology.