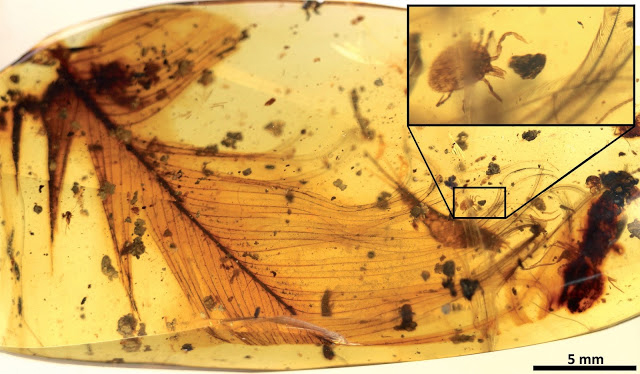 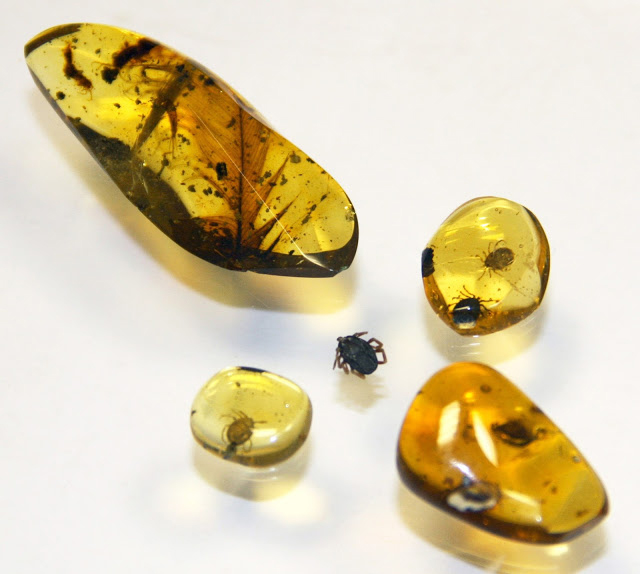 Fossilised ticks discovered trapped and preserved in amber show that these parasites sucked the blood of feathered dinosaurs almost 100 million years ago, according to a new article published in Nature Communications.

Sealed inside a piece of 99 million-year-old Burmese amber researchers found a so-called hard tick grasping a feather. The discovery is remarkable because fossils of parasitic, blood-feeding creatures directly associated with remains of their host are exceedingly scarce, and the new specimen is the oldest known to date.

The scenario may echo the famous mosquito-in-amber premise of Jurassic Park, although the newly-discovered tick dates from the Cretaceous period (145-66 million years ago) and will not be yielding any dinosaur-building DNA: all attempts to extract DNA from amber specimens have proven unsuccessful due to the short life of this complex molecule.

“Ticks are infamous blood-sucking, parasitic organisms, having a tremendous impact on the health of humans, livestock, pets, and even wildlife, but until now clear evidence of their role in deep time has been lacking,” says Enrique Peñalver from the Spanish Geological Survey (IGME) and leading author of the work.

“The fossil record tells us that feathers like the one we have studied were already present on a wide range of theropod dinosaurs, a group which included ground-running forms without flying ability, as well as bird-like dinosaurs capable of powered flight,” explains Dr Ricardo Pérez-de la Fuente, a research fellow at Oxford University Museum of Natural History and one of the authors of the study.

“So although we can’t be sure what kind of dinosaur the tick was feeding on, the mid-Cretaceous age of the Burmese amber confirms that the feather certainly did not belong to a modern bird, as these appeared much later in theropod evolution according to current fossil and molecular evidence”.

The researchers found further, indirect evidence of ticks parasitising dinosaurs in Deinocroton draculi, or “Dracula’s terrible tick”, belonging to a newly-described extinct group of ticks. This new species was also found sealed inside Burmese amber, with one specimen remarkably engorged with blood, increasing its volume approximately eight times over non-engorged forms. Despite this, it has not been possible to directly determine its host animal.

“Assessing the composition of the blood meal inside the bloated tick is not feasible because, unfortunately, the tick did not become fully immersed in resin and so its contents were altered by mineral deposition,” explains Dr Xavier Delclòs, an author of the study from the University of Barcelona and IRBio.

But indirect evidence of the likely host for these novel ticks was found in the form of hair-like structures, or setae, from the larvae of skin beetles (dermestids), found attached to two Deinocroton ticks preserved together. Today, skin beetles feed in nests, consuming feathers, skin and hair from the nest’s occupants. And as no mammal hairs have yet been found in Cretaceous amber, the presence of skin beetle setae on the two Deinocroton draculi specimens suggests that the ticks’ host was a feathered dinosaur.

“The simultaneous entrapment of two external parasites – the ticks – is extraordinary, and can be best explained if they had a nest-inhabiting ecology as some modern ticks do, living in the host’s nest or in their own nest nearby,” says Dr David Grimaldi of the American Museum of Natural History and an author of the work.

Together, these findings provide direct and indirect evidence that ticks have been parasitising and sucking blood from dinosaurs within the evolutionary lineage leading to modern birds for almost 100 million years. While the birds were the only lineage of theropod dinosaurs to survive the mass extinction at the end of the Cretaceous 66 million years ago, the ticks did not just cling on for survival, they continued to thrive.