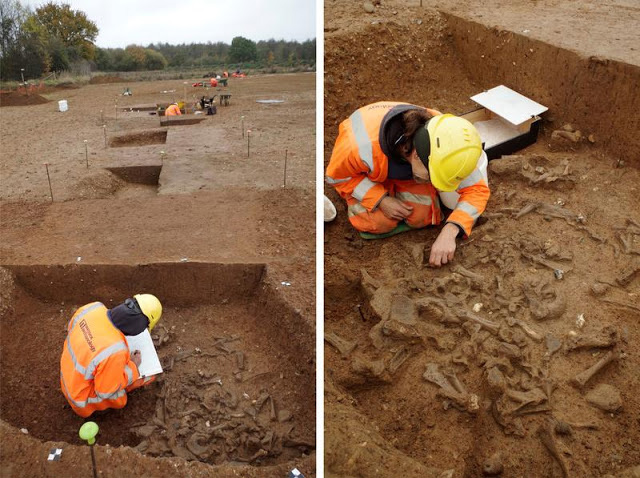 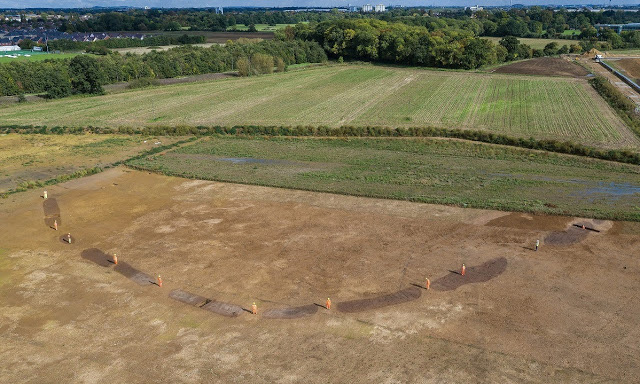 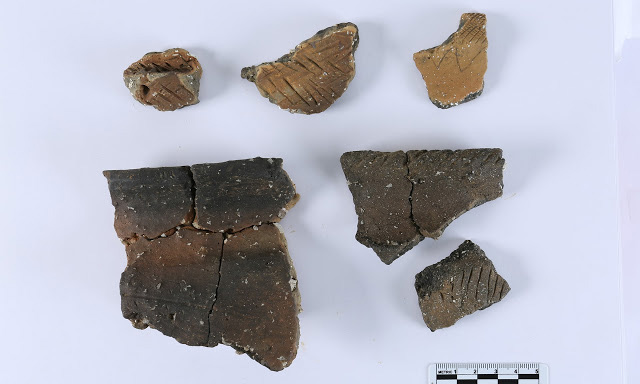 A major 5,500 year old Neolithic ceremonial gathering place known as a causewayed enclosure has been partially uncovered within sight of Windsor Castle in Berkshire. The discovery was made at Riding Court Farm, near Datchet as part of CEMEX UK’s archaeological programme on the quarrying site, which is monitored on behalf of the local planning authority by Berkshire Archaeology.

Defined by encircling bank and ditch segments with gap entrances, such sites represent some of the earliest known acts of monument building in Britain. Around 80 monuments have been identified across Britain, and others are known on the Continent. The Riding Court causewayed enclosure may have been seasonally occupied, a place where communities gathered to undertake ceremonial feasting, exchange of goods, the marking of festivals and social obligations. Imported objects found in other enclosures suggest trade and exchange of exotic objects (stone axes and pottery), while evidence of feasting and human burials are known from other sites.

One feature is the deliberate consumption and wasting of meat and the exposure of human remains including the placing of skulls in the base of ditches. There are signs that pots were deliberately smashed perhaps as festivities came to a close.

John Powell, fieldwork director for Wessex Archaeology, said: “The discovery of, and chance to excavate an early Neolithic causewayed enclosure is incredibly rare. The enclosure lies within the central area of the quarry and future work will allow us to systematically excavate and study the site’s surrounding landscape. We will be able to see how the Neolithic community influenced their natural landscape and the lives of later people by leaving their mark on the land.

“Although we have only uncovered part of the site so far, the monument appears to be an oval shape with a projected perimeter of 500 metres. Currently 265 metres of the enclosure’s arc—some 12 ditch segments—have been traced with the remainder due to be uncovered in 2018. The monument occupies a slightly raised area in what may have been a marshy or seasonably wet landscape within the Thames floodplain. Towards the base of the ditches, small concentrations of animal bone, pottery and worked flint have been found and probably relate to the activities that took place within the enclosure. The finds include finely worked flint arrowheads, knives and serrated blades, decorated pottery sherds and in one segment part of a human skull. A sparse scatter of internal features included a pit that contained a finely ground flint axe.”

Roland Smith of Berkshire Archaeology added: “This is such an exciting and important discovery in the Royal Borough. The excavation of this monument will add so much to our shared human story, especially at this pivotal time in the earliest years of farming in Britain. CEMEX UK has been extremely conscientious in addressing the archaeology of this site and I applaud their commitment to ensuring this ancient prehistoric monument will be thoroughly investigated by Wessex Archaeology”.

The enclosure at Datchet lies within the well populated Neolithic landscape of the Middle Thames Valley that includes cursus monuments, timber framed houses and middens. Its excavation will add significant new evidence to a dynamic period of prehistory.  Along the northern bank of the River Thames three similar monuments have been identified within a 15 km stretch of the River Thames: one to the south-east, down river, at Staines and two others to the west, up river, at Eton Wick and Dorney.

As well as the enclosure, archaeologists have found remains of several periods of prehistoric, Roman and later date activity. Traces that indicate people periodically lived, farmed, settled and gathered in the area from the end of the last Ice Age, a period of 12,000 years.