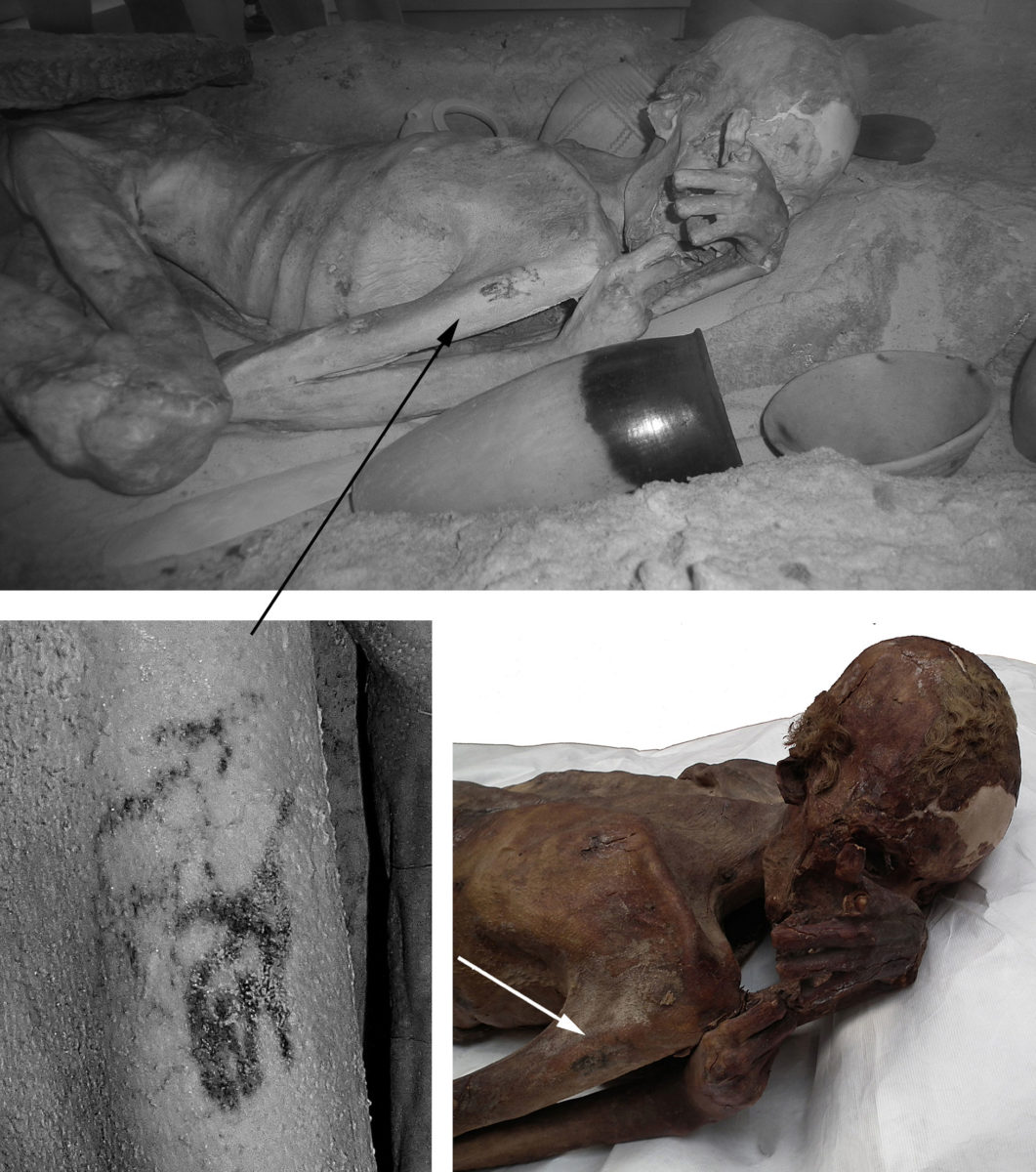 Dating to between 3351 to 3017 BC, tattoos of animals and motifs have been discovered on two naturally mummified bodies from Egypt. Using infrared technology, figural tattoos of a wild bull and a sheep were identified on the upper arm of a male mummy, while linear and S-shaped motifs have been identified on the upper arm and shoulder of a female mummy; these are the oldest tattoos ever found on a female individual.

“The use of the latest scientific methods, including CT scanning, radiocarbon dating and infrared imaging, has transformed our understanding of the Gebelein mummies. Only now are we gaining new insights into the lives of these remarkably preserved individuals. Incredibly, at over 5,000 years of age, they push back the evidence for tattooing in Africa by a millennium,” Daniel Antoine, Curator of Physical Anthropology, said.

The male mummy, known as ‘Gebelein Man A’ has been on display in the British Museum almost continuously since his discovery around 100 years ago. Previous CT scans showed that Gebelein Man A was a young man (18–21 years of age) when he died from a stab wound to the back.

Dark smudges on his arm, appearing as faint markings under natural light, had  remained unexamined. Infrared photography recently revealed that these smudges were in fact tattoos of two slightly overlapping horned animals. The horned animals have been tentatively identified as a wild bull (long tail, elaborate horns) and a Barbary sheep (curving horns, humped shoulder). Both animals are well known in Predynastic Egyptian art. The designs are not superficial and have been applied to the dermis layer of the skin, the pigment was carbon-based, possibly some kind of soot.

The female mummy, known as ‘Gebelein Woman’, has several tattoos; a series of four small ‘S’ shaped motifs can be seen running vertically over her right shoulder. Below them on the right arm is a linear motif which is similar to objects held by figures participating in ceremonial activities on painted ceramics of the same period.

It may represent a crooked stave, a symbol of power and status, or a throw-stick or baton/clappers used in ritual dance. The ‘S’ motif also appears on Predynastic pottery decoration, always in multiples.

The application of tattoos to the human body enjoyed a long and diverse history in many ancient cultures. At present the oldest surviving examples are the mainly geometric tattoos on the Alpine mummy known as Ötzi (4th millennium BC) whose skin was preserved by the ice of the Tyrolean Alps. Based on the radiocarbon dates, the Gebelein tattoos are approximately contemporary with Ötzi (3370–3100 BC), and can therefore be considered among the earliest surviving tattoos in the world.

These finds demonstrate conclusively that tattooing was practised during Egypt’s Predynastic period (c. 4000–3100 BC) by both men and women. As the oldest known tattooed figural motifs, they add to our understanding of the range of potential uses of tattoos at the dawn of ancient Egyptian civilisation and expand our view of the practice of tattooing in prehistoric times.

The full findings have been published in the Journal of Archaeological Science.