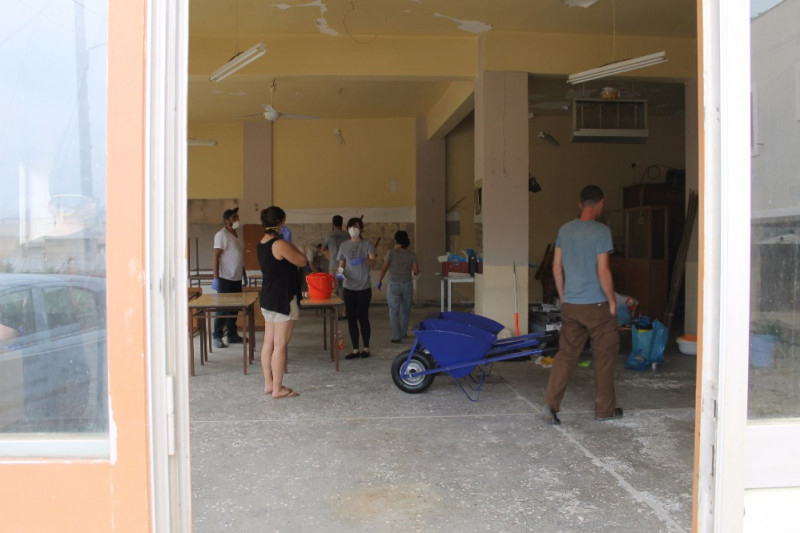 Between 2010 and 2012, Prof. Michael Lane of the Ancient Studies Dept. of UMBC and a small geophysical team, including UMBC graduates, undertook fieldwork, titled “AROURA,” which revealed an ancient landscape beneath the fields of the Kopaic Basin in central Greece. The landscape comprises remains of an irrigation system and the cultivated fields it served, all dating to the Late Bronze Age—ca. 1700–1100 BCE. Such a discovery is unparalleled in the region and bears important implications for archaeological understanding of the emergence of “Mycenaean Civilization” in Greece in that era. This archaeological culture is named after Mycenae, the capital of the leader of the Greeks at Troy, Agamemnon, and it is associated with the superhuman feats of the Age of Heroes. The results of AROURA were published in 2016 in the highly regarded Journal of Field Archaeology, vol. 41, no. 3, among other places (see http://www.umbc.edu/aroura).

Beginning in the summer of 2016, Prof. Lane, in collaboration with Dr. Elena Kountouri, head of the Directorate of Prehistoric and Classical Antiquities of the Ministry of Culture and Sports (ex officio), began to excavate throughout the AROURA research area. They aim futher to explore both Lane’s prior discoveries in the plain and Kountouri’s along the drainage system that now appears to have fed water—over 3,300 years ago—to the recently discovered irrigated fields­. Their joint project, titled “MYNEKO,” has provided fieldwork training and experience to dozens of Greek and American undergradutes, including students at UMBC (see http://myneko.umbc.edu). MYNEKO has already revealed further intricacies of the irrigation system, as well as having uncovered fortified settlements in the hills above the fields, from which beautiful Late Bronze Age artifacts have been unearthed. These sites must have maintained the irrigation system and benefited from increased agricultural production.
However, the wages of archaeological success are crate-loads of ancient artifacts, some of which have to be cleaned and conserved immediately—and all of which have to be stored securely. The overflowing guarded storerooms of the Thebes Archaeological Museum are 18 miles away via secondary roads, an hour round-trip and an eighth of a tank of gas there and back again.

From 2018 onward, Lane, applying for an excavation permit through the American School of Classical Studies in Athens, will expand MYNEKO’s operations, meticulously exacavating the archaeologically promising foritified site of Aghia Marina Pyrghos, which seems to have been inhabited from the Neolithic Age, more than 7,000 years ago, through the end of the Bronze Age, about 3,000 years ago. He also plans to carry out survey of and finds collection from the surrounding landscape. A direct consequence will be the accumulation of thousands more finds from the earth.
The letter of Greek law requires that all excavated finds be transported as frequently as possible, even daily, to a secure storeroom with an alarm system connected with the Ministry in Athens. As explained above, this stipulation presents an unprofitable burden to the researchers. Moreover, once further excavated artifacts have been cleaned, bagged, and crated, they will have to be taken away and made unavailable for study both to students and specialists, until some part of the confined space at the Museum can be claimed for work in a later study season. The optimal solution is for a suitable laboratory and storehouse to be created in the village of Kokkino, closer to the site of excavations, which is where the staff and students reside during the summer anyway. Thus finds could be cleaned, curated, catalogued, and stored safely for current and future research and analysis.

Prof. Lane has discovered an ideal place for the establishment of a permanent laboratory and storehouse. It is an old rotisserie taverna of about 100 sq. meters (ca 1,000 sq. ft) on the ground floor of the archaeological staff house in Kokkino (see photo above). It is conveniently near both the main street to and from the village and on the main square. The archaeological team already uses it as a layover for finds en route to the Thebes Archaeological Museum. In order for the space to qualify as an official permanent storage and analysis facility, it has to have, according to regulation

• steel bars over the windows

• steel roller shutters over the doors, and

• an alarm system connected by phone line to the     control center in the Ministry.

It is for these improvements that the MYNEKO team seeks funds. Private and public foundations do not fund overseas capital improvements of this kind, and Greek state institutions, now facing an unprecedented fiscal and financial crisis, simply cannot do so. However, modest donations from private individuals can add up quickly to cover the costs.

The transformation of the taverna into a permanent archaeological laboratory and storehouse will contribute to the local and regional economy. Mr. Dimitrios Katsavrias, a local master ironworker, estimates that the physical improvements will cost about 6,200 euros (ca U.S. $6,800, 1 May 2017; see appended update). The hard-wired alarm system will cost about $160 euros (ca $U.S. 175). Taking into account fluctuations in the currency exchange rate and minor cost overruns, the target total for donations is therefore about $7,000.
When in many years’ time archaeological fieldwork is finished in the area and most or all of the finds have found places in a museum, the improved building can resort to the community as the folklife center it has long considered constructing on the site.

What’s in it for Donors?

Donors’ “undying fame,” as Homer would have stated it, will be ensured with inscription on a plaque both in the new laboratory in Greece and in the Ancient Studies Dept. at UMBC (listed either by name or as “Anonymous”). Donors will be further entitled to offprints of all MYNEKO publications, should they request it, a commemorative T-shirt in their size.