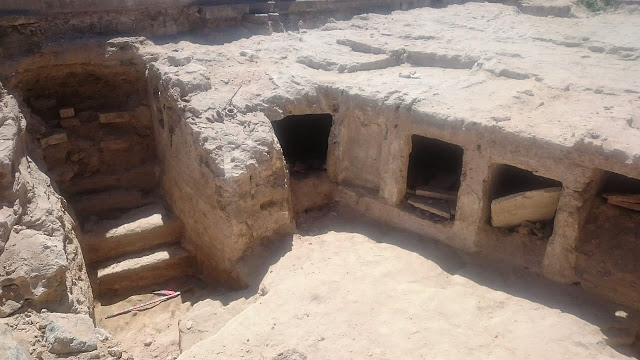 An Egyptian archaeological mission headed by Fahima El-Nahhas, General Director of Excavations in Alexandria, uncovered a section of Alexandria’s western cemetery that dates to the Ptolemaic era.

The cemetery was uncovered during the excavation work at the site before allowing the building of a modern wall in the railways workshops in Gebel El-Zaytoun in Alexandria.
Dr. Mostafa Waziri, Secretary General of the Supreme Council of Antiquities said that rescue excavations will continue in the area under the supervision of Dr. Khaled Abu-Ahmed, General Director of Alexandria Antiquities.

Dr. Ayman Ashmawy, Head of Ancient Egyptian Antiquities Sector said that the mission uncovered a collection of tombs engraved in rock, each consisting of stairs leading to a small hall that may had been used for tomb’s visitors to rest, as well as an open courtyard surrounded small burial shafts in rocks.

He added that preliminary examination has revealed that most probably were most likely used for a long period of time and they belong to poor individuals.

Some tombs have colored and decorated layers of plaster while others have no decoration at all.

Preliminary examination also shows that the architectural structure of some tombs was modified over time. Abou Hamad said that many clay pots and utensils used by the deceased’s family while they were visiting were found as well as lamps for lighting ornamented with animal scenes in addition to glass and pottery vessels and skeletons.