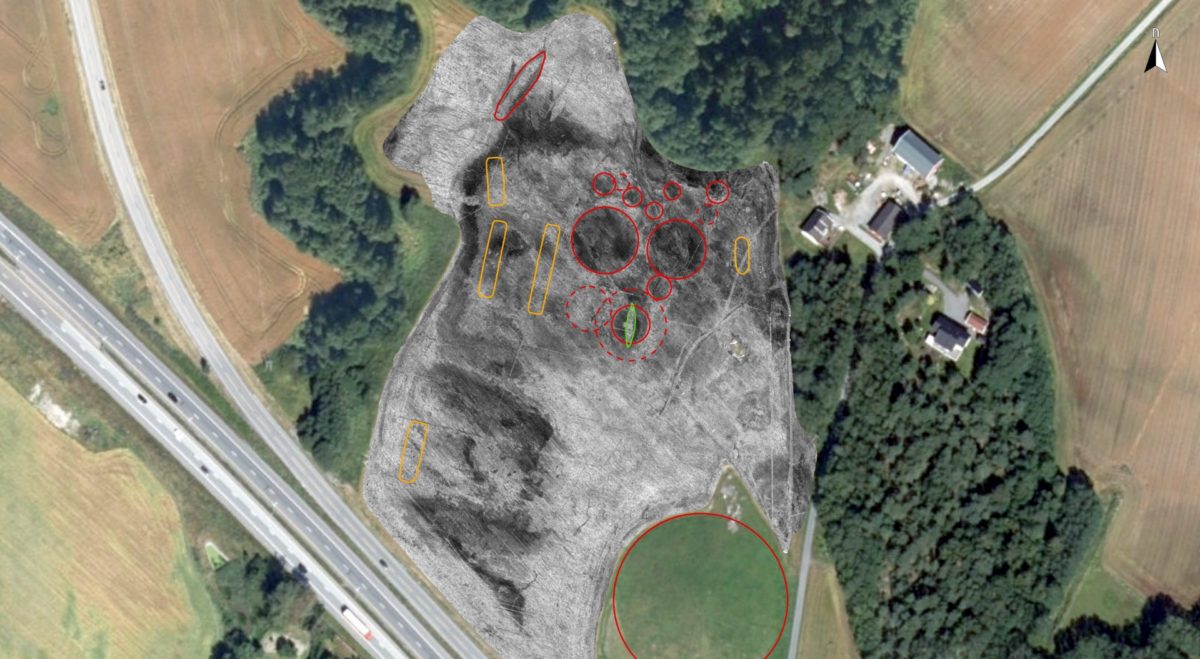 The lower part of the ship is still preserved

Archaeologists armed with a motorized high resolution georadar have found a Viking ship and a large number of burial mounds and longhouses in Østfold County in Norway.

The discoveries were made by archaeologists from the Norwegian Institute for Cultural Heritage Research (NIKU) with technology developed by the Ludwig Boltzmann Institute for Archaeological Prospection and Virtual Archaeology (LBI ArchPro).

The Viking ship find is just below the topsoil, at a depth of approximately 50 cm initially buried in a burial mound. The digital data visualisations reveal a large and well-defined 20 m long ship-shaped structure. The data indicate that the lower part of the ship is still preserved. Further non-invasive investigations are planned to digitally map the unique find and the wider landscape.

The sensational find is located at Viksletta right next to the monumental Jelle mound in Østfold County, Norway. The team has discovered the traces of at least eight so far unknown burial mounds destroyed by ploughing. But with the help of georadar, the remnants and enclosing ditches of these massive monuments can still be mapped in detail.

One of the former mounds clearly shows the remains of a Viking ship initially buried in the mound. There are clear indications that the ship’s keel and floor timbers are preserved in the grave. Based on other Viking ship finds the archaeologists worked out a first hypothetical reconstruction of the ship.

– We are certain that there is a ship there, but how much is preserved is hard to say before further investigation”, says Morten Hanisch, county conservator in Østfold.

– This find is incredibly exciting as we only know three well-preserved Viking ship finds in Norway excavated long time ago. This new ship will certainly be of great historical significance as it can be investigated with all modern means of archaeology”, says Dr. Knut Paasche, Head of the Department of Digital Archaeology at NIKU, and an expert on Viking ships.

Beside the monumental burial mounds, the georadar data revealed 5 longhouses – some of them remarkably large – a situation comparable to the site Borre in Vestfold County, on the opposite side of the Oslofjord.

– The ship burial does not exist in isolation, but forms part of a cemetery which is clearly designed to display power and influence”, says archaeologist Lars Gustavsen, project leader from NIKU.

The archaeologists from NIKU are now proposing a research project to further investigate the Jellestad ship, the site and the surrounding landscape with non-invasive methods before any excavations. It is planned to use additional non-invasive geophysical methods which will provide more insight into the ground and provide additional facts on the ship without having to dig it up and expose it to the elements.

Nevertheless, the professionals do not rule out that it may be necessary to make an excavation in the long term.