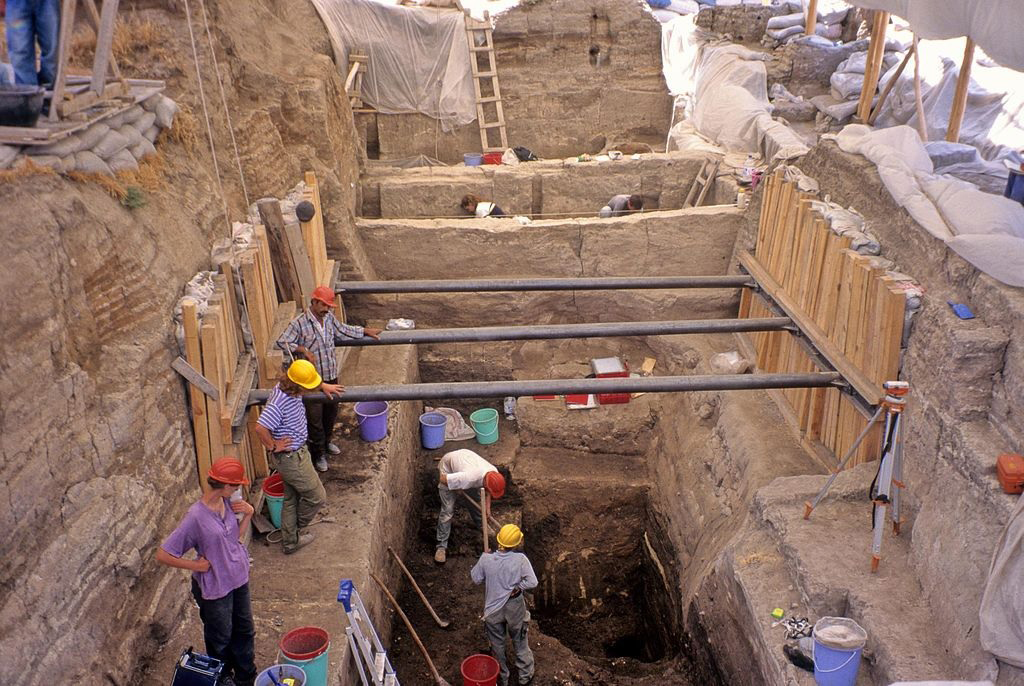 By the use cutting-edge protein and lipid analysis

Analysis of food proteins preserved in 8,000 year-old bowls and jars has revealed early cheese making at the prehistoric site of Çatalhöyük in Turkey.

The examination of residues found on the pottery has shown that dairying has been ongoing in the area – a key site for early farming – since at least the 6th millennium BC, with early people using milk from multiple different species including cow, sheep and goat.

By identifying whey and curd proteins in different vessels, the research team, from the University of York, the Max Planck Institute for the Science of Human History and the Freie Universität Berlin, were able to gain insight into the methods behind prehistoric cheese production.

The exceptionally well-preserved calcified deposits on the insides of the ceramics allowed the researchers to use cutting-edge protein and lipid analysis to gain a new detailed picture of the diets of the early farmers who populated Çatalhöyük – a prehistoric settlement inhabited from about 7100 BC to 5600 BC.

The broken fragments of pottery were unearthed in the West Mound excavation area of Çatalhöyük, dating to a narrow timeframe of 5900-5800 BC, towards the end of the site’s occupation.

The team of researchers also determined that some of the pottery was used to hold cereals, pulses and meat in addition to dairy products.

The study has revealed the foods eaten by early farmers at the settlement in unprecedented resolution and detail, narrowing some food items down to specific species.

For the first time, researchers were able to identify which animals were being used for their milk. They also found that barley and wheat were among the cereals being consumed and pulses included peas and vetches.

It is common practice among archaeologists, as part of the preservation and cleaning process, to remove and discard residues on artefacts. The study highlights how valuable these deposits can be, and the research team are calling for them to be retained as standard practice during post-excavation processing and cleaning of artefacts.

Professor Oliver Craig from the Department of Archaeology at the University of York, said: “By combing different analytical techniques, it feels as though we have really made a breakthrough towards revealing the true variety of foods processed in prehistoric pottery.  ‘Shotgun’ proteomics reveals proteins derived from different species and tissues while  lipid analysis allows us to crudely quantify the contribution of different foods present.”

However, the researchers emphasise that based on the archaeological record an even greater variety of foods, especially plant foods, were likely eaten at Çatalhöyük, which either were not contained in the vessels they studied or are not present in the databases they use to identify proteins.

Lead author of the study, Dr Jessica Hendy from the Max Planck Institute for the Science of Human History, said: “We used ‘shotgun’ proteomic approaches for the protein analysis which are heavily dependent on reference sequence databases, and many plant species are not represented or have limited representation. For example, there are only six protein sequences for vetch in the databases, but for wheat, there are almost 145,000.

“An important aspect of future work will need to be expanding these databases with more reference sequences.”