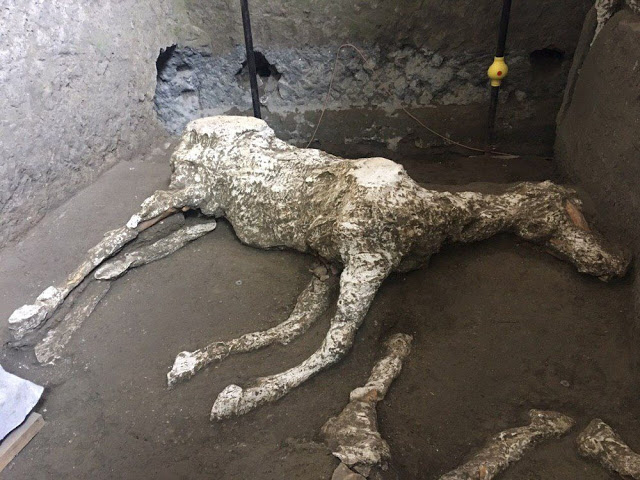 A third thoroughbred with an elaborate military harness has been discovered in the stable of Civita Giuliana, as part of the recent excavation campaign. Last March, in the northern zone outside the walls of the archaeological site of Pompeii, a joint operation of the Archaeological Park with the Public Prosecutor’s Office of Torre Annunziata, the Carabinieri Group Command of Torre Annunziata and the Naples Command for the Protection of Cultural Heritage led to an important excavation intervention in order to halt the illicit activity of grave robbers, which was damaging the archaeological heritage of the area.

The intervention revealed a series of rooms from a large, exceptionally well-preserved suburban villa, along with varied finds (amphorae, kitchen utensils and part of a wooden bed, a cast of which has been made). One of the rooms was identified as a stable of the estate, where it was possible to create a cast of a thoroughbred.

In the initial phase of excavation, a wooden trough (a cast of which was made), the complete outline of a horse and the legs of a second animal were identified. The current excavation operations, which began in July, have fully unearthed this room and have identified the remaining part of the second horse and a third equid, along with the remains of an elaborate military harness.

One of the two is laying on its right side, with the skull resting on the front left leg. Presumably tied to the trough, it was unable to struggle and free itself.

The other lies sprawled on its left side, and the iron bite is preserved under the jaw. The digging of the tunnels by the grave-robbers, along with the cementing up of the cavities, made it impossible to create a cast of the third horse.

During the excavation of the body, five bronze finds also came to light. Four heavily reworked conifer-wood finds, coated in bronze lamina and half-moon shaped, were found on the ribs of the rib cage; a fifth object formed of three hooks with rivets connected by a ring to a disc, also in bronze, was recovered from under the belly, near the hind limbs.

The shape of these elements, and comparisons found in literature, suggest that they belong to a particular type off our horned saddle, which consisted of a wooden structure with four horns, two front and two rear, covered with bronze plates which gave stability to the rider, in an era prior to the invention of stirrups.

Saddles of this type had been used in the Roman world since the 1st century AD, particularly in military contexts. There were four ring joints for every harness, and they were used to connect various leather straps and lock the saddle in place on the horse’s back. Such harnesses were certainly used for military parades.

Other elements which formed part of the ‘ornamentation’ of the horse can be identified behind the back, where traces of plant fibres suggest the presence of a cloth/mantle. A further cast in the space between the front and hind legs suggests that there was a bag. It is likely that some of the missing harnesses were stolen by the grave robbers.

“The three horses, perhaps like the first which was discovered and analysed, must have belonged to the ‘noblest breed’ of display animals, as indicated by their imposing size – likely the result of selective breeding – and the quality of their iron and bronze harnesses”, declares Director General Massimo Osanna.

These exceptional discoveries confirm that this was a prestigious estate, with richly frescoed and furnished rooms, and sumptuous sloping terraces facing onto the Gulf of Naples and Capri, as well as an efficient servant’s quarter, with a farmyard, oil and wine warehouses and densely cultivated lands, even according to the first investigations of the early twentieth century. In 2019, two million euros from the ordinary finds of the Archaeological Park will be allocated for the expropriation of land and continuation of excavations, with a view to an eventual opening to the public.”