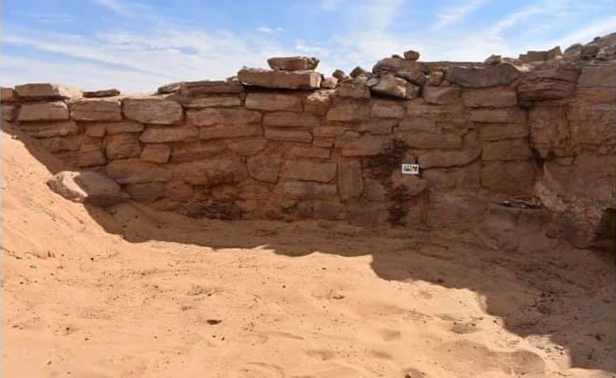 The British Archaeological Mission of the University of Birmingham
and the Egypt Exploration Society, working on the Qubbet el-Hawa project
in Aswan succeeded in uncovering six tombs of different sizes dating back to the Old Kingdom.

Dr. Mostafa Waziri, Secretary-General of the Supreme Council of  Antiquities, said that the discovered tombs’ dimensions range from 190×285 cm to 352×635 cm. Two of them have an entrance carved into the rock, one a complete entrance, which is closed with stones, and an entrance to its burial chamber, carefully enclosed by a brick wall. However, it was looted in ancient times by thieves who broke the back wall to it.

Prof. Martin Bommas, project director and director of the Museum of Ancient Cultures at Macquarie University in Sydney, Australia, said that
a fragment of a funerary mask and a small metal amulet showing  god Khnum, were also found inside a tomb.

Also found were a large quantity of pottery, which dates back to the late era. Abdul Moneim Said, Director General of the Aswan Antiquities, said that all the finds discovered were transferred to the storehouse in Aswan.