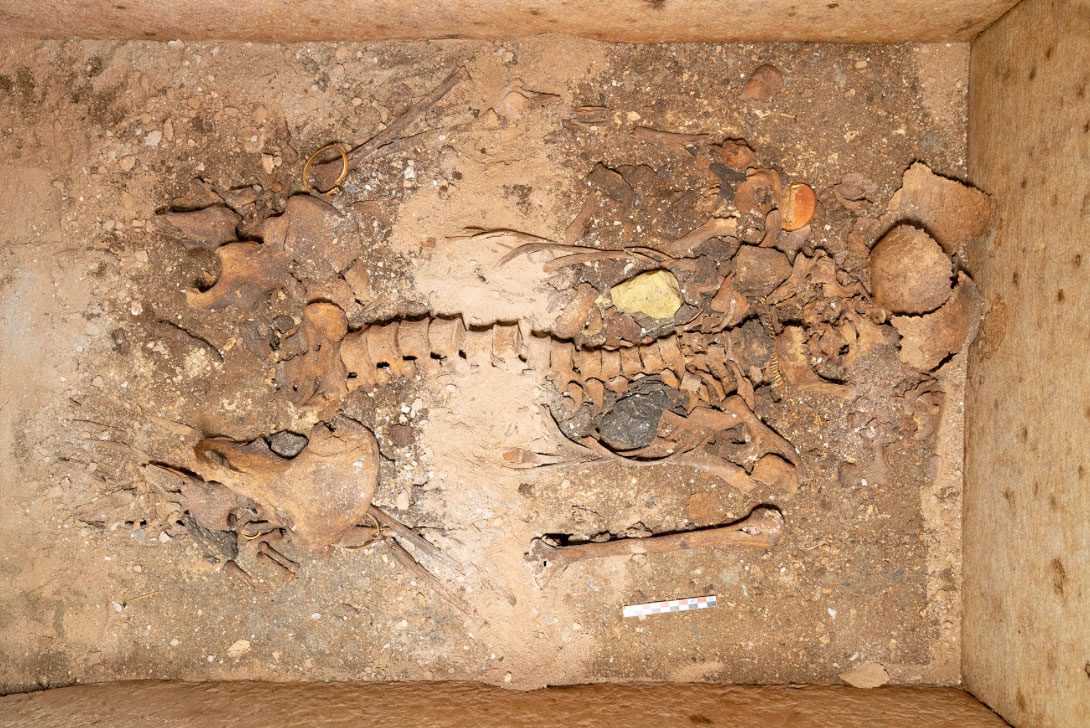 At an event by the Ministry of Culture and Sports

Great archaeological finds and significant aspects of modern culture “met up” on Sunday January 27 at the National Theatre (Ziller Building) where the Ministry of Culture and Sports, in an event open to the public, presented key moments of 2018. Among the exceptional archaeological finds was the clay tablet with Homeric verses from Olympia and the burial of the prominent woman at Episkopi on Sikinos about which new important data was supplied.

The clay tablet with Homeric verses from Olympia

The clay tablet with Homeric verse from Olympia was presented by the head of the Ephorate of Antiquities of Ilia, Erofili-Iris Kolia. The discovery was made while conducting a surface geoarchaeological survey round the sanctuary of Olympia, headed by the Ephorate of Antiquities of Ilia in collaboration with the German Archaeological Institute and the Universities of Darmstadt, Tübingen and Frankfurt am Mainz. The clay tablet with an etched inscription preserving the first 13 lines from Book 14 of the Odyssey may date from the Roman era (2nd-3rd c. AD). The inscription is the earliest surviving fragment of these particular verses. Furthermore it is the first time that an extract from the Odyssey is found on a clay tablet.

According to Mrs Kolia, the inscription was etched while the clay was still damp on the tablet which was then used the second time round as a building material. In fact, as noted, the place it came from has probably been found: Namely, a burial monument from a quite extensive cemetery dating mainly from the Roman era and based on the finds (mainly inscriptions), believed to be the cemetery both of officials of the Olympia sanctuary and of athletes. The cemetery is situated at the site of Frangonisi (where the inscription was located) and had been excavated by the archaeological service in the 1960s. The burial monument from which the tablet probably originated, was located during surveys by the Ephorate of Antiquities of Olympia in the summer of 2018 which followed the discovery and identification of the inscription. Other finds were also located, such as the footprint of a 5 or 6-year-old child. As for the first use of the clay tablet with the Homeric verses, that is a riddle that remains to be solved.

The “possessed” woman of Sikinos

One of the most impressive discoveries from last year was the location of the tomb of the prominent woman at Episkopi on Sikinos (an ancient mausoleum and church in one) during work on the monument’s restoration by the Cyclades Ephorate of Antiquities. The woman’s name was Neiko, as revealed by a burial epigramme in a rhyming elegiac couplet found in the impressive ancient mausoleum built during a transitional phase of cultural reforming sometime before or after 200 A.D. The monument was later transformed into a Byzantine church with a dome and arch, retaining this form until now, through repeated modifications and repairs. As had been announced by the Ministry of Culture in July 2018 ‟the cist grave had been placed in a blind spot of the monument’s basement to avoid being looted”. Things however may have been somewhat different.

‟While the dead woman’s memory is brought to life in the monumental mausoleum to be preserved for all time, at the same moment her burial literally vanishes. It is not placed in the mausoleum’s underground crypts but is hermetically sealed, essentially walled up, so as never to be traced. This disappearance was not a precautionary measure against tomb raiders but rather linked to findings that reveal a ritualistic burial of the dead Neiko” says Head of the Cyclades Ephorate of Antiquities Dimitris Athanasoulis in his talk ‟The secrets of Episkopi, Sikinos”, revealing the following new, shocking fact:

‟The particular state of the skeleton’s preservation which is being investigated at present, a piece of sulfur and a mass of mineral tar (θεῖον and ἄσφαλτον in the ancient texts) which had been placed on her breasts make it apparent that we are faced with a case of necrophobic exorcism. Was it perhaps a superstitious fear of the unfortunate woman’s condition that led to her remains being hermetically walled up? It was certainly love that led those closest to her to praise her in the epigramme and transfer her memory, from her hidden body, to the beautiful Sikinos mausoleum”, Dimitris Athanasoulis added. The find raises many questions—such as what did the woman suffer from that was seen at that time as her being possessed—which can only be solved through research.

Other archaeological finds which also caused a stir in 2018 and were presented at the event were the following: The discovery of the city of Ancient Tenea, new data from the Minoan palatial centre of Zominthos, the ancient and medieval shipwrecks in the Fourni Archipelago, the Atalanti kouroi, the five year interdisciplinary project at Gla ‟Waking the Minyes″, the Cupids of Amvrakia (the cupids are the main subject matter of a pebble floor discovered in August 2018 in Arta, at the site of the Small Theatre of Amvrakia) and the unplundered Late Minoan ΙΙΙΑ-Β tomb at the site of Kentri in the Ierapetra Municipality.