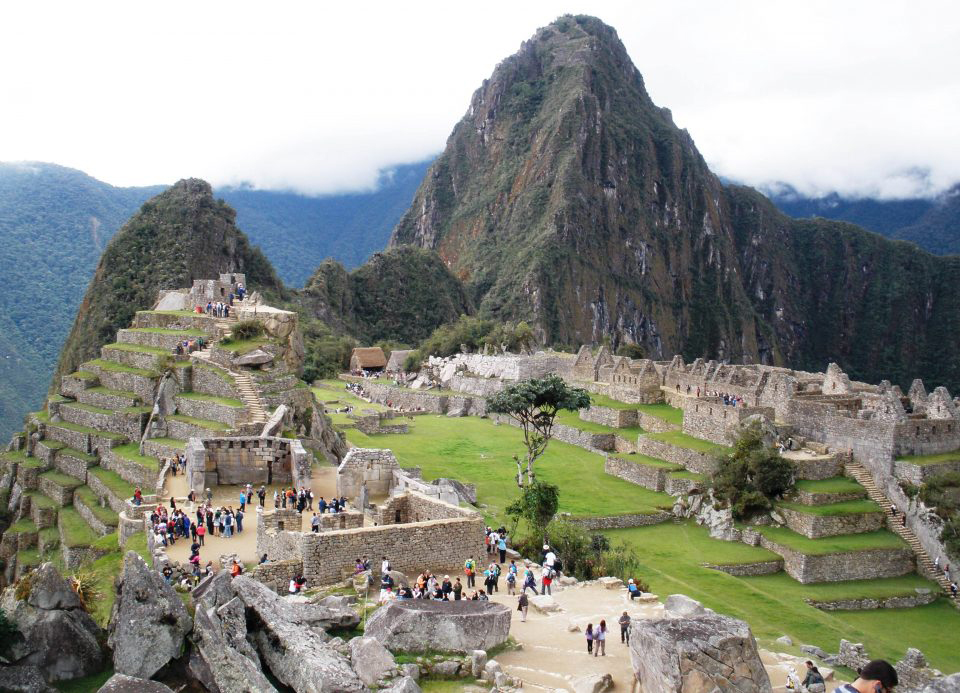 A study by the UPV/EHU-University of the Basque Country has evaluated the role of micro-organisms colonizing the Sacred Rock at Machu Picchu in its state of conservation.

The UPV/EHU’s IBeA research group has used a non-destructive methodology to determine the role of specific algae, lichens, mosses, cyanobacteria, etc. that may be causing exfoliation and delamination, which are degrading the Sacred Rock of Machu Picchu, one of the most important symbols in the Peruvian archaeological city.

The Sacred Rock is one of the most important monuments at the Inca sanctuary Machu Picchu, located in the Cusco region in Peru. It is a granitic rock that the Inca culture used for religious worship as it was regarded as the gateway between earth and heaven. Owing to the location and climate conditions of the site, many rocks in the archaeological city are affected by biocolonization.

And at the Sacred Rock in particular “it is possible to see various exfoliation processes; in other words, there are small losses of material that are causing small areas of the rock to flake,” explained the UPV/EHU PhD holder and lecturer Héctor Morillas. He is conducting various pieces of research work relating to Machu Picchu in collaboration with the IBeA research group of the Department of Analytical Chemistry and with the Department of Plant Biology and Ecology at the UPV/EHU’s Faculty of Science and Technology.

By applying a non-destructive, multi-analytical methodology, the researchers have determined the role played by the species of lichens, algae, mosses, cyanobacteria, etc. colonizing the Sacred Rock with respect to the conservation problems it is displaying. As Morillas explained, “once these species penetrate the material through some kind of minor deterioration that has been forming, they attach themselves to the material itself so that they can feed off the minerals belonging to the rock, gradually degrading it. As time passes, these micro-organisms can cause minor delamination that could result in the progressive loss of this rock”.

After determining the family to which each of the species of micro-organisms found in numerous micro samples of the rock belongs, as well as which biogenic pigments are excreted by each of them, “we carried out in-depth profiling to predict how far these micro-organisms may have penetrated”. That way, the researchers have concluded that “there is a wide variety of biocolonizer species in the Sacred Rock, most of which have penetrated through the porous substrate, and which could be one of the factors responsible for the stress being enduring by this rock”, said Doctor Morillas, who currently lectures in the UPV/EHU’s Department of Mathematics and Experimental Sciences Didactics.

This piece of research is just one of the studies being conducted by the UPV/EHU’s group of researchers at this location. In fact, the diagnosis of the conservation state of various buildings, such as temples, houses or meditation areas in the archaeological city, has also begun; at the same time, the building material used throughout Machu Picchu has been analysed and “we are also studying possible alterations in the granitic material owing to possible incorrect restoration carried out in the past in certain places at Machu Picchu”. The researcher has also conducted “an ecotoxicity study of the city itself and all the surrounding area of the Archaeological Park where we have analysed the soil, air and rainwater for potential contaminants”.

What is more, Morillas has analysed rock paintings located in the park and has been able to specify the materials used to produce them; “these paintings are believed to date back much earlier than the pre-Hispanic era”. Finally, the researcher added that “thanks to all this we are drawing up the bases of a project with various universities and institutions in other countries to study the conservation of emblematic UNESCO locations”.