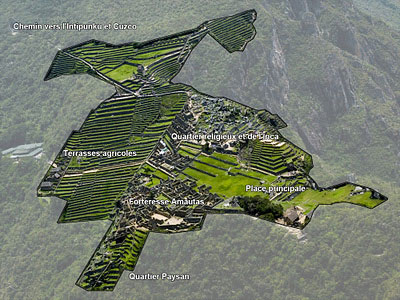 Is Machu Picchu a giant geoglyph of a bird?

Architect comes up with new theory

Twenty years ago, architect Enrique Guzman bought a small-scale model of Machu Picchu at the National Museum. What he saw in the model would one day become the basis of his master’s thesis at the National Engineering University. “The citadel was shaped like a bird,” he said.

During his research he has reviewed documents, read history books, memorized plans and analyzed urban usage.

“I’ve seen that everyone analyzes Machu Picchu from an archaeological or historical point of view, but I wanted to take a look from architecture’s view point.”

Guzman said he found the original perimeter of the citadel was shaped like a bird that seemed to be flying towards Uña Huayna Picchu.

“The arrangement of structures, streets and squares globally views are directed towards this hill,” he told El Comercio.

He said his findings were based on studying the urban use and orientation of the city.

Guzman also argues that Machu Picchu doesn’t mean ‘Old Mountain,’ but instead the word ‘picchu’ comes from the word ‘pichiu’ that in Quechua means ‘bird’.

However the theory does not convince Fernando Guzman Astete, head of the Archaeological Park of Machu Picchu.

“The traditional orientation of Andean cities is from east to west. Sunrise determines the orientation of the building, and the Uña Huayna Picchu is located to the north. What we think is that the city was built to watch the sunrise to the east; that happens with the Intihuatana and the Temple of Three Windows,” Astete said.

Astete also said that there have been several interpretations of the shape of the city, but “more research is needed.”

A similar point of view was expressed by historian José Tamayo Herrera.

“For a long time researchers have wanted to give different shapes to the cities built by the Incas, but I think everything is just more imagination.”