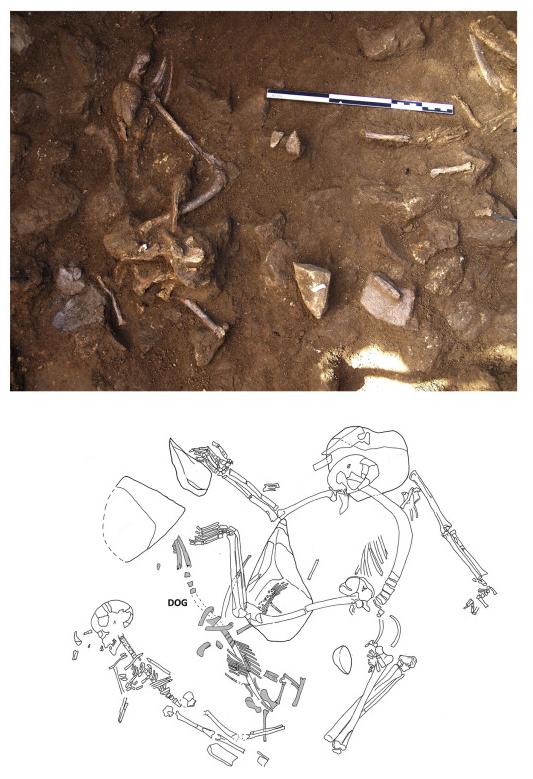 Coinciding with the Pit Grave culture (4200-3600 years before our era), coming from Southern Europe, the Neolithic communities of the north-eastern Iberian Peninsula started a ceremonial activity related to the sacrifice and burial of dogs. The high amount of cases that are recorded in Catalonia suggests it was a general practice and it proves the tight relationship between humans and these animals, which, apart from being buried next to them, were fed a similar diet to humans’.

This is the conclusion of a research study led by Universitat Autònoma de Barcelona (UAB) and the University of Barcelona (UB), which provides new data to describe and understand the presence of dogs in sacred and funerary spaces of the middle Neolithic in the Iberian Peninsula, and gets an insight on the relation between humans and these animals. The study has been published in the Journal of Archaeological Science: Reports.

The study analyses the remains of twenty-six dogs found in funerary structures from four sites and necropolises of the Barcelona region, and has conducted an isotopic analysis for eighteen of them, to determine whether the relation with their owners included other aspects, such as a control of their diet.

Dogs were aged between one month and six years old, predominating hose between twelve and eighteen years old, and had homogeneous sizes, between forty and fifty centimetres high. These were mainly buried in circular graves, together or near the humans, although some have been found separately in nearby graves and one was found at the entrance of the mortuary chamber. The skeletons were semi-complete in anatomical connection -only one was found as full, near a kid- without bone fractures or marks due manipulation by evisceration, or any signs of predators.

“Choosing young animals aged up to one year old suggests there was an intention in the sacrifice. Although we can think it was for human consumption, the fact that these were buried near humans suggests there was an intention and a direct relation with death and the funerary ritual”, says Silvia Albizuri, researcher from the Prehistoric Studies and Research Seminar (SERP) of the UB and first author of the article. “This hypothesis is consistent, in addition, with the fact that they are found in an area of cultural influence that gives a symbolic value to the dog during that period, such as Southern France or Northern Italy”.

A diet rich in cereal and vegetables, controlled by humans

The isotopic study of the remains and its comparison with humans’ and other herbivorous animals’ diet in the site shows the diet of most of these animals was similar to the diet of humans, with a high presence of cereal, such as corn, and vegetables. In two puppies and two adult dogs, nutrition was mainly vegetarian and only a few cases had a diet rich in animal protein.

“These data show a close coexistence between dogs and humans, and probably, a specific preparation of their nutrition, which is clear in the cases of a diet based on vegetables. They would probably do so to obtain a better control of their tasks on security and to save the time they would have to spend looking for food. This management would explain the homogeneity of the size of the animals”, says Eulàlia Subirà, researcher in the Research Group on Biological Anthropology (GREAB) of UAB.

The presence of dogs in prehistoric disposal structures is not common, which makes it a little-studied group among domestic animals. Their presence in graves is even lower. This is why the presence of these skeletons in anatomical connection like the ones in this study is considered exceptional.

There have been older cases of individual isolated burials in the Iberian Peninsula, but only later documented as a general practice related to the funerary ritual. This ritual spread and lasted during a hundred years, until the Iron Age.

Regarding food, there are only a few studies, with some cases of mixed diets in France, Anatolia and China. “Recently, we saw dogs have ten genes with a key function for starch and fat digestion, which would make the carbohydrates assimilation more efficient than its ancestor’s, the wolf. Our study helps reaching the conclusion that during the Neolithic, several vegetables were introduced to their nutrition”, notes Eulàlia Subirà.

The study allows reinforcing the idea that dogs played an important role in the economy of Neolithic populations, taking care of herds and settlements. That may be the vital relation that turned them into a companion in death or symbols in funerary rituals, the researchers conclude.