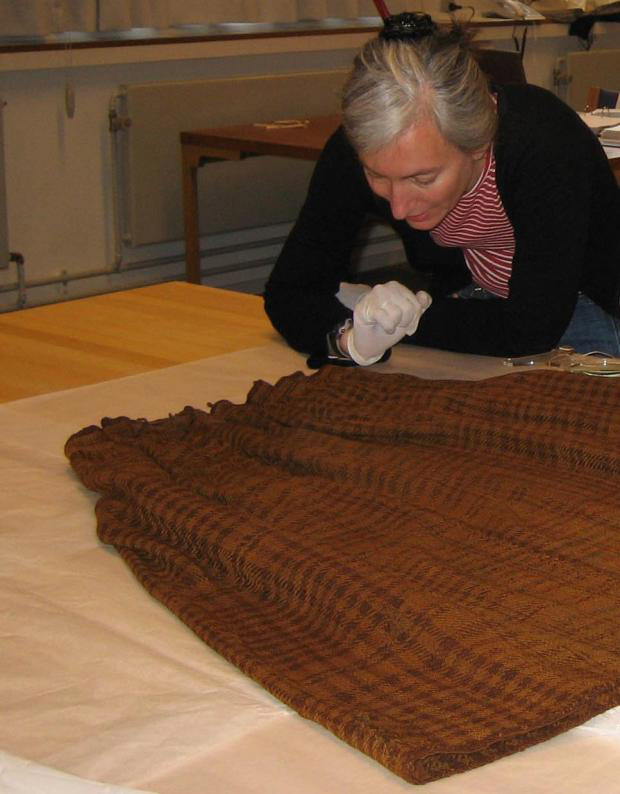 Textiles of the Danish Iron Age are no longer colourless.

Colourful patterned clothes appear in the early Iron Age according to new analyses of 180 textile samples from 26 different bog finds, carried out by Ulla Mannering, a senior researcher and archaeologist at the Danish National Research Foundation’s Centre for Textile Research at the National Museum.

The beginning of the Iron Age sparked a revolution in fashion in which clothes became coloured and patterned,” she says. Conventional theory held that access to colourful textiles only emerges in Scandanavia in the centuries after the 1st centuries AD. This discovery pushes back the date by at least 500 years.

The new analyses also shows that the bog bodies from which the textiles were taken are older than previously thought with most of them dating back more than 2,000 years.

The discovery also challenges the view that the bodies, which had been buried in an ancient sacrificial bog, where prisoners or poorer people, who for some reason had been destined to be sacrificed or punished.

The new findings represent a fresh start in the attempts to understand why the bodies ended up in the bog and the costumes play an important role in this work. “The textiles have not previously been taken into account when assessing the social status these people had,” she says.

One bog body that has been of particular interest to Mannering and her colleagues is the woman from Huldremose, whose body was found in a marsh in Jutland 19 May 1879. Her costume consisted of two sheepskin coats, a skirt and a scarf, woven from naturally coloured wool.

The woman from Huldremose has a wound on one arm, which has been regarded as a sign that she had been beaten and sacrificed to the gods. However, according to the project’s forensic scientists, the wound is more likely to have appeared after she ended up in the bog.

On closer examination, it becomes clear that she was richly attired, with a coat made from the skins of around 14 sheep, a long skirt and a scarf, with a petticoat made from nettle. However, not only was her costume of a high quality, it also had many colours, particularly red, which was not widely used at the time.

“We don’t know how she died, but her coloured costume suggests a high status,” says the archaeologist.

In the analysis work, which was conducted at a Belgian research institute, the scientists extracted the chemical components of the textile dyes, which enabled them to map the chemical composition of the colours.

The analyses revealed that in the early Iron Age, people were able to dye their clothes yellow, blue and red. The manufacture of garments with several different colours has required a mastery of many dyeing techniques that made use of various dyebaths.

They found no colours or patterns in Bronze Age costumes and so the early Iron Age must have witnessed some technological advance that led to the ability to produce garments and clothing designs in all sorts of colours.