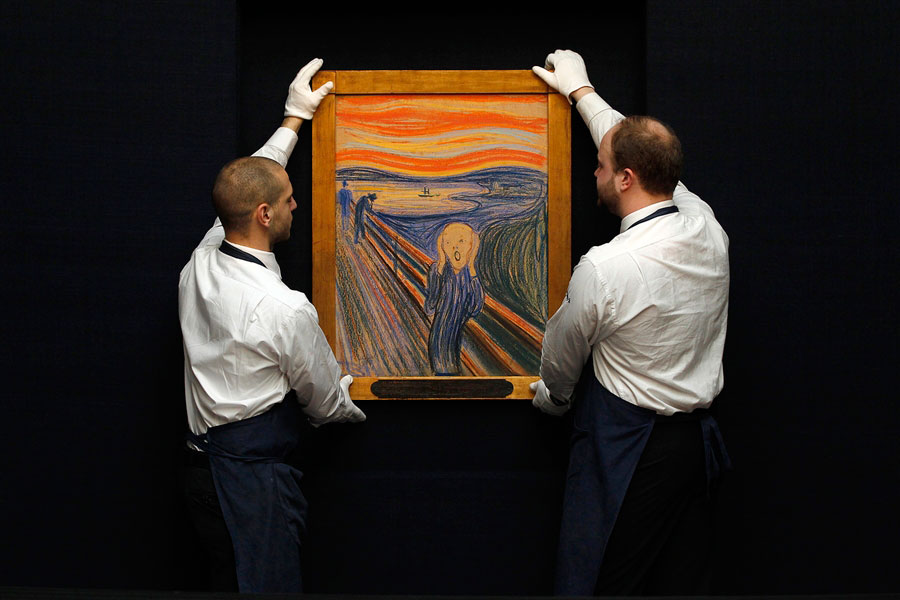 ‟The Scream” by Edvard Munch

‟The Scream” is the most iconic painting by Norwegian artist Edvard Munch in the History of Art, but the story associated with it and its adventures is equally strange and famous.

For a start, this famous painting is not just one but four; Munch had actually painted four versions of the same painting. Three are in Oslo and the fourth was auctioned in New York in 2012 for the record price of 120 million dollars. But the adventure of ‟The Scream” does not end here. The 1893 version has already been stolen twice and it is the 25th anniversary of the first theft on February 12.

At the time, in 1994, burglars had entered the Oslo National Gallery almost undisturbed simply by breaking a window of the building. According to the reconstruction of the theft by the authorities, the alarm system immediately went off, but the Gallery’s guard did not have time to alert the security services. The burglars needed just 50 seconds to enter and steal the painting by the Norwegian Expressionist.

Responsibility for the theft had been claimed by an organization opposed to abortion, which announced that the painting would be returned only if an anti abortion documentary called ‟The silent Scream” was aired on state television. The proposal of exchanging the painting for the transmission of the documentary was turned down and the work returned to the Oslo National Gallery thanks to action taken by two ‟undercover” police officers pretending to purchase the painting for £250.000.

The painting’s adventure did not end in 1994 however. It was stolen for a second time in the summer of 2004 by two armed robbers who forced their way into the Oslo National Gallery just as its doors were opening to the public. Apart from ‟The Scream”, the robbers also took another work by Munch, the ‟Madonna”.

Both works, valued at 92 million dollars, were located and returned to the National Gallery, having suffered only a few minor damages due to humidity and unsuitable storage conditions.