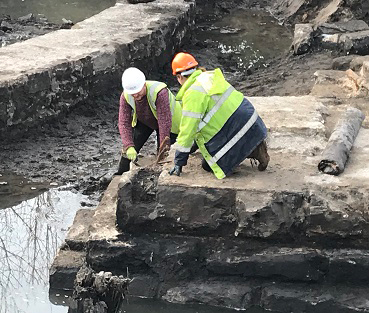 Defensive bastions seen for the first time since the mid-19th c.

Archaeological excavations of the Old West (Queen’s) Dock opposite ocean terminal are revealing part of the port’s Napoleonic defences.

The remains the Georgian and Victorian docks are being excavated by AOC Archaeology with the City of Edinburgh Council, and preserved in advance of the redevelopment of the former Henry Robb shipyard site by CALA Homes (East).  It’s the first time these defensive bastions have been seen since the mid-19th century.

The site, set to become Waterfront Plaza, has been identified as occurring within an area of archaeological and historic significance both in terms of Leith’s and Edinburgh’s maritime heritage, with the remains of the former docks and defences considered potentially to be of national significance.

The southern part of the development site partially overlies the site of the early 19th century Old West (Queen’s) Dock part of John Rennie’s 1801 designs for the port which would have linked Leith with nearby Newhaven. Construction started in 1809/10 and significantly incorporated two seaward facing defensive bastions, a measure in response to the ongoing Napoleonic Wars, the eastern of which was designed to corporate two dry docks. However, construction stopped at this location with the proposed western half of the scheme never being built.

The layout of the Georgian dock and defences can still be clearly seen in the 1849 1st Edition OS map. By the 1870’s these sea defences had been lost under what became Henry Robb’s Shipyard, though the two dry docks remained in use until the Wets Dock was abandoned in the late 20thcentury.

Although lost from public view since, the results of excavations by AOC Archaeology – brought in by CALA to provide expert on-site consultation – are shedding new light upon the construction of these important sea defences and the development of the dry-docks.

Cllr Donald Wilson, Convener of Culture and Communities said: “I continue to be surprised and fascinated by the uncoverings and discoveries made by archaeologists in Edinburgh. Unearthed in what is still to this day a busy port it’s very interesting to compare original designs with what was actually built and where since there has been much modification and development since. Still in good condition, it is important that we continue to work with Cala and AOC to enable the protection of the remains under the new development.”

Tom Mitchell, Technical Director with CALA Homes (East), said: “We knew from early table-top research that – like vast parts of the surrounding area – we were set to find the remains of important historic docks.

“What we have unearthed in the last few months is really fascinating – and it provides a rare glimpse into our seafaring past.

“Working hand in hand with archaeology experts at AOC and the council, we’ve been able to subtly adapt plans to ensure we protect as much of the remains as possible. That way, should future generations ever wish to dig and find out more – they’ll still be able to do so.”