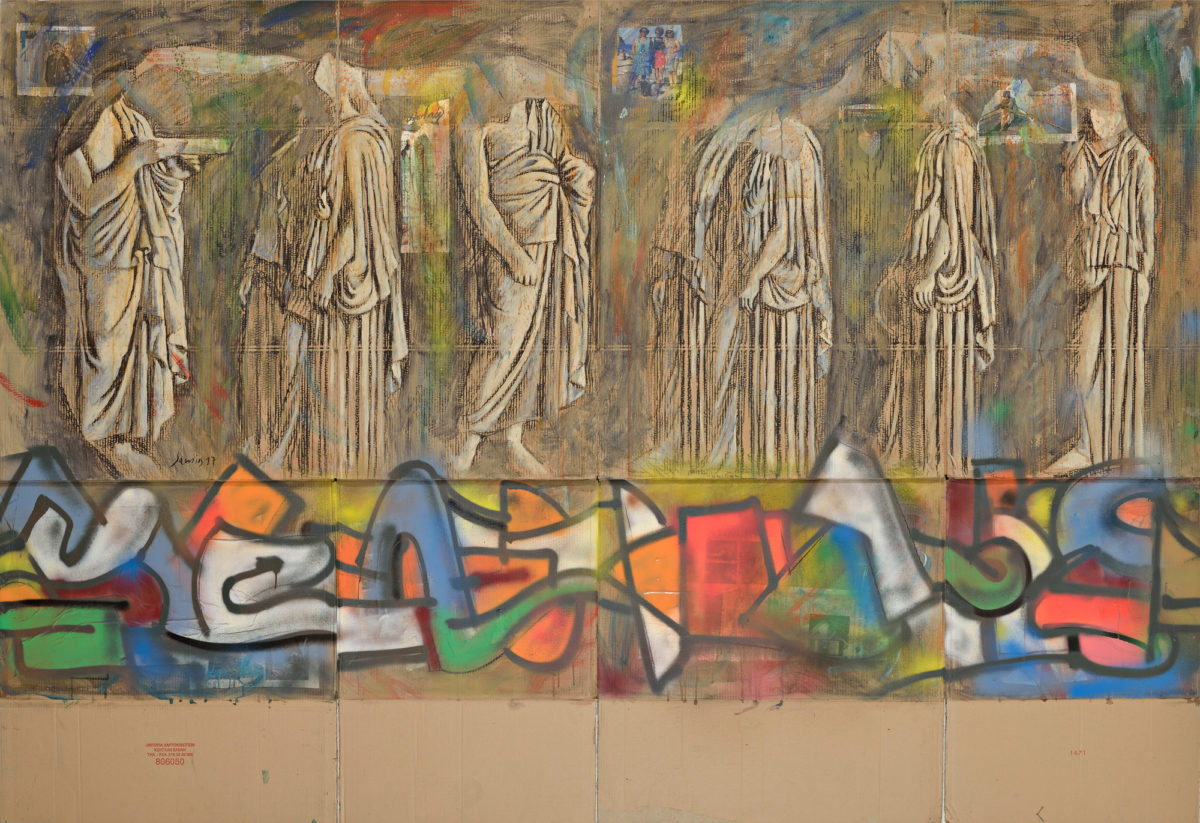 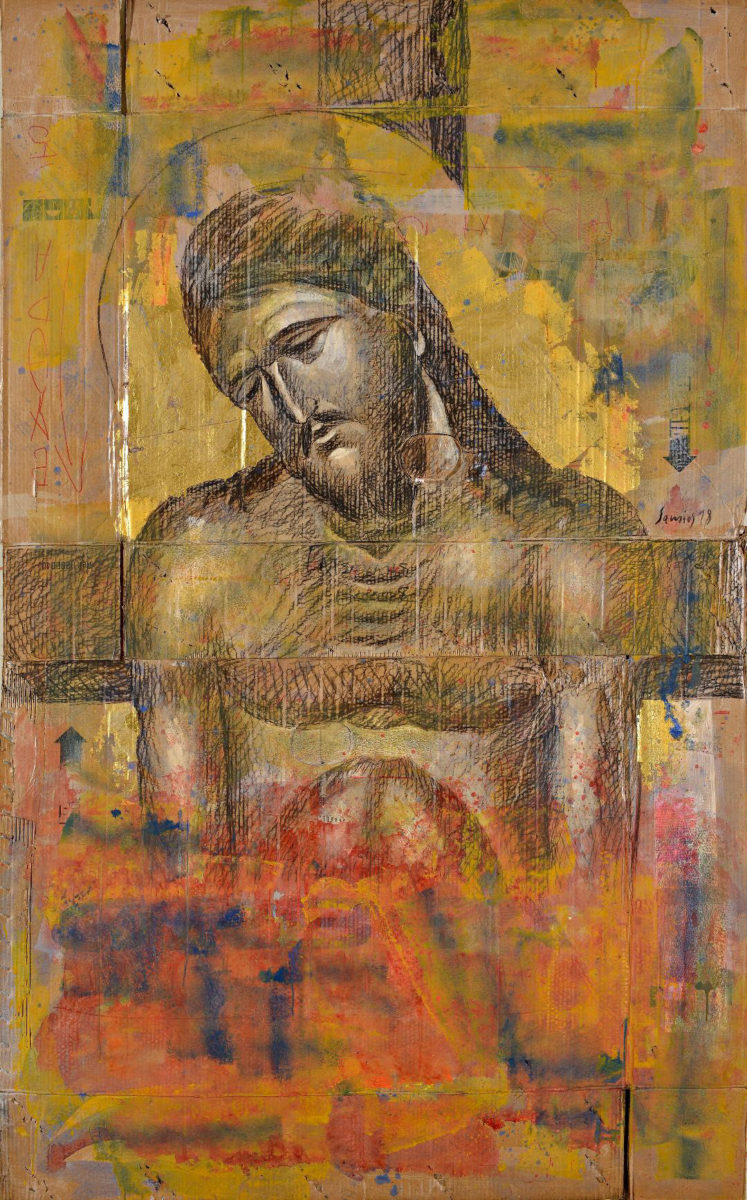 The painter talked to the Athens and Macedonian News Agency

What can be narrated by a “broken″ history? The way “to reconnect to our broken pieces, to join them together so as to move on″ says the painter Pavlos Samios to the Athens and Macedonian News Agency (AMNA), on the occasion of his exhibition that opened last week at the Byzantine and Christian Museum. “To show our stature; to take our place among the others, not so as to state we are better. I am not interested in being better, but in being different″.

In the exhibition “Broken History″, 66 large works (some over 3 metres) are on display, most of which he has painted on boxes he has collected off the streets. A few of his works are made of marble fragments and even fewer from parts of cars. His subject matter in most cases centres on antiquity, i.e. statues, painted in a fragmented manner on one or more cardboard boxes, where contemporary Greek reality is depicted with multi coloured abstract graffiti, stickers or other cheap materials such as aluminum cans. He has painted the smiles of “archaic korai″ on pieces of Pentelic marble—the same marble as that of the Parthenon sculptures- and reflections of antiquities on car wheels and mudguards.

” Anything ancient is so much part of our psyche that the moment we think about it we see it everywhere″, he says to the AMNA, referring for example to a pair of mudguards from a Smart car on which he had painted antiquities, or a small part of a car he found after a car crash on which he depicts Homer. “I did not intend to make a sculpture, I just wanted the idea, as in the case of stones. I’d had an exhibition on Limnos and the works were returned in a box″ he continues. “As I was removing them and about to throw the box away, I started painting it. That’s how the first work emerged″. Why does he insist on cardboard? “I kept seeing all those people crossing the sea and drowning, coming to Samos and using pieces of cardboard to sleep on. Cardboard is now an issue, it’s a material. People are living inside it. It is significant. I made works on canvas. It did not feel like ‘making something holy on a piece of garbage’″.

The exhibition begins with the culture of Byzantium. On the ground floor of the two storey Villa Ilissia, visitors encounter works depicting Jesus Christ painted in one piece on opened cardboard boxes, reminding one of his “sacrifice″ and the time of year we are currently going through, up to Easter. “Here is Byzantium. Jesus Christ, Christ’s Humiliation, The Descent from the Cross , The Lamentation on the Tomb and a Saint George for our protection. I did not choose the big events of Christ’s life but scenes after his death and before his Resurrection, when he was still human. I wanted to give greater significance to the sacrifice of a man for the sake of us becoming better. In these works nothing is ‘broken’, just slightly worse for wear because they are on cardboard. The feeling is more that we have also caused trouble to our religion and faith” says the painter to the AMNA about the works on show on the ground floor. Among them are some of his earlier works from the time he taught at the School of Fine Arts and which he believes are suited to the spirit of the Museum.

On the first floor, antiquity takes over, with the works in interconnected sections, conversing with each other. “On the one hand is destruction and on the other rebirth″ says Pavlos Samios explaining that “the idea is that Greece is going through a period of great decline at the moment. We all know this, but I would rather comment on this culturally rather than politically. I am interested in the result and not who is to blame. So it is an exhibition of protest, a small ‘Guernica’ that shouts ‘we have killed them, we have smashed them, we must reorganize, we must find ourselves again, to become Greeks once more’. That is, we should attach importance to what we have: Our antiquities, museums, theatres, writers, poets. We should find young people who are working on these matters, whatever one is doing in contemporary work″ he stresses.

Most of the antiquities (statues and sculptures) depicted in the works of Pavlos Samios are abroad today, in the British Museum, among others and the Louvre. “The crisis is not only here, it is there as well. It is a bit more serious here because the economy is so bad. But the matter is not financial it is mentality issue” says the painter. “At this moment we need to unite, not politically but as human beings. We must save Greece and help the country move forward. I sense we have lively, talented kids and young people but they need help”. This is the reason for the rebirth section where the fragmented pieces are in a process of reconnecting until they find themselves again. “I could not just be pessimistic because I am an optimist by nature. We must ‘delve’ into our souls and rediscover our broken pieces, join them together and move on”.

All the works, apart from those from the artist’s time at the School of Fine Arts, were made exclusively for the Byzantine and Christian Museum. “As I was also a professor at the SFA and taught Byzantine art, I have a soft spot for this museum. What I mean is that I am attached to Byzantium despite most of the works being ancient. This is because through the techniques of Byzantium I learned how the ancient Greeks painted, what their materials were etc. So to mount an exhibition in my life time at the Byzantine and Christian Museum was wonderful for me”, Pavlos Samios concludes in his talk to the Athens and Macedonian News Agency.

The exhibition, which runs till June 15, is curated by Maria Xanthakou.