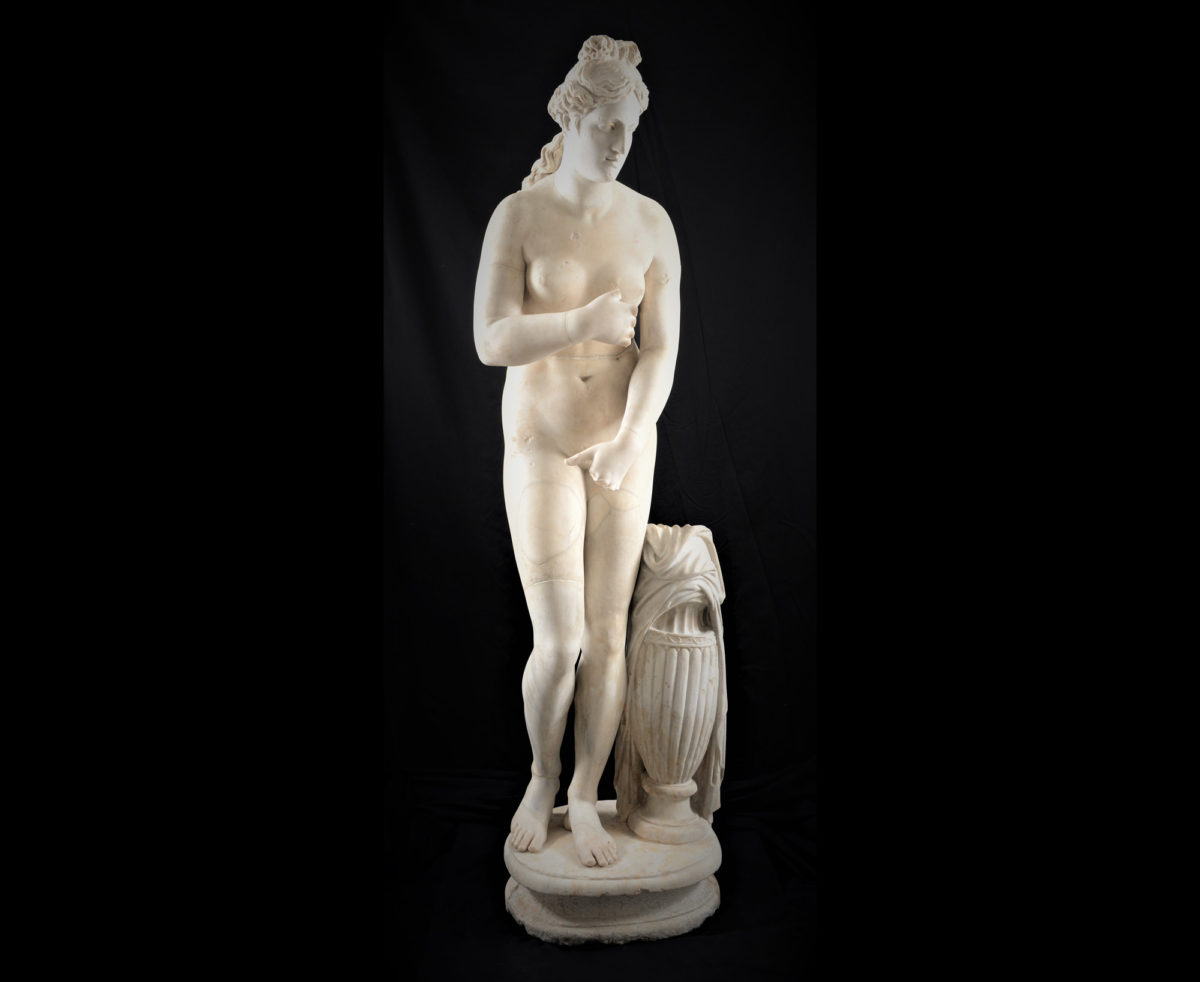 A statue that “dreamed″ of becoming the Aphrodite of Knidos

At the National Archaeological Museum

A statue that “dreamed” of becoming the Aphrodite of Knidos, the famous work by Praxiteles depicting the goddess in the nude, is on show for the first time in the National Archaeological Museum’s temporary exhibition “The Countless Aspects of Beauty”. With it were presented two more perfumes from antiquity created by the Korres Company especially for the occasion: Blue Sage and Coriander.

Head of the National Archaeological Museum, Dr Maria Lagogianni, explained the reasons this particular work from the Iolas collection is so special. It was brought up from the museum storerooms two years ago to be conserved and to reveal many of its ancient and modern secrets.

“Aphrodite is made up of fragments of different original works from antiquity that have been joined together. Specifically, the torso and head are from statues of the Roman era, while later additions were made from various types of marble for a style of statue to emerge that would appear important in the eyes of the collector of that era. Why was it important? It ‘dreamed’ of becoming antiquity’s most important sculpture of a nude woman: the Knidian Aphrodite by Praxiteles”.

Dr Lagogianni explained that the statue on show in the highly successful exhibition of the National Archaeological Museum (which since May 2018 has been visited by more than 430,000 people) is the distant offspring of Praxiteles’ statue. That is, it echoes a transformation of the original made 50 years later by Praxiteles’ son, Kifisodotos the Younger, which led to another type of statue: The Aphrodite of the Capitol.

It is interesting that the additions of marble and the joining together of the ancient pieces happened at a later time. “Maybe in the 18th, the 19th, even in the 20th century”, said the museum’s head, who interpreted the statue’s story just like an archaeologist: “A Roman craftsman of statue copies is impressed by a work from Hellenistic or Classical times and as required for the commerce of ancient art works in Roman times, he produces a series of sculptures simulating a specific popular type of sculpture. In our time, archaeologists are asked to ‘confront’ the Roman artist, understand which original piece he is copying, from when does it date and how many of its types and variations are around, for the work’s identity to be understood. This is one of the most difficult and demanding jobs of classical archaeology” noted Dr Lagogianni.

In the case of Aphrodite from the Iolas collection (added to the Museum’s collections in 1988) things were even more demanding, as the artwork is made up of fragments belonging to different periods and different statue types. “Now what is very interesting is the following: How much they wish to depict beauty and restore it by using fragmented forms of sculpture, joining them together and making reconstructions by adding marble or other pieces. This phenomenon is observed particularly in the Renaissance, where classical antiquity becomes fashionable and the great princes and art collectors cannot bear a headless body or a torso without arms. This is why they commission great sculptors to complete these statues so as to give them a form that is satisfactory in their eyes and conforms to their idea of beauty. This was also part of the exhibition’s rationale, i.e. beauty seen differently”, she said.

Modern methods were used during the work’s conservation that took place in the workshops of the National Archaeological Museum by conservators Pepi Tsakri and Yannis Panagakos. Specialized methods of photography made it possible among other things, to inspect colours that might survive on the surface of the marble, a digital microscope was used to observe the shapes and size of the crystals of each marble and the cleaning process was controlled by ultra violet lighting. In collaboration with a private firm, gamma radiography was also used to inspect the internal structure of the marble statue.

“We achieved unexpected results. We saw the internal structure in great detail in the same way you can see your bones when having an x-ray. This examination was a pre requisite for the statue to be moved from the workshop to the exhibition hall, since we had no facts about the work’s construction and we did not know what to expect”, said Mrs Tsakri to the journalists, pointing out that research on the statue continues. A video screened at the entrance of the temporary exhibition shows the statue’s internal structure invisible to the naked eye.

It is reminded that the temporary exhibition “The Countless Aspects of Beauty” at the National Archaeological Museum runs till the end of 2019.