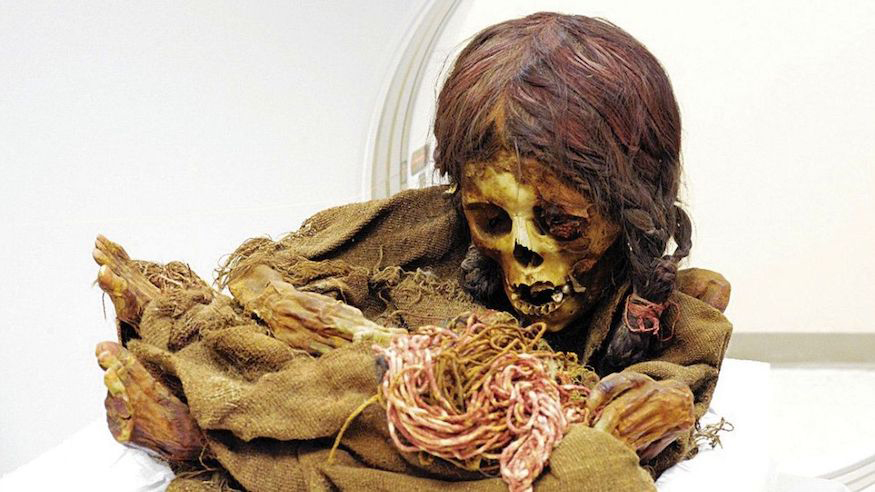 The mummy is the remains of a young girl, nicknamed Ñusta, meaning “princess” in the Quechua language. It was donated to Michigan State University in 1890 by the U.S. Consul to Chile. Through the 1970s, Ñusta had been on prominent display at the MSU Museum until Lovis and other curators recommended that she be removed from exhibition and curated away from public view.

Ñusta and her burial offerings had originally been placed in a stone tomb called a chullpa near LaPaz, Bolivia. She is presumed to be a capacocha, a ritual child sacrifice, buried among the peaks of the sacred Andes mountains. Most scholars agree that capacocha were meant to appease the gods of the mountains and assure protection and abundant rain for crops to support the Inca people. Though there is contention as to whether chullpa burials are those of sacrificial victims or elites interred in prominent monuments, capacocha were often the children of nobility chosen, because of their purity and innocence, as honored tribute. These children are believed to have traveled across considerable distances and altitudinal changes during their final months of life on the journey to the locations of their sacrifice.

Capacocha children are found with elaborate burial goods including silver and gold figurines, feathers, textiles and jewelry among other high-status artifacts. The means of the sacrifice seems to vary among the capacocha found, but often they would slip into slumber from chewing on coca leaves. This ritual was considered a necessary and important part of the Inca worldview.

In 2016, William Lovis, professor and curator emeritus at MSU, began the process of repatriation, and initiated coordination of collaborative interdisciplinary and interinstitutional documentation of the mummy using minimally invasive and cutting-edge technologies.

Gabriel Wrobel, MSU, is using non-invasive methods to interpret her age-at-death and documenting any existing trauma. Amy Commendador, Manager of the Earl H. Swanson Archaeological Repository at the Idaho Museum of Natural History at Idaho State University, has been using isotopic analyses from hair to reconstruct the diet and migration of Ñusta during her final months of life.

Anthropologists Samantha Blatt, ISU, and Amy Michael, UNH, are analyzing the microscopic structures in the enamel and root of a tooth to reconstruct her health. Dental histology, the study of microscopic tissues, will reveal if Ñusta experienced any acute health stress events in the earliest years of her life.

Along with Blatt and Michael, John Dudgeon, from the ISU Department of Anthropology and Center for Archaeology, Materials and Applied Spectroscopy (CAMAS), will capture the chemical markers of stress mapped within microscopic stress lines in the tooth.

The dental data, coupled with the hair data, will allow for a better rendering of the overall health experience and diet leading up to the sacrifice event. This will help to reconstruct the sociopolitical identity and geographic origins of Ñusta. It is hoped that this collaborative study of the mummy will give researchers a clearer view of the experiences of capacocha and their role in the Inca world.