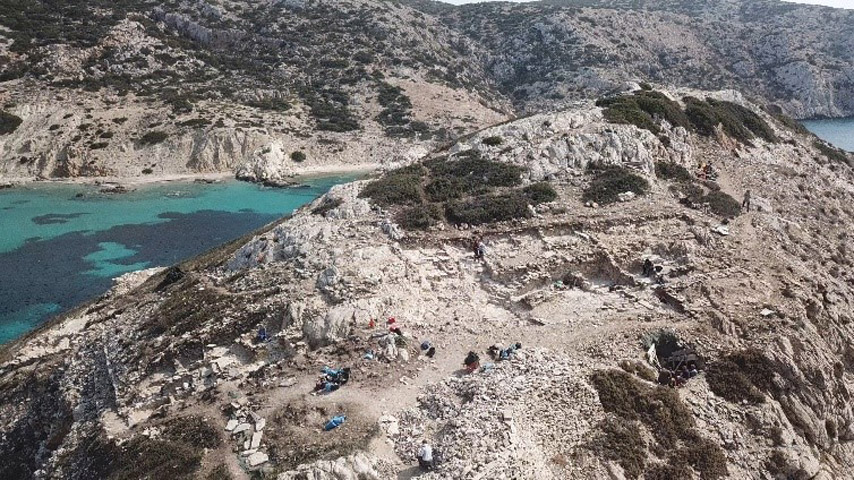 Article by the Independent on excavations at Dhaskalio

The most ancient monumental building complex in the Greek world

Excavations on the islet of Dhaskalio, off Keros, 125 miles south east of Athens have uncovered the most ancient complex of monumental buildings ever to be found in the Greek world, says the front page of the Independent’s website. The site dates back almost 4,600 years and according to the article perhaps forms part of the inspiration of a key aspect of Greek religion; the belief that mountain tops were the dwelling places of the gods. The building complex uncovered on the islet once joined to the Cycladic island of Keros by a narrow strip of land ‟changes archaeologists’ understanding of Prehistoric Greece”, adds the article.

Until now, nobody had realized the true scale of the complex and the huge effort that had gone into its construction. Archaeologists today believe that for the building of the complex, early Bronze Age Greeks made at least 3,500 maritime voyages to transport between 7,000 to 10,000 tons of shining white marble from one Aegean island to another. Each return trip would require up to 24 crew members to row for at least five hours.

“It is by far the largest prehistoric marine transport operation that has ever come to light anywhere in the world,” said Dr Julian Whitewright, maritime archaeologist at the University of Southampton. “It demonstrates quite clearly just how important, and integral to their culture, seafaring was to these early Bronze Age Aegean people”, he adds.

According to the article, the voyages, in total around 45,000 miles, allowed the architects to build what is believed to have been a huge religious sanctuary made up of more than 60 marble buildings specifically made to gleam in the sun. Moreover, the architects formed on the sloping terrain of the island known over the last centuries as Dhaskalio around 1,000m of artificial terraces arranged in six ‟steps”. These approximately six metre wide terraces have been especially constructed to accommodate all the buildings. The summit, not initially built on, had a small probably sacred open space, maybe for depositing votive offerings.

“Our investigation has been transforming our understanding of early Bronze Age Cycladic culture and suggests that these very early Greeks were organisationally, technically and politically much more advanced than previously thought,” said, always according to the Independent the project’s co-director Michael Boyd of Cambridge University.

The article also mentions the ‟pyramidic” shape of the island. It is not entirely certain whether this form was significant, but the place had certainly been chosen specifically as a site of worship, compared with other much higher, more impressive and more accessible mountains without that shape.

It should be reminded that according to the Greek Ministry of Culture, the four year research project at the prehistoric site of Dhaskalio was completed last autumn with the discovery of impressive architectural remains of an important Proto Cycladic settlement. The fourth and final period of field research took place during September and October 2018 as part of the research programme ‟Maritime routes of Keros and Naxos”, realized by Cambridge University, under the auspices of the British School at Athens, supervised by the Cyclades Ephorate of Antiquities. The project was headed by Professor Colin Renfrew, Dr Michael Boyd and Irene Legaki of the Cyclades Ephorate of Antiquities acted as deputy head.

Lastly, there is mention of archaeological material from Keros and Dhaskalio being included in the temporary exhibition ‟δες απέναντι” [‟look opposite”], running from July 15 to September 30, 2019 at the Koufonissi Archaeological Collection. Among the material exhibited will also be finds from recent archaeological research on Dhaskalio, presented to the public for the first time.