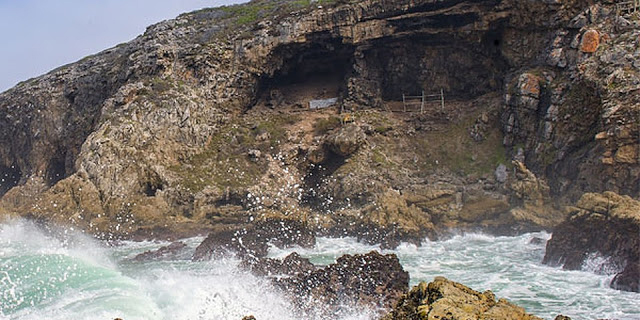 Places we once called home

There was a time when the laughter of Stone Age children filled the Sibudu Cave. About 64 000 years ago, a child was part of a hunter-gatherer family that took temporary shelter in this cave, which lies close to the KwaZulu-Natal town of KwaDukuza.

When this child died, it didn’t leave its bones in the cave for discovery by archaeologists of the future—the only thing left behind was a milk tooth. In modern times, the mythological tooth fairy whisks away children’s teeth, but we don’t know what the rituals were back then.

Professor Lyn Wadley, archaeologist in the School of Geography, Archaeology and Environmental Studies at Wits, is thankful that this tooth—and those of other children—ended up on the cave floor, because they reveal just how much humans have changed since we gave up our hunter-gatherer ways.

“The interesting thing about the teeth is that we know this is a home-base, because there were children there, and that is quite nice,” says Wadley. “But the [research] papers also suggest that the teeth were perhaps a little bit larger than the teeth of children today. So maybe the people were a little more robust.” These children perhaps had access to better diets than we have today.

“A lot of people have pointed out that moving to the diet that farming people had was not necessarily improving the health of people. There are higher carbohydrates compared to protein, and with it comes poorer tooth quality and poorer bone quality,” says Wadley.

“Part of the reason why hunter-gatherers had a better diet was not because of what they were eating, but the fact that groups were smaller and this meant that people had better access to quality plant foods.”

Cave sites like Sibudu are providing scientists with a peek into what our earliest homes looked like. These glimpses give archaeologists not only a better understanding of how our ancestors lived, but also how we evolved into the species we are today.

From the deep past, scientists are uncovering the stuff that makes us human—from forward planning, to the very beginnings of art. One of these discoveries is that our ancestors were not homebodies. We were wanderers who kept our stays short.

At Blombos Cave in the southern Cape, Professor Christopher Henshilwood and his team have been sifting through the leftovers of these brief visits that go back over 100 000 years. Henshilwood holds the DST/NRF SARChI Chair in The Origins of Modern Human Behaviour at Wits University and is the Director of the Centre for Early Sapiens Behaviour (SapienCE), a new Centre of Excellence at the University of Bergen in Norway.

“We think that Blombos, at some stages, was occupied for just one night. We are seeing what looks like a ghost of a visit. You find a few shellfish, a tiny little fire and almost nothing else. And then there is nothing after that,” says Henshilwood.

Some of the discoveries at Blombos have advanced our insight into early human cognitive development.

Last year, Henshilwood and his team revealed a silcrete (hardened mineral crust) flake to the world that had six crosshatched lines on it—much like a hashtag. A human, using an ochre crayon, 73 000 years ago, had drawn these lines.

It took two years of scientific testing to come to the conclusion that this is the earliest example of a drawing, says Henshilwood.

There are other artifacts left at these temporary homes that point to our ancestors being highly intelligent problem-solvers. At Border Cave on the Swaziland border, Wadley and Dr. Lucinda Backwell found traces of poison on a thin wooden stick that dates back at least 20 000 years. The poison is thought to have been used on arrows.Even this long ago, at Blombos Cave and Klipdrift Shelter, another of the sites excavated by Henshilwood’s team, you can see that people bring to the site what they need to carry out a particular task. “These people are capable of planning, they have templates or recipes in their heads, for what they need in the cave,” says Henshilwood. “This is one of the markers of behavioural modernity.”

When that artist made that drawing on that piece of silcrete, he or she would have been one of only about 10 000 humans living in the whole of Africa.

Wadley believes that snares were also used by the people who periodically made Sibudu their home. But it is the presence of buffalo bones in the cave that points to team work, which would have probably included women.

“If you look at your typical hunter-gatherer group—let us say there are 60 people—more than half of those are going to be children who wouldn’t take part in the hunt. Then you have some old people. So if you break down the demographics, you might only end up with 10 able-bodied male hunters,” says Wadley. “If you want to manage a dangerous animal hunt, you are going to have to bring in the women too, even if they are just beaters.”

What archaeologists are rarely seeing is evidence of other homes away from the caves and rock shelters. These rudimentary shelters would have been where our ancestors slept for a couple of nights before moving on.

Professor Robert Thornton, social anthropologist in the School of Social Sciences at Wits, says that three basic needs would have driven early humans into utilizing and making shelters. “Our earliest habitats were primarily designed to keep our food safe, secondarily to keep the goggas [insects] and other stuff away, and finally for climate control. But before that, it was important to keep your view open,” he says.

“People imagined that early man lived in caves, or they had to have four walls around them, but that is one of the worst things you can do, because you cannot see the rest of your environment. You want to be in the open, you want to see 360 degrees, particularly when there are big cats around.”

But it is in the caves where the treasures lie. It is here that the artifacts are best preserved, and where they accumulate in layers of earth that sometimes stretch back hundreds of thousands of years.

At Blombos, Henshilwood hopes he might one day find the rest of that silcrete flake that would reveal more of that earliest drawing.

But there are more artifacts to be found in places we once called home that will give us insight into a time when humans first began to act and think like we do.