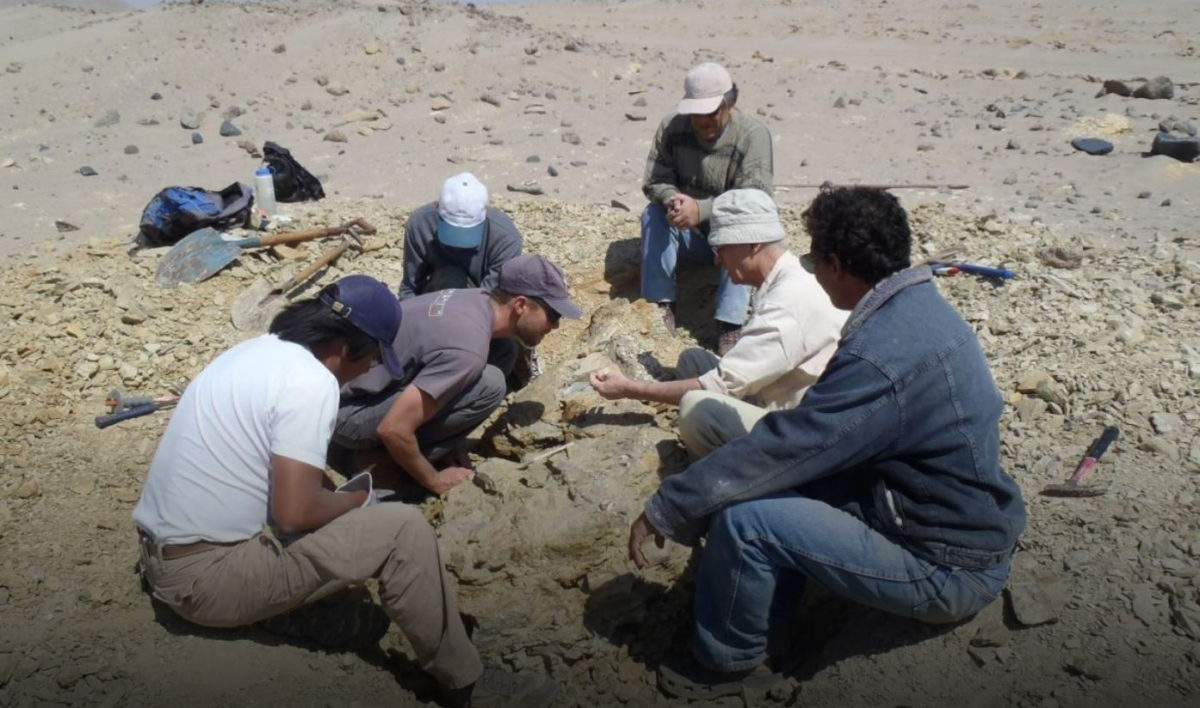 Scientists have a relatively precise idea about where whales and their closest terrestrial relatives evolved more than 50 million years ago (early Eocene), thanks to the discovery of ancient cetacean fossils in India and Pakistan.

Around 45 million years ago, four-legged whales (protocetids) gradually dispersed out of Asia, westward towards Africa and then reached the east coast of North America more than 41 million years ago. Due to the relatively fragmentary fossil record on both sides of the North Atlantic, questions remain about the path they took to make it to the New World and their locomotion abilities.

The importance of primitive whale, Peregocetus pacificus, lies in its completeness, location and age. This specimen represents the earliest skeleton of an amphibious whale from South America (and the whole Pacific). “The discovery of this new quadrupedal whale by our Peruvian colleague Mario Urbina was a great surprise for all of us. When we saw that most of the forelimb and hind limb elements were preserved (even including a kneecap and phalanges displaying marks of small hooves!) we realized that this was a major find”, Olivier Lambert stated. The specimen also includes mandibles, teeth, vertebrae, scapulae, pelvis, and many fore- and hind limb elements.

Sharing similarities with some western African protocetids, Peregocetus pacificus, supports the hypothesis that early quadrupedal whales crossed the South Atlantic from Africa to South America over 40 million years ago.

These early whales nearly attained a circum-equatorial distribution with a combination of terrestrial and aquatic locomotion abilities less than 10 million years after their origin in south Asia. Using large, most likely webbed feet with long toes, Peregocetus likely used its hindlimbs for underwater locomotion. This discovery is not the first amazing fossil find from the Pisco Basin of Peru.

“The Pisco Basin is an amazing region to study the evolution of marine mammals and other marine vertebrates. With rocks covering an interval of about 45 million years, we can follow the evolutionary history of many lineages, and interesting discoveries range from aquatic sloths and walrus-like dolphins to giant macroraptorial sperm whales and the oldest relatives of baleen whales”, co-author Giovanni Bianucci says.