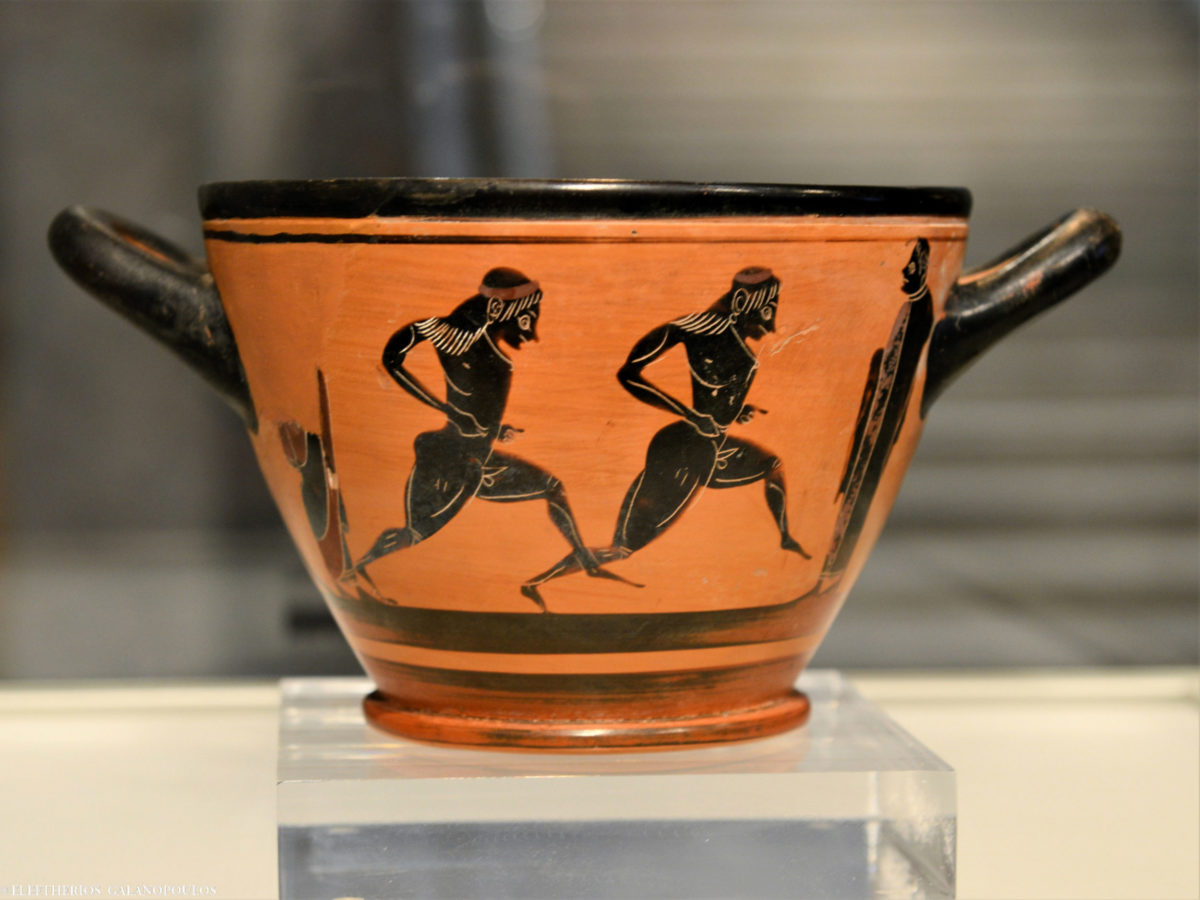 By the University of Münster

After almost one century, an ancient Greek vase returned to Greece from Germany last week. According to minister of Culture and Sports Lina Mendoni, “Its importance lies not so much in its being a work of antiquity nor in its artistic value, which is considerable, but because it is associated both with an exceptional event and an important figure of Greece’s modern history.”

This black figure 6th century BC skyphos vase, depicting a contest between two runners with the judges looking on, was given as a gift by the antique dealer Ioannis Lambros to Spyros Louis after his outstanding victory in the Marathon race in the 1896 Olympic Games in Athens. Since then there had been no information on the fate of the so called “Louis Skyphos”.

In 2014, George Kavvadias, Head of the Department of Ceramics, Metalwork and Minor Arts Collections of the National Archaeological museum, gathered information and publications of that era and bibliography regarding the Olympic games. During this time, he located a vase in the Archaeological Museum of Münster University in Germany, that had a lot in common with the “Louis Skyphos”. This vase belonged to the collection of the controversial German philosopher and collector Werner Peek who had lived in Athens between 1930 and 1937. All his collection was bought by Münster University in 1986. From his research supported in no small way by the University, Mr Kavvadias was convinced beyond any doubt that the skyphos at the University of Münster was the gift received by Louis for his victory in 1896.

Via the Directorate of Documentation and Protection of Cultural Goods, the Ministry of Culture and Sports sent the University of Münster an official claim . A long correspondence followed that led to an agreement on the skyphos being permanently returned to Greece as recognition on behalf of Germany of the particular importance of this vase for our country.

The Rector of Münster University Professor J.-P. Wessels, the head of the Archaeological Museum professor A. Lichtenberger and archeologist Dr H.-H. Nieswandt handed over the ancient artefact to the Minister of Culture and Sports Lina Mendoni. The “Louis Skyphos” will be exhibited till the end of February 2020 at the national Archaeological Museum ,while as announced by the Minister , from March 2020- on the occasion of the lighting of the flame for the Olympic games in Tokyo- the vase will be permanently exhibited in the Museum of the History of the Olympic Games of Antiquity in ancient Olympia. She noted that it is the only thematic museum in this country and so particular attention should be paid to it.

In the ceremony held last Wednesday at the National Archaeological Museum, the Rector of Münster University said that “there are moments like today which occur only once and leave their mark. I am honoured to be accompanying the skyphos to Greece. I am a physicist and so cannot speak about its archaeological value; I can simply say that it is magnificent. There could have been no better moment for its return, knowing that a few days ago the Marathon race took place in Athens”.

“In 1896” said head of the National Archeological Museum Maria Lagogianni, “it had been hoped that the revival of the Olympic Games would strengthen the ties of mutual affection between Greece and other countries. Today, the return of the ancient skyphos from the University Collection of Münster shows the results of dialogue and mutual respect between peoples. Culture creates bridges that connect our countries”.

George Kavvadias referred to the history of the skyphos in detail, of how it was offered to Spyros Louis as a gift by Ioannis Lambros, finding itself next in Germany and ending up in the 1980s in the archaeological collection of Münster University where it was located.