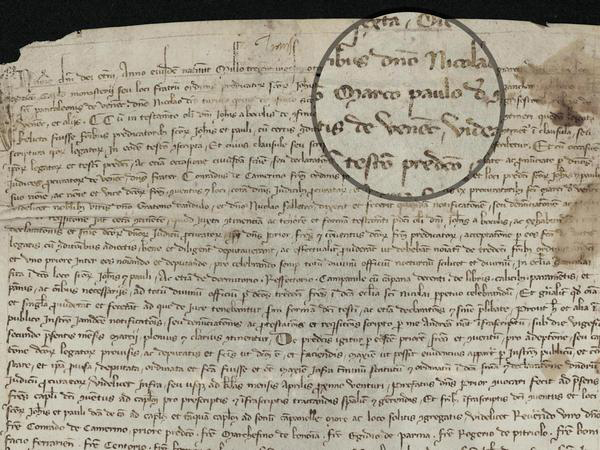 A glimpse into the life of Marco Polo

A new discovery on Marco Polo was made possible thanks to the work of a team of young, brilliant Ca’ Foscari researchers (BIFLOW project, supervised by prof. Antonio Montefusco of the Department of Humanities), who have recently uncovered a previously unknown document that gives us a glimpse into Marco Polo’s life after his return to Venice and a year before his death.

This extremely important finding adds a piece of the puzzle to our current knowledge of the Venetian explorer’s biography and his connections to local religious orders.

Marcello Bolognari, who recently graduated from Ca’ Foscari and is now a scholarship recipient working for the “Biflow” project, has discovered a new document bearing the name of Marco Polo. This record, dating back to 1323, belongs to the Venice State Archive (where most of the documents produced by the institutional bodies of the Venetian Republic are kept) and it concern the acceptance of a bequest left by Giovanni dalle Boccole to the Dominican friars of the Santi Giovanni e Paolo convent in Venice.

The famous traveller «Marco Paulo de confinio Sancti Iohannis Grisostomi» was among the witnesses of this notary deed; in fact, Marco Polo was known to reside in that exact part of town, where his father Nicolo and his uncle Maffeo had acquired a house. To further confirm his identity, in the long list of clergymen included in the document, we find the names of Benevenuto and Centorio, the same Dominican friars who Marco Polo included in his will the following year.

Marcello Bolognari, the protagonist of this sensational finding, graduated from the School of Archival Science, Paleography and Diplomatics of the Venice State Archive in 2017 and, since then, he has spent quite some time in the Archive’s study hall. Upon the discovery, the Archive’s officers and the research team members were immediately alerted — the bibliographical inspection that followed confirmed that the record had in fact remained undiscovered up to that point.

The connection between Marco Polo’s written work and its reception by the local community and religious circles is the object of Prof. Antonio Montefusco’s research work. Together with his team of researchers, he is currently working on the medieval translation of The Travels of Marco Polo from a historical, social and cultural point of view (within the framework of an ERC project, the StGrant 675333 “Biflow”, funded by the European Community).

The discovery of this document has proved of great importance for this project, for at least two reasons.

First of all, this piece of parchment offers new information on the life of Marco Polo following his return to Venice, a period of time on which we know almost nothing about: it paints the picture of a man who was not only involved in the management of his family’s business, but also in the religious life of that era, especially that of the Dominican order (a crucial actor in Italy’s urban society between the 13th and 14th century, especially in the symbolic and cultural field).

Secondly, the record offers a new interesting take on the fascinating theory that, after his imprisonment in Genoa and following his return to Venice, Marco Polo dedicated himself to the revision of his work (which had been drafted in Genoa together with Rustichello da Pisa in the years around 1298), employing the help of the Dominican friars at Santi Giovanni e Paolo; this revision work is attested by the peculiar traits of the so-called “redazione latina Z” (latin redaction Z), which, according to numerous records, was written in Venice, more precisely in a Dominican environment.

“One of the most fascinating – and probably lesser known – characteristics regarding the circulation of The Travels of Marco Polo consists in the many different Latin translations of the manuscript – stated Antonio Montefusco, coordinator of the research team – One of these translations was drafted at the beginning of the 12th century by a Dominican friar called Francesco Pipino, perhaps even at the request of the Order. This version was a great success and granted the distribution of the book Europe-wide. Friars immediately took interest in Marco’s written work: The Travels of Marco Polo was a precious source of information on travel routes and spiritual beliefs in the East.

For these reasons, the Dominicans, who were both missionaries and travellers, read the book, transformed it and reused it in their works up to the Modern age. This newly discovered record proves the idea that this interest was born of out of a direct relationship between the famous explorer and the Dominican order of Santi Giovanni e Paolo, which leads us to believe that the Venetian friars might have lent a hand to Marco’s revision of the book, acting almost as contemporary editors”.

A new collaboration has been launched on the topic, involving the team coordinated by prof. Eugenio Burgio and dr. Samuela Simion, who are currently working on a digital integral edition of The Travels of Marco Polo (after editing the version by Giovanni Battista Ramusio). The partnering teams have recently organized a seminar on the reception of Marco Polo’s work by the Mendicant Orders, a vast research subject which will soon become an open access publication by Edizioni Ca’ Foscari, our in-house University Press. The new document will also be inserted in the publication, together with other essays on the success and transformation of The Travels of Marco Polo in the written works of mendicant friars.

It was the very idea behind this publication that became the starting point for this incredible discovery at the State Archive in Venice, as it pushed researchers to look for official records of the connection between the author of The Travels of Marco Polo and the Dominican order.

Ca’ Foscari University of Venice and the State Archive are now signing a partnership agreement that will surely stimulate new research projects on a wide array of topics.