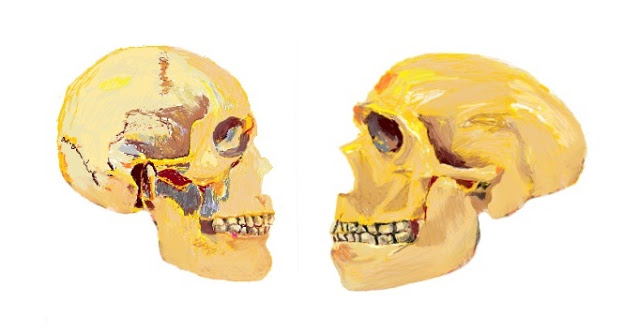 The study was published in Science Advances

The study, published in Science Advances, results from the collaboration between a UB team led by Cedric Boeckx, ICREA professor from the Section of General Linguistics at the Department of Catalan Philology and General Linguistics, and member of the Institute of Complex Systems of the UB (UBICS), and researchers from the team led by Giuseppe Testa, lecturer at the University of Milan and the European Institute of Oncology.

The idea of human self-domestication dates back to the 19th century. It is the claim that anatomical and cognitive-behavioral hallmarks of modern humans, such as docility or a gracile physiognomy, could result from an evolutionary process bearing significant similarities to the domestication of animals.

Earlier research by the team of Cedric Boeckx had found genetic similarities between humans and domesticated animals in genes. The aim of the present study was to take a step further and deliver empirical evidence focusing on neural crest cells. This is a population of migratory and pluripotent cells—able to form all the cell types in a body—that form during the development of vertebrates with great importance in development.

“A mild deficit of neural crest cells has already been hypothesized to be the factor underlying animal domestication. Could it be that humans got a more prosocial cognition and a retracted face relative to other extinct humans in the course of our evolution as a result of changes affecting neural crest cells?” asks Alejandro Andirkó, PhD students at the Department of Catalan Philology and General Linguistics of the UB, who took part in the study.

To test this relationship, researchers focused on Williams Syndrome disorder, a specific human neurodevelopmental disorder characterized by both craniofacial and cognitive-behavioral traits relevant to domestication. The syndrome is a neurocristopathy: a deficit of a specific cell type during embryogenesis. In this case, neural crest cells.

In this study, researchers from the team led by Giuseppe Testa used in vitro models of Williams syndrome with stem cells derived from the skin. Results showed that the BAZ1B gene—which lies in the region of the genome causing Williams Syndrome—controls neural crest cell behavior: lower levels of BAZ1B resulted in reduced neural-crest migration, and higher levels produced greater neural-crest migration.

Researchers examined this gene in archaic and modern human genomes. “We wanted to understand if neural crest cell genetic networks were affected in human evolution compared to the Neanderthal genomes”, Cedric Boeckx said.

Results showed that that BAZ1B affects a significant number of genes accumulating mutations in high frequency in all living human populations that are not found in archaic genomes currently available. “We take this to mean that BAZ1B genetic network is an important reason our face is so different when compared with our extinct relatives, the Neanderthals,” Boeckx said. “In the big picture, it provides for the first time experimental validation of the neural crest-based self-domestication hypothesis,” continues.

These results open the road to studies tackling the role of neural crest cells in prosociality and other cognitive domains but is also one of the first examples of a potential subfield to test evolutionary claims. “This research constitutes one of the first studies that uses cutting-edge empirical technologies in a clinical setting to understand how humans have evolved since the split with Neanderthals, and establishes Williams Syndrome in particular as a unique atypical neurodevelopmental window onto the evolution of our species,” Boeckx concludes.