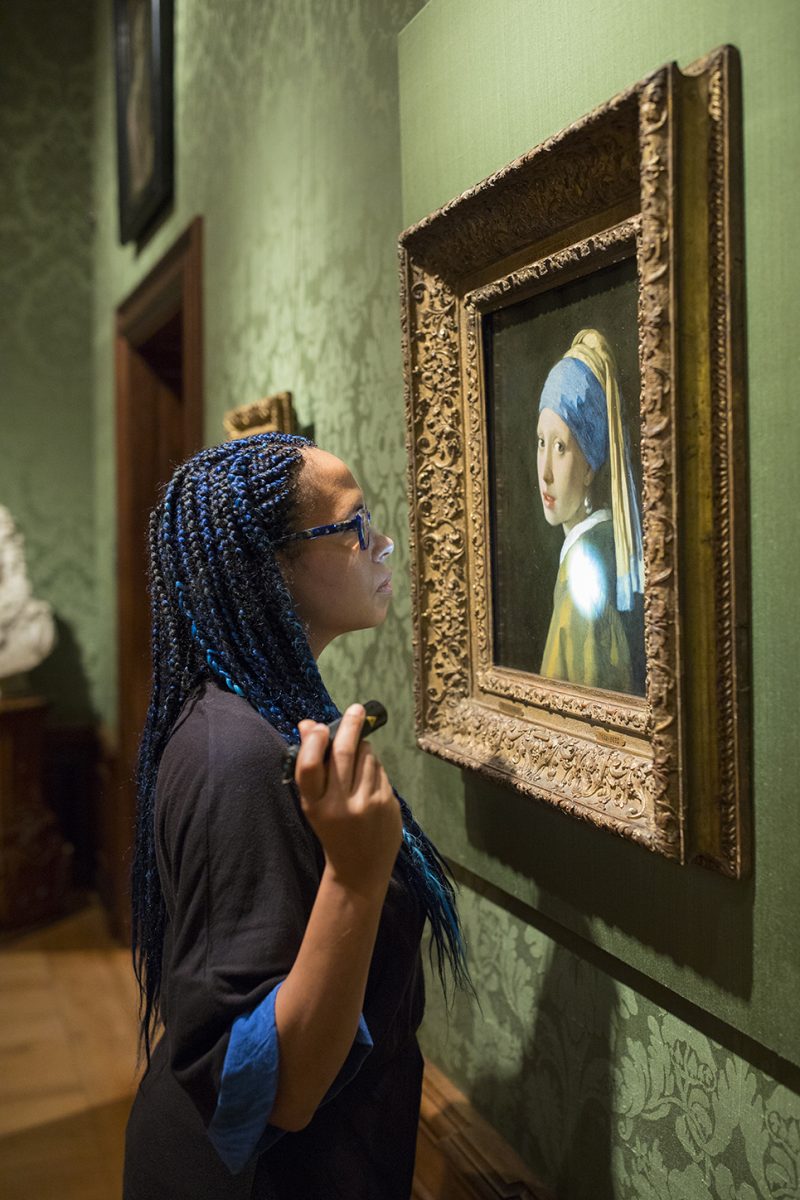 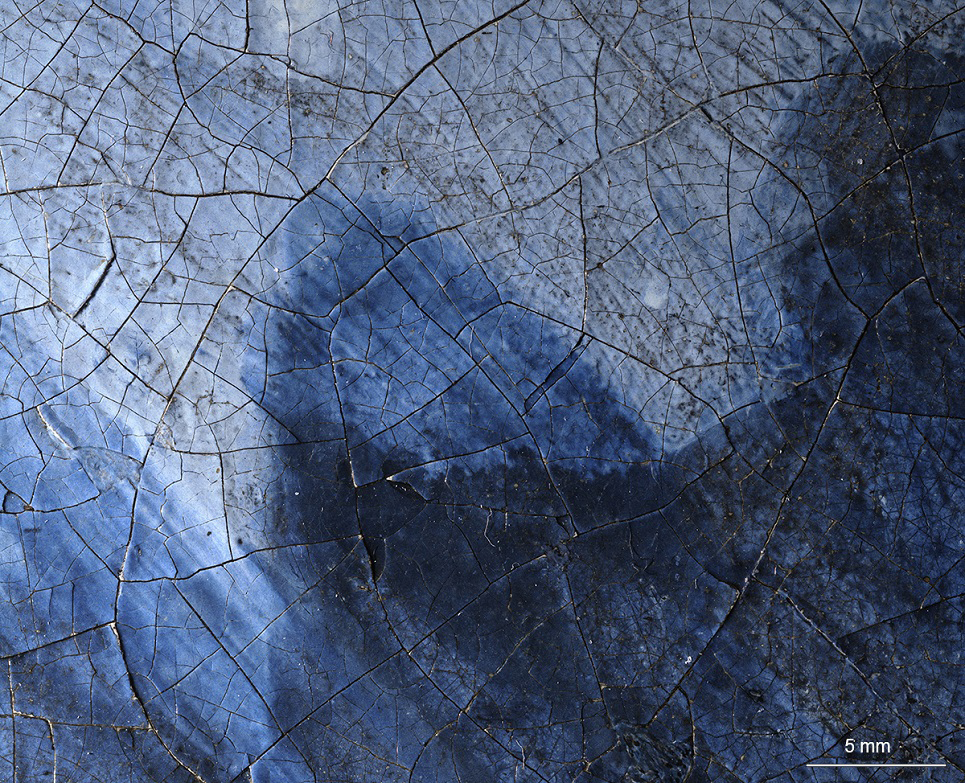 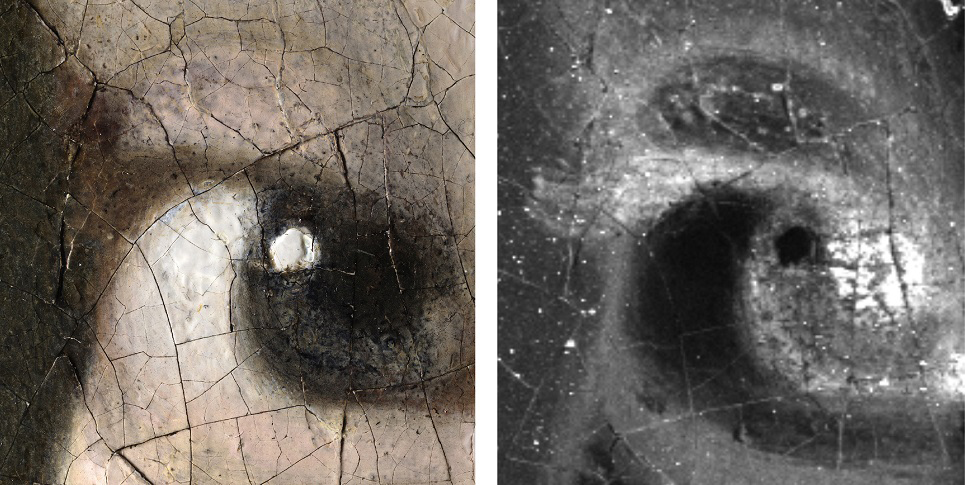 Closer to Vermeer and the Girl

New discoveries and insights from the international scientific examination

Girl with the Pearl Earring (c. 1665) by Johannes Vermeer is one of the most famous paintings in the world. Two years ago, an international team of scientists from various museums and institutions examined Vermeer’s masterpiece in full public view. Now, two years later, the team unveils their new discoveries.

Why this technical research?

Was the Girl a complete mystery? No, certainly not. The painting had already been examined in 1994. But over the last 25 years, the technical possibilities have improved significantly, so now we can investigate more deeply than in the previous century. Because this painting appeals so much to the imagination, there were questions we still wanted to answer.

How did Vermeer create this wonderful painting? What lies beneath the visible composition? What kind of pigments did he use? Where did they come from? How has the painting changed since it left Vermeer’s studio?

One of the most surprising findings was that the background is not simply an empty dark space; Vermeer painted the Girl in front of a green curtain. Imaging techniques visualised diagonal lines and colour variations that suggest folded fabric in the upper right-hand corner of the painting. The curtain has disappeared over the course of the centuries as a result of physical and chemical changes in the translucent green paint.

Changes to the composition

The new research revealed that Vermeer made changes to the composition during the painting process: the position of the ear, the top of the headscarf and the back of the neck were shifted.

The recent study also brought us closer to Vermeer and his subtle painting techniques. Vermeer began composing the painting in various shades of brown and black. Infrared imaging visualised broad vigorous brushstrokes in these underlayers, which now lie beneath the visible paint. He painted the contours of the Girl with thin black lines.

The painter worked systematically from the background to the foreground: after painting the greenish background and the skin of the Girl’s face, he then successively applied her yellow jacket, white collar, headscarf and ‘pearl’. The pearl is an illusion – translucent and opaque touches of white paint – and the hook to hang the ‘pearl’ from her ear is missing. Lastly, Vermeer signed his artwork in the upper left-hand corner with IVMeer. Here and there, fine hairs from Vermeer’s brush have been left behind.

Abbie Vandivere, Head of The Girl in the Spotlight project and conservator at the Mauritshuis, explains more about the painting process.

The research identified and accurately mapped Vermeer’s colour palette in this painting for the first time. The raw materials for the colours came from all over the world: regions that today belong to Mexico and Central America, England and possibly Asia or the West Indies. Vermeer’s liberal use of high-quality ultramarine in the headscarf and the jacket is striking. Made from the semi-precious stone lapis lazuli that came from what is now Afghanistan, the preparation of natural ultramarine was time-consuming and laborious. In the 17th century, the pigment was more precious than gold. One discovery from the recent project is that the stone may have first been heated at a high temperature, which made it easier to grind and produced a more intense blue colour.

We were keen to find out: who was the Girl with the Pearl Earring? Martine Gosselink, director of the Mauritshuis: “Spoiler alert: no, we didn’t find out who this young lady was and if she ever really existed. But we did get a little closer to her. The research team made a number of discoveries that make the Girl a lot more personal.”

Vermeer’s Girl with a Pearl Earring was not a portrait. It displays too few distinctive features for that. In Vermeer’s day these kind of studies were referred to as tronies. They depict a certain type or character; in this case a girl wearing an oriental turban and an improbably large pearl in her ear.

Even though a girl possibly sat and posed for this painting, there are no moles, scars or freckles to be seen. However, while to the naked eye the Girl has always appeared to have had no eyelashes, macro-X-ray fluorescence scanning and microscopic examination did reveal that Vermeer painted tiny hairs around both eyes.

These discoveries make the Girl more ‘personal’ than previously thought, but the question of who exactly the Girl was still remains a mystery.

Closer than ever before

Abbie Vandivere, head of research team: “Our scientific examination has brought us closer to Vermeer and the Girl than ever before. Combining and comparing different scientific technologies has provided so much more information than a single technology would have done on its own (fig. 01 & 02). Girl with a Pearl Earring is a more personal image than was previously thought. This examination has also documented the current condition of the painting, meaning we can optimally monitor any changes that may occur in the future.”

The Girl hasn’t revealed the secret of her identity yet, but we got to know her better through a unique collaboration of an international team of scientists using state-of-the-art techniques.

Martine Gosselink, director of the Mauritshuis: “Please know that this is not the end point of our research, but an intermediate station. We want to go even further with the research. The technical possibilities continue to develop. The collaborations are growing, and so is the desire to find out more. Of course we will keep you informed!”

The research team was led by Mauritshuis paintings conservator Abbie Vandivere. The Girl in the Spotlight was a Mauritshuis initiative and involved a team of internationally recognised specialists associated with the Netherlands Institute for Conservation+Art+Science+ (NICAS: Rijksmuseum, TU Delft, the Cultural Heritage Agency of the Netherlands (RCE) and the University of Amsterdam), together with the University of Antwerp, Vrije Universiteit Amsterdam, Shell Technology Centre Amsterdam, Hirox Europe, the National Gallery of Art, Washington and many other partners.