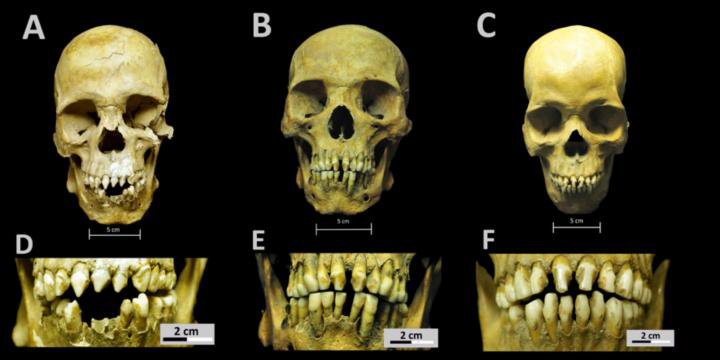 Five centuries after Charles I of Spain authorized the transport of the first African slaves to the Viceroyalty of New Spain, the ancestry of the hundreds of thousands of abducted and enslaved people forms an integral part of the genetic and cultural heritage of the Americas. The origins and experiences of those enslaved individuals, however, remains largely unknown.

This study, published in Current Biology, applies an interdisciplinary approach to explore the backgrounds and living conditions of three African individuals recovered from a mass grave on the grounds of Hospital Real de San José de los Naturales, an early colonial period hospital in Mexico City officially devoted to the indigenous population. Dated to the 16th century, these individuals tell the stories of some of the earliest people forcefully relocated to the Americas in the early years of European colonialism.

The three individuals in the study first caught the attention of the team with their distinct dental modifications, a filing of the upper front teeth consistent with cultural practices recorded for African slaves which can still be observed in some groups living in western Africa today.

“Combining molecular biology, isotopic data and bioinformatic tools with classical historical, anthropological and archaeological evidence allowed us to gain insights into the life history of some of the earliest African slaves in the Americas,” says Johannes Krause, director of the Department of Archaeogenetics at the Max Planck Institute for the Science of Human History (MPI SHH).

Genetic analysis showed that all three individuals shared a Y-chromosome lineage that is highly prevalent in Sub-Saharan Africa, and which is now the most common lineage among African Americans. Combined with isotopic data showing that all three individuals were born outside of Mexico and osteobiographies showing years of physical abuse before premature death, the findings suggest that these individuals may be among the first Africans to reach the Americas after being abducted in their homelands in Sub-Saharan Africa.

“Modern lab techniques allow us to gather incredible amounts of data from very little biological material. The amount of information we can give back to archaeologists, anthropologists and society today using only one tooth from each individual is something we could only dream about just ten years ago,” says Rodrigo Barquera, the study’s lead author.

The spread of pathogens across the Atlantic

Researchers from all three departments and one independent group of the MPI SHH and two laboratories from the ENAH combined their expertise to tell the story of these individuals, examining not only their ancestry and origins, but also their health status and life experiences. The team was able to reconstruct two full pathogen genomes from tooth samples. One individual was infected with a strain of the Hepatitis B virus (HBV) typically found in western Africa today.

“Although we have no indication that the HBV lineage we found established itself in Mexico, this is the first direct evidence of HBV introduction as the result of the transatlantic slave trade,” says Denise Kühnert, leader of the tide research group at MPI SHH. “This provides novel insight into the phylogeographic history of the pathogen.”

Another individual was infected with Treponema pallidum pertenue which causes yaws, a painful infection of the bones similar to syphilis that affects joints and skin. The same strain of yaws has been previously identified in a 17th century colonist of European descent, suggesting the establishment of this disease lineage of African origin in the early colonial population of Mexico.

“This study sheds light into early cases of yaws after the European colonization of the Americas,” says Aditya Kumar Lankapalli of MPI SHH. “Future studies should focus on understanding the transmission and introduction of this pathogen to the Americas. More high-coverage ancient Treponema genomes will allow us to get a better understanding of the coevolution and adaptation of this pathogen to humans.”

“Interdisciplinary studies like this will make the study of the past a much more personal matter in the future,” adds Thiseas C. Lamnidis. The authors hope that future interdisciplinary endeavors will continue to provide insights into the lives, deaths and legacies of historically oppressed groups whose stories have been buried, often in mass graves.