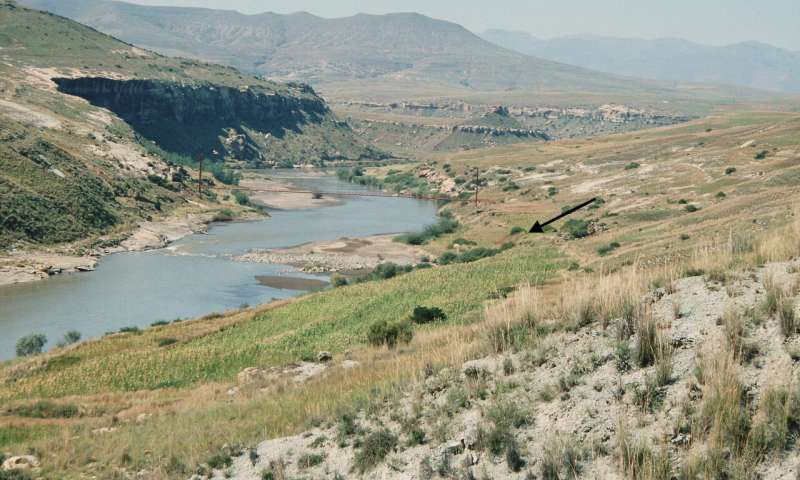 Chemical evidence of dairying by hunter-gatherers in Lesotho

In the first millennium AD

After analysing organic residues from ancient pots, a team of scientists led by the University of Bristol has uncovered new evidence of dairying by hunter-gatherers in the landlocked South African country of Lesotho in the mid-late first millennium AD.

The study on organic residue analysis from South African hunter-gatherer pots has been published in Nature Human Behaviour. Extensive archaeological evidence shows that Early Iron Age agricultural communities settled in the coastal regions of KwaZulu-Natal in South Africa from around AD 400.

Although these farmers appear to have been in contact with local lowland hunter-gatherer groups, it was long assumed that they had little or no direct contact with hunter-gatherers already occupying the mountainous regions of Lesotho, as they did not settle the region until the 19th century due to the unsuitability of the mountains for crop cultivation.

Over the past several decades however, remains of domestic animal bones have been uncovered in several sites in the Maloti-Drakensberg Mountains in Lesotho in hunter-gatherer contexts dating to the 1st and 2nd millennia AD.

At one site in particular – Likoaeng – domestic animal bones were found in association with an Early Iron Age potsherd and some fragments of iron. This discovery led to the suggestion that the hunter-gatherers occupying the site were following a ‘hunters-with-sheep’ mode of subsistence that incorporated the keeping of small numbers of livestock into what was otherwise a foraging economy and that they must have obtained these animals and objects through on-going contact with agricultural groups based on the coast.

In the past five years however, several studies have sequenced DNA from supposed domestic animal bones from these highland sites, and instead found them to belong to wild species. This led to the suggestion that the presence of domestic animals in the highlands, and therefore the level of contact, had been overestimated, yet the zooarchaeologists involved stand by their original morphological assessment of the bones.

Lead researcher, Helen Fewlass, now based at the Max Planck Institute for Evolutionary Anthropology (Leipzig) but who carried out the work as part of her master’s project in the University of Bristol’s Department of Anthropology and Archaeology, said: “We used organic residue analysis to investigate fats that become absorbed into the porous clay matrix of a pot during its use.

“We extracted and analysed lipid residues from pots from two hunter-gatherer sites with domestic livestock remains in the highlands of Lesotho, Likoaeng and Sehonghong, dating to the mid-late first millennium AD and compared them to lipids extracted from pots from a recent nearby agricultural settlement, Mokatlapoli.

“This allowed us to explore the subsistence practices of the hunter-gatherers occupying these sites to see if there was any evidence for their contact with farming groups.”

The team found that dairy residues were present in approximately a third of the hunter-gatherer pots. They directly radiocarbon dated a dairy residue from Likoaeng to AD 579-654 and another from Sehonghong to AD 885-990. The results confirm the presence of domestic animals at these sites in the 1st millennium AD.

The team also observed patterning in the stable carbon isotopic values of fatty acids in the residues, which imply that different methods of animal husbandry were practised by the 1st millennium hunter-gatherer groups compared to the recent agricultural group occupying the same region.

The stable carbon isotopic values of dairy residues from the agricultural site clearly reflect the introduction of crops such as maize and sorghum into the region in the late nineteenth century and the foddering of domestic animals upon them.

As the hunter-gatherer groups must have learnt animal husbandry techniques, the results support the notion that hunter-gatherer groups in the highlands of Lesotho had on-going contact with farming communities in the lowlands, rather than just obtaining the animals through raids or long-distance exchange networks. Based on the direct date of the dairy residue from Likoaeng, contact must have been established within a few centuries of the arrival of agricultural groups in the coastal regions of South Africa.

The results also have implications for the on-going debate about the molecular vs morphological assessment of the faunal remains. The results of the organic residue analysis support the osteoarchaeological evidence for the presence of domestic animals at Likoaeng and Sehonghong. However, as large amounts of milk can be generated from one domestic animal, the prevalence of dairy residues does not tell us how many domestic animals were present.

Direct radiocarbon dating of domestic faunal remains in these contexts has been hampered by poor collagen preservation. The new method (published earlier this month in Nature) for direct dating of fats extracted from potsherds represents a new avenue for placing the arrival and presence of domestic animals in the area in a secure chronological context.

Helen Fewlass added: “The presence of dairy fats in pots from Likoaeng and Sehonghong in highland Lesotho shows that hunter-gatherers in the mountains had adopted at least sporadic use of livestock from agricultural groups in South Africa not long after their arrival in the 1st millennium AD.”

Co-author, Dr Emmanuelle Casanova, from the University of Bristol’s Organic Geochemistry Unit – part of the School of Chemistry, added: “In addition to the identification of dairying practices we were able apply a brand-new dating method for pottery vessels to verify the antiquity of the dairy residues which perfectly fits with the age of the hunter-gatherer groups.”

This study represents the first analysis and direct radiocarbon dating of organic residues from pottery from south-eastern Africa. The high level of preservation found implies that the method has great potential for further applications in the region. This mountainous area of Lesotho has other hunter-gatherer sites containing pottery in contexts dating to the 1st and 2nd millennium AD so there is potential to expand this type of analysis to other sites in the region to understand whether this practise was relatively isolated or ubiquitous.