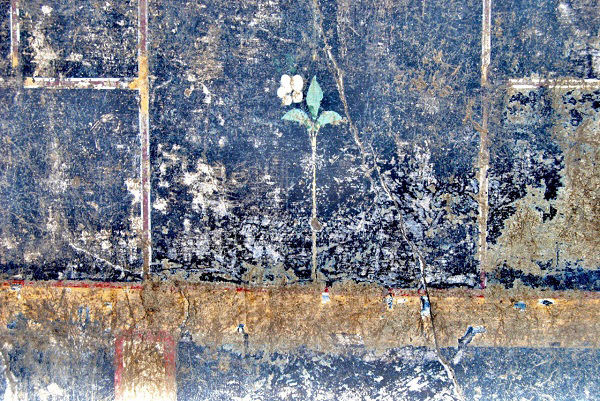 The vault of a cryptoporticus in Pompeii villa comes to light

We see a white flower that stands out delicately from the vibrant black background of a wall. This is the vault of a large cryptoporticus yet to be explored, with the name of a young girl — “Mummia” — scratched onto a wall, and which is found in the suburban villa of Civita Giuliana, which the archaeologists of Pompeii recommenced work on last week.

The villa is located to the north of the excavations, outside the walls of the archaeological site, and has been the focus of a joint operation with the Public Prosecutor’s Office of Torre Annunziata with the Prosecutor Pierpaolo Filippelli, the Carabineri and the Park, which in 2018 led to the discovery of a series of service rooms and a stable of the estate, within which it was possible to make the cast of a thoroughbred horse.

During the initial phase of the excavation, a wooden trough was identified, from which it was also possible to make a cast, along with the intact outline of a horse and the legs of a second animal. The excavation operations subsequently revealed the entire room, where the remnants of a second horse and a third equid were identified, together with the remains of a rich military harness.

The villa most likely belonged to a general or a high-ranking military magistrate, perhaps indeed a member of the Mummii, as the name scratched onto the wall by a girl seems to indicate, as do inscriptions which are the subject of current in-depth study. The villa was only partially damaged by the earthquake which preceded the eruption of AD 79.