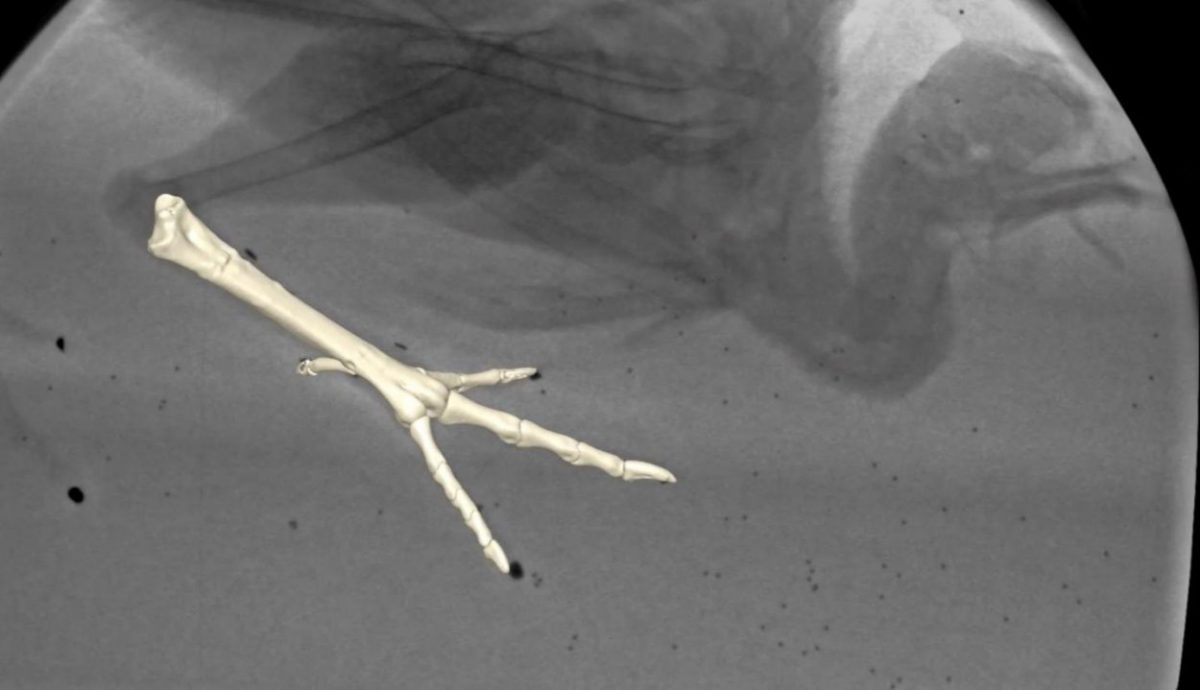 When picturing dinosaur tracks, most people imagine a perfectly preserved mold of a foot on firm layer of earth.

But what if that dinosaur was running through mud, sinking several inches — or even up to their ankles — into the ground as it moved?

Using sophisticated X-ray-based technology, a team of Brown University researchers tracked the movements of guineafowl to investigate how their feet move below ground through various substrates and what those findings could mean for understanding fossil records left behind by dinosaurs.

And part of what that means is that fossilized dinosaur tracks that look distinct from each other, and appear to be from different species, might instead come from the same dinosaurs.

“This is the first study that’s really shown how the bird foot is moving below ground, showing the patterns of this subsurface foot motion and allowing us to break down the patterns that we’re seeing in a living animal that has feet similar to those of a dinosaur,” said Morgan Turner, a Ph.D. candidate at Brown in ecology and evolutionary biology and lead author of the research. “Below ground, or even above ground, they’re responding to these soft substrates in a very similar way, which has potentially important implications for our ability to study the movement of these animals that we can’t observe directly anymore.”

The findings were published on Wednesday, July 1, in the Royal Society journal Biology Letters.

To make the observations, Turner and her colleagues, Professor of Biology and Medical Science Stephen Gatesy and Peter Falkingham, now at Liverpool John Moores University, used a 3D-imaging technology developed at Brown called X-ray Reconstruction of Moving Morphology (XROMM). The technology combines CT scans of a skeleton with high-speed X-ray video, aided by tiny implanted metal markers, to create visualizations of how bones and muscles move inside humans and animals. In the study, the team used XROMM to watch guineafowl move through substrates of different hydration and compactness, analyzing how their feet moved underground and the tracks left behind.

Sand, typically a dense combination of quartz and silica, does not lend itself well to X-ray imaging, so the team used poppy seeds to emulate sand. Muds were made using small glass bubbles, adding various amount of clay and water across 107 trials to achieve different consistencies and realistic tracks.

They added metal markers underneath the claws of the guineafowl to allow for tracking in 3D space. It’s these claw tips that the researchers think are least disturbed by mud flow and other variables that can impact and distort the form of the track.

Despite the variation, the researchers observed a consistent looping pattern.

“The loops by themselves I don’t think are that interesting,” Gatesy said. “People are like, ‘That’s nice. Birds do this underground. So what?’ It was only when [Turner] went back into it and said, ‘What if we slice those motion trails at different depths as if they were footprints?’ Then we made the nice connection to the fossils.”

By “slicing” through the 3D images of the movement patterns at different depths, the researchers found similarities between the guineafowl tracks and fossilized dinosaur tracks.

By recognizing the movement patterns, as well as the entry and exit point of the foot through various substrates, the team says they’re able to gain a better understanding of what a dinosaur track could look like.

“You end up generating this big diversity of track shapes from a very simple foot shape because you’re sampling at different depths and it’s moving in complicated ways,” Gatesy said. “Do we really have 40 different kinds of creatures, each with a differently shaped foot, or are we looking at some more complicated interaction that leaves behind these remnants that are partly anatomical and partly motion and partly depth?”

To further their research, the team spent time at the Beneski Museum of Natural History at Amherst College in Massachusetts, which is home to an expansive collection of penetrative tracks discovered in the 1800s by geologist Edward Hitchcock.

Hitchcock originally believed that his collection housed fossil tracks from over 100 distinct animals. Because of the team’s work with XROMM, Gatesy now thinks it’s possible that at least half of those tracks are actually from the same dinosaurs, just moving their feet in slightly different ways or sampled at slightly different depths.

“Going to museum together and being able to pick out these features and say, ‘We think this track is low in the loop and we think this one is high,’ that was the biggest moment of insight for me,” Turner said.

Turner says she hopes their research can lead to a greater interest in penetrative tracks, even if they seem a little less pretty or polished than the tracks people are used to seeing in museums.

“They have so much information in them,” Turner said, “and I hope that this gives people a lens, a new way to view these footprints and appreciate the movement preserved within in them.”