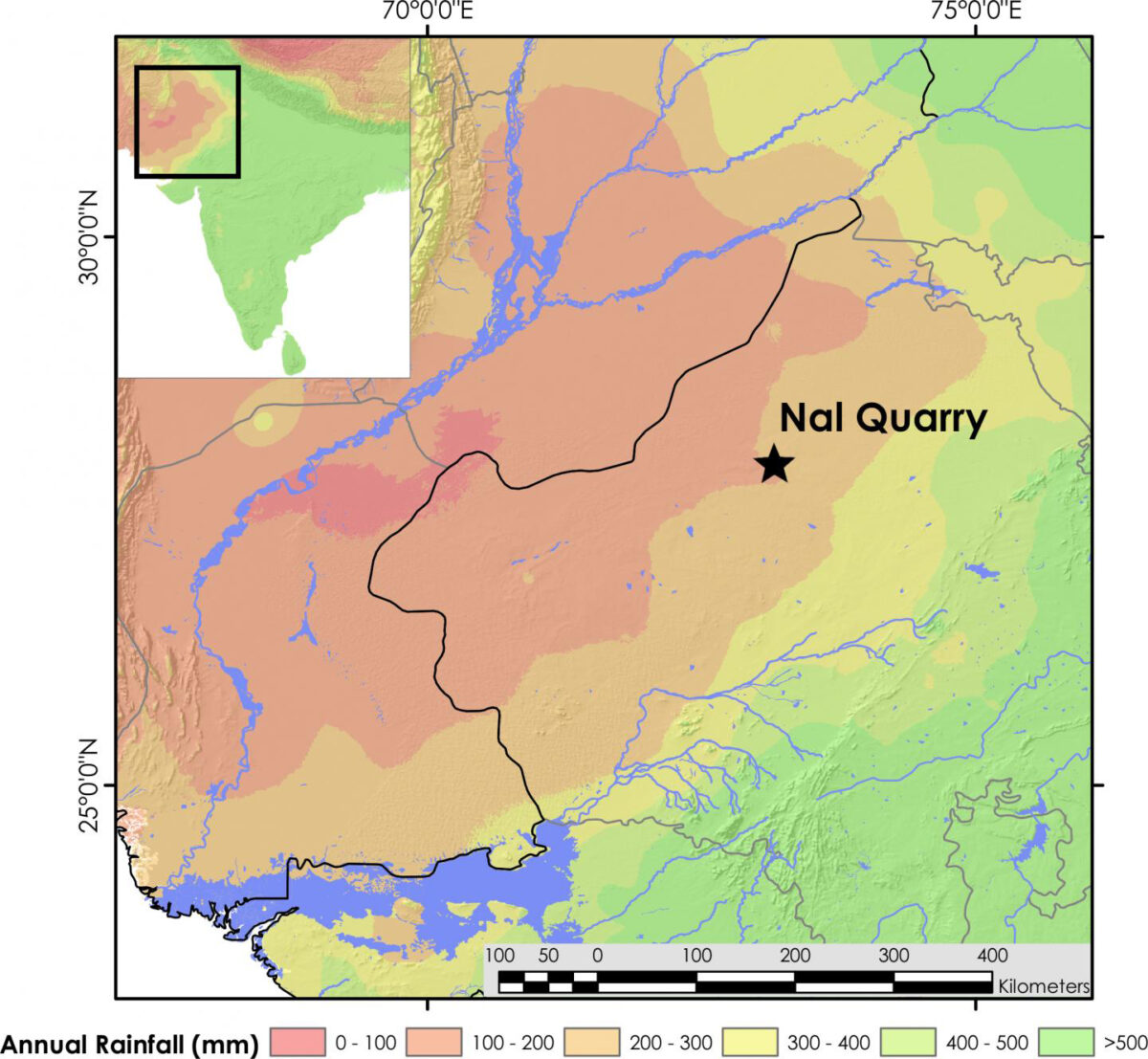 Situated at the threshold of the South Asian monsoon, the Thar Desert is an important region for understanding how past environmental change impacted patterns of human migration and adaptation to new habitats. Recent research highlighting the role of the Thar Desert in human prehistory has indicated that humans spread eastwards into the region starting from 114 thousand years ago during a phase of enhanced monsoonal rainfall, when the desert was transformed into lush grasslands. However, more recent phases of sand dune activity have obscured these ancient landscapes inhabited by earlier human populations.

In a new study published in Quaternary Science Reviews, researchers from The Max Planck Institute for the Science of Human History (MPI-SHH), Anna University, and the Indian Institute of Science, Education and Research (IISER) Kolkata document evidence for river activity in the central Thar Desert. This evidence indicates a river flowed with phases of activity dating to approx. 172, 140, 95 and 78 thousand years ago, nearby to Bikaner, which is over 200 km away from the nearest modern river. These findings predate evidence for activity in modern river courses across the Thar Desert as well as dried up course of the Ghaggar-Hakra River. The presence of a river running through the central Thar Desert would have offered a life-line to Palaeolithic populations, and potentially an important corridor for migrations.

Lost Rivers of the Thar Desert

Located at the threshold of monsoonal Asia, the Thar Desert marks the eastern extent of the desert belt that stretches westwards across Arabia and the Sahara. While this desert belt is typically thought of as inhospitable to early humans, it is becoming increasingly clear that during humid phases in the past human populations have prospered in these landscapes. This is perhaps best known in western South Asia from studying the Indus Civilisation (also known as the Harappan Civilisation) which flourished at the margins of the Thar Desert along the course of the now-seasonal Ghaggar-Hakra River between 3200-1500 BCE, and is thought to have inspired the mythological Saraswati River mentioned in the Rig Veda.

Yet the potential importance of ‘lost’ rivers for earlier inhabitants of the Thar Desert have been overlooked. “The Thar Desert has a rich prehistory, and we’ve been uncovering a wide range of evidence showing how Stone Age populations not only survived but thrived in these semi-arid landscapes,” says Jimbob Blinkhorn of MPISHH. “We know how important rivers can be to living in this region, but we have little detail on what river systems were like during key periods of prehistory”.

Studies of satellite imagery have shown a dense network of river channels crossing the Thar Desert. “These studies can indicate where rivers and streams have flown in the past, but they can’t tell us when” explains Prof Hema Achyuthan of Anna University, Chennai. “To demonstrate how old such channels are, we had to find evidence on the ground for river activity in the middle of the desert”.

A deep deposit of river sands and gravels was studied by the team, which had been exposed by quarrying activity near the village of Nal, just outside of Bikaner. By studying the different deposits, the researchers were able to document different phases of river activity. “We immediately saw evidence for a substantial and very active river system from the bottom of the fluvial deposits, which gradually decreased in power through time” explained Achyuthan. “Standing in the middle of the desert, the question we had to answer was ‘How old was this river?'”.

A life-line in the desert

The age of this river flowing in the middle of the desert is of particular interest. The river was flowing at its strongest during a phase of weak monsoonal activity in the region, and may have been a life-line to human populations enabling them to inhabit the Thar Desert. The timeframe over which this river was active also overlaps with significant changes in human behaviour in the region, which have been linked with the earliest expansions of Homo sapiens from Africa into India. “This river flowed at a critical timeframe for understanding human evolution in the Thar Desert, across South Asia and beyond” says Blinkhorn, adding “This suggests landscape in which the earliest members of our own species, Homo sapiens, first encountered the monsoons and crossed the Thar Desert may have been very different to the landscape we can see today”.

The next phase of research is to demonstrate where the river flowed from. Studies of satellite images have suggested a potential connection with a Himalayan source, such as the Sutlej. “We can’t demonstrate where the river flowed from at present” says Blinkhorn, adding “but the Indira Ghandi Canal, sourced from the Sutlej River, gives us some insight into what happens when a river flows through the centre of the Thar Desert – plants and wildlife flourish, providing ideal conditions for early human populations.”