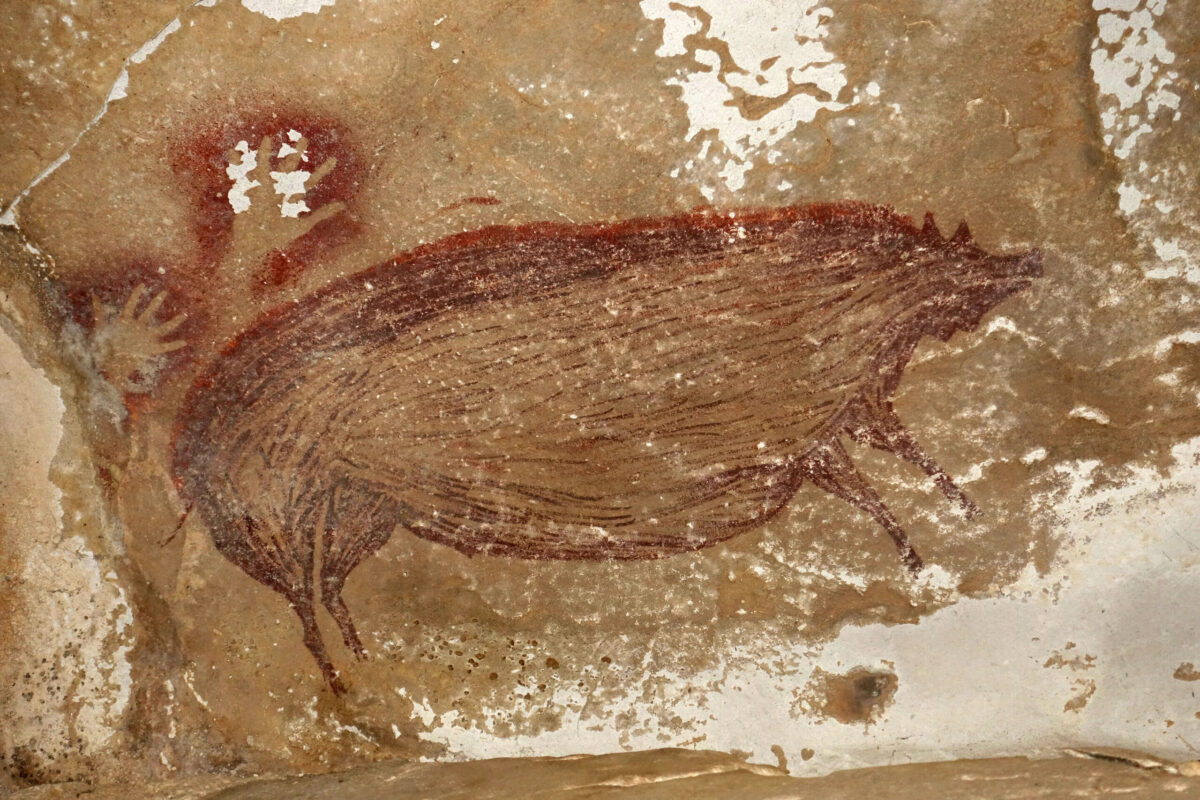 The most ancient cave painting of an animal found in Indonesia

It depicts a warty pig

The most ancient animal cave painting in the world to date has been found. The image of a warty pig was discovered on the wall of a cave difficult to access on the Indonesian island of Sulawesi and is believed to date back at least 45,500 years.

In 2019, at another site of that island the same scientific team had found the oldest cave painting up to that time, at least 43,900 years old. In future, researchers hope to locate even more ancient cave art in Sulawesi.

Painted in dark red ochre, the life-size painting in the Leang Tedongnge Cave in a remote valley of the island and an hour’s walk from the nearest road, seems to be part of the narrative of a larger composition that includes two other pigs, only partly.preserved. These short-legged wild pigs, which still survive as a species, have been a predominant target for hunters on the island of Indonesia for thousands of years.

Members of the local isolated Bugis community say this is the first time that Western eyes have seen the animal images in the cave. But the locals had also not learned about the existence of the cave until it was discovered in 2017.

The researchers, led by Maxime Aubert of Griffith University in Australia, published their findings in the Science Advances journal, according to the BBC, Agence France-Presse and the New York Times.

The creators of the painted image are unknown. It is possible — but not certain — that the painting was made by Homo sapiens. As Aubert said, “ the people who painted it were completely modern, just like us, they had all the ability and the tools to paint whatever they liked ”.

The image of the male pig measures 136 x 54 cm, i.e. almost one and a half meters long, while near it are the colored stencils of two human hands, from which the scientists will try to extract samples of ancient DNA.

“The discovery strengthens the evidence that the first modern cave art by humans did not appear during the Ice Age in Europe, as has long been estimated, but much earlier,” said Griffith University archaeologist Adam Broome.

The painting is the most ancient globally that depicts an animal, but it is not the oldest made by man. The latter is a design found in South Africa that is about 73,000 years old.

It is unclear when the human ancestors arrived in Indonesia and the other islands of Southeast Asia. After the mass “exodus” from Africa, the migrants of the past are estimated to have crossed these islands in some way and to have arrived in Australia about 65,000 years ago.