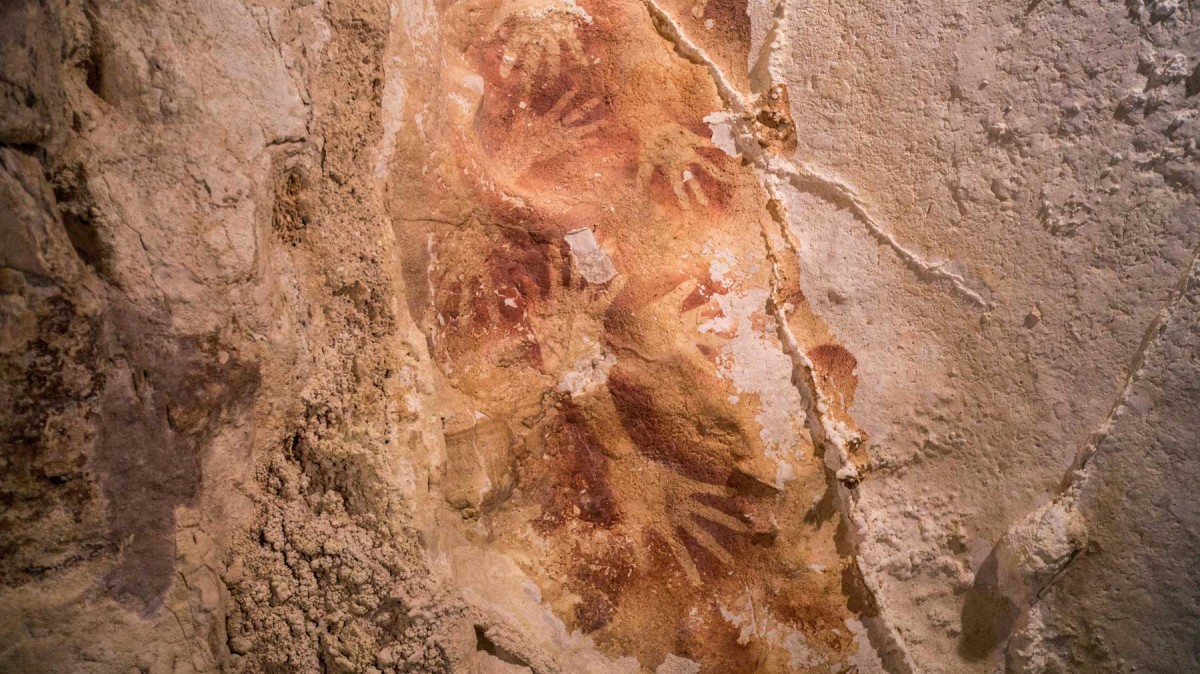 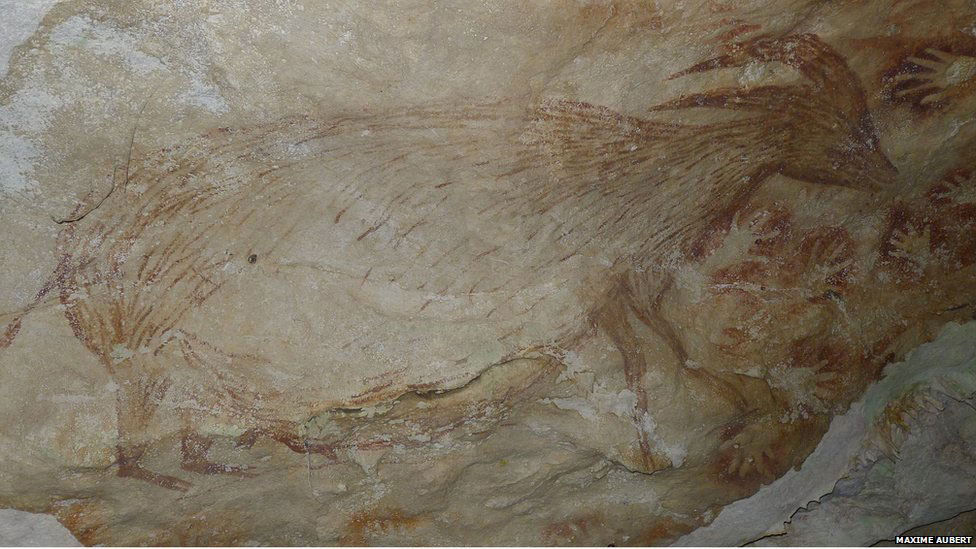 Cave paintings from the Indonesian island of Sulawesi

Cave paintings from the Indonesian island of Sulawesi are at least 40 thousand years old, according to a study published this week in the scientific journal Nature.

This is compatible in age with the oldest known rock art from Europe, long seen as the birthplace of ‘Ice Age’ cave painting and home to the most sophisticated artworks in early human cultural history.

These new findings challenge long-cherished views about the origins of cave art, one of the most fundamental developments in our evolutionary past, according to Maxime Aubert from Griffith University, the dating expert who co-led the study.

“It is often assumed that Europe was the centre of the earliest explosion in human creativity, especially cave art, about 40 thousand years ago’, said Aubert, ‘but our rock art dates from Sulawesi show that at around the same time on the other side of the world people were making pictures of animals as remarkable as those in the Ice Age caves of France and Spain.”

The prehistoric images are from limestone caves near Maros in southern Sulawesi, a large island east of Borneo. They consist of stencilled outlines of human hands – made by blowing or spraying paint around hands pressed against rock surfaces – and paintings of primitive fruit-eating pigs called babirusas (‘pig-deer’).

These ancient images were first reported more than half a century ago, but there had been no prior attempts to date them.

Scientists determined the age of the paintings by measuring the ratio of uranium and thorium isotopes in small stalactite-like growths, called ‘cave popcorn’, which had formed over the art.

Using this high-precision method, known as U-series dating, samples from 14 paintings at seven caves were shown to range in age from 39.9 to 17.4 thousand years ago. As the cave popcorn grew on top of the paintings the U-series dates only provide minimum ages for the art, which could be far older.

The most ancient Sulawesi motif dated by the team, a hand stencil made at least ~40 thousand years ago, is now the oldest evidence ever discovered of this widespread form of rock art. A large painting of a female babirusa also yielded a minimum age of 35.4 thousand years, making it one of the earliest known figurative depictions in the world, if not the earliest.

This suggests that the creative brilliance required to produce the beautiful and stunningly life-like portrayals of animals seen in Palaeolithic Europe, such as those from the famous sites of Chauvet and Lascaux, could have particularly deep roots within the human lineage.

“In fact, cave painting and related forms of artistic expression were most likely part of the cultural traditions of the first modern humans to spread out of Africa and into Asia and Australia, long before they reached Europe,’’ said co-author Adam Brumm, also of Griffith University.

There are more than 90 cave art sites in the Maros area, according to Muhammad Ramli and Budianto Hakim, Indonesian co-leaders of the study, and hundreds of individual paintings and stencils, many of which are likely to be tens of thousands of years old.

The local cultural heritage management authority is now implementing a new policy to protect these rock art localities, some of which are already inscribed on the tentative list of World Heritage sites.