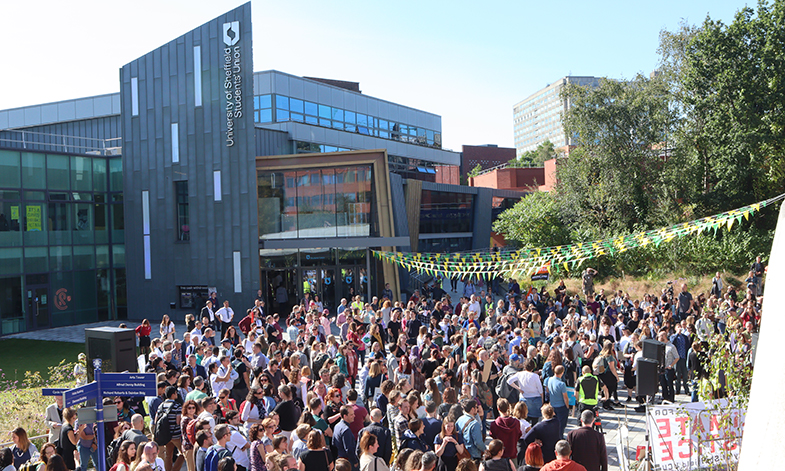 The University of Sheffield’s Department of Archaeology is Closing Down

Moving research subjec seen as “key areas of strength” in other departments.

The University of Sheffield’s Department of Archaeology is closing down, with the University moving research subjects seen as “key areas of strength” in other departments.

Back in the Spring 2021, the University Executive Board conducted a review regarding the future of the Department of Archaeology and addressing the University’s Council. The review included three potential options:  to support proposals for investment put forward by the department; to close the department; to retain key areas of strength in archaeological research and teaching by aligning them with other parts of the university.

On July 13, the University Council officially ratified the above recommendations, with the decision leading to the Departent seizing to exist as an independent entity. At the same time, the University’s Executive Board recommended that “key areas of strength” are aligned to other University departments. The decision was made despite the outcry by the international scientific community that also led to an online campaign for saving the Department, through a petition signed by more than 16,000 people.

The University’s official statement mentions that  the University Council had been “overwhelmingly supportive of the process and satisfied with the review conducted by the University Executive Board”.

At the same time, the Department, in a statement, expressed its; member’s disappointment, also questioning the mode in which the final decision process took place. According to the statement, “Colleagues in the department of archaeology at the University of Sheffield have today been informed that the University of Sheffield Council has decided to endorse the proposal of the University Executive Board to close our department. This means the unequivocal end of archaeology in the University of Sheffield. […. We received this information in a presentation which lasted 13 minutes. There was no ability to engage or respond as our microphones and cameras were kept off the entire time. We condemn in the strongest possible terms the decision taken by the university as well as the rudeness and lack of professionalism of the form of communication chosen. This is a decision that harms both the university and the city of Sheffield, within which our department is strongly embedded. Our campaign to oppose this calamitous decision will continue.”.

The University’s Student Union has also issued a statement expressing their disappointment on the decision, raising concerns about the University of Sheffield’s consultation process which, in their view “lacked transparency and input from student representatives”.

The University of Sheffield’s Archaeology Department has been a pioneering hub of specializations such as experimental archaeology, landscape archaeology, paleoanthropology-paleozoology, geoarchaeology and bioarchaeology, while its contribution to Aegean archaeology has been immense. Its name is linked to now-iconic academics/researchers: Keith Branigan and Susan Sherratt ar now Emeritus Professors at the Department after a long career. John Bennet, currently the Director of the British School at Athens and Stonehenge archaeologist Mike Parker-Pearson have also been lecturers there in the past.  Colin Renfrew taught at Sheffield from the mid ‘60s to early ‘70s, also running the archaeological project of Sitagroi in Northern Greece, and Yannis Hamilakis studied there for his Master’s. Currently Maria Relaki, also a Sheffield MA and Ph.D graduate, holds a position of a teaching associate in Archaeology. A year ago,  Sheffield Archaeology students had made headlines for running a successful Roman Bread experiment, holding up to the University’s long tradition in experimental archaeology, while the “Outstanding Contribution” Award from the University ‘s Wellbeing Awards Initiative was received by the Department’s Head Prof. Caroline Jackson.

Still, the Department’s long history and ongoing contribution to archaeology was not enough to save it from closure. The final decision has been explained as a result of ‘a crisis in student recruitment’, as a reality accepted by both the University’s management and academics. According to an extended statement by the University, “”The University’s Executive Board (UEB) made the recommendation in the face of challenging external pressures, not least a declining interest in studying archaeology by undergraduates, a trend which has been experienced by many leading universities over the past five years.

The “declining interest” is directly linked to the rise in tuition fees together with the emphasis on graduate employability. The reduction in government subsidies for arts subjects gave another blow to the ailing Department.

“The University of Sheffield should be proud of their diverse academic offering, and be able to show their staff and students that they value departments for more than their individual economic strength – but they have failed to do that today. We are concerned about what the University’s decision means for the future of our other valued departments in the face of an ongoing attack on the arts and humanities by this government”, the Union statement claims.

This year, only ten applicants hold offers to begin an undergraduate archaeology programme at Sheffield; after the closure decision, it is unclear whether the prospective students will be able to enrol or begin studying at the University.

The next day will see the Department merging with other departments at the University, with modules transferring to other programmes. The University statement mentions that “The discipline will continue to be taught and researched at Sheffield through being aligned with other departments instead of continuing as a separate department”, stressing a focus on postgraduate studies, and ensuring that archaeology research projects will continue to run. For the time being, an  Implementation Group is to consider the views of staff and students in order to develop detailed proposals on the areas of key teaching and research strength that will be retained, where they are best aligned, and the support and investment needed to ensure they thrive.