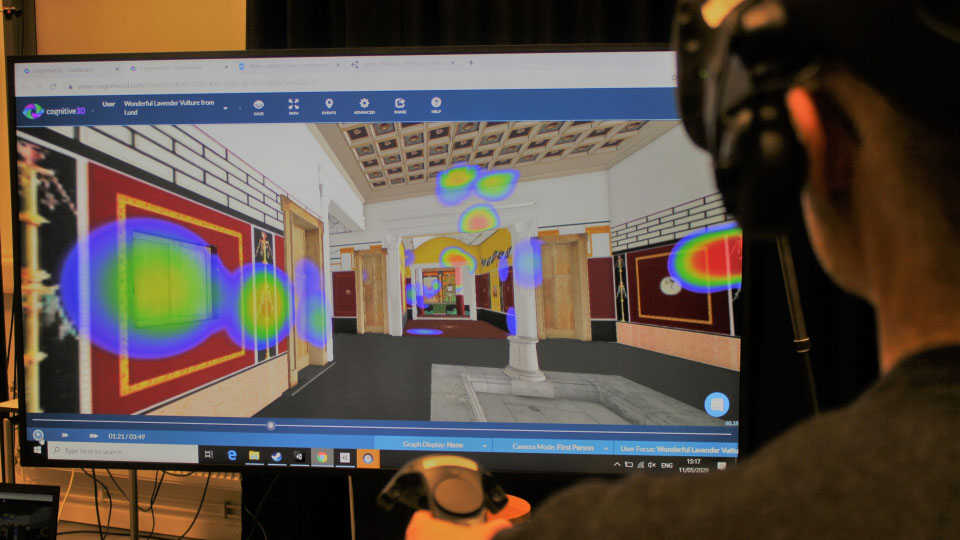 How did visitors experience the domestic space in Pompeii?

Researchers at Lund University in Sweden have used virtual reality and 3D eye-tracking technology to examine what drew the attention of the visitors when entering the stunning environment of an ancient Roman house. The team recreated the House of Greek Epigrams in 3D and tracked the gaze of study participants as they viewed the home.

Unlike today, Roman houses were not a place of refuge from work. Work and daily activities were intermingled during the day. Houses were designed to communicate the personal power and status of the owner and his family. The visual impression was so important that architects moved architectural elements such as columns to frame views, added fountains as focal points, or simply decorated the space by imitating those elements when it was not possible to build them.

“By tracking how people view the house, we can get closer to unlock what was in the mind of those that designed it. What messages are being conveyed, even in the smallest detail? We found many ways in which the owner was conveying a sense of power and wealth to visitors”, says Giacomo Landeschi, researcher at the Department of Archaeology and Ancient History, Lund University.

The House of Greek Epigrams was destroyed in the eruption of Mount Vesuvius in AD 79. It had a room completely covered with wall paintings accompanied by Greek inscriptions that gave the house its name.

A follow-up study will analyse the results in more detail.

The researchers say that the unique nature of the research could be further enhanced by adding other sensory experiences, such as auditory involvement, in the future.

“This study shows that we can now not only recreate the physical space but also understand the actual experience of the people at the time. This is an entirely new field of research for archaeology, that opens up new possibilities,” concludes Danilo Marco Campanaro, PhD candidate at the Department of Archaeology and Ancient History, Lund University.