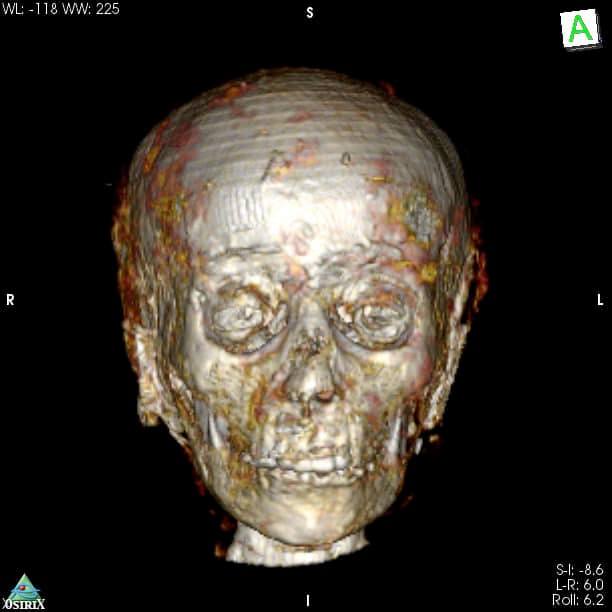 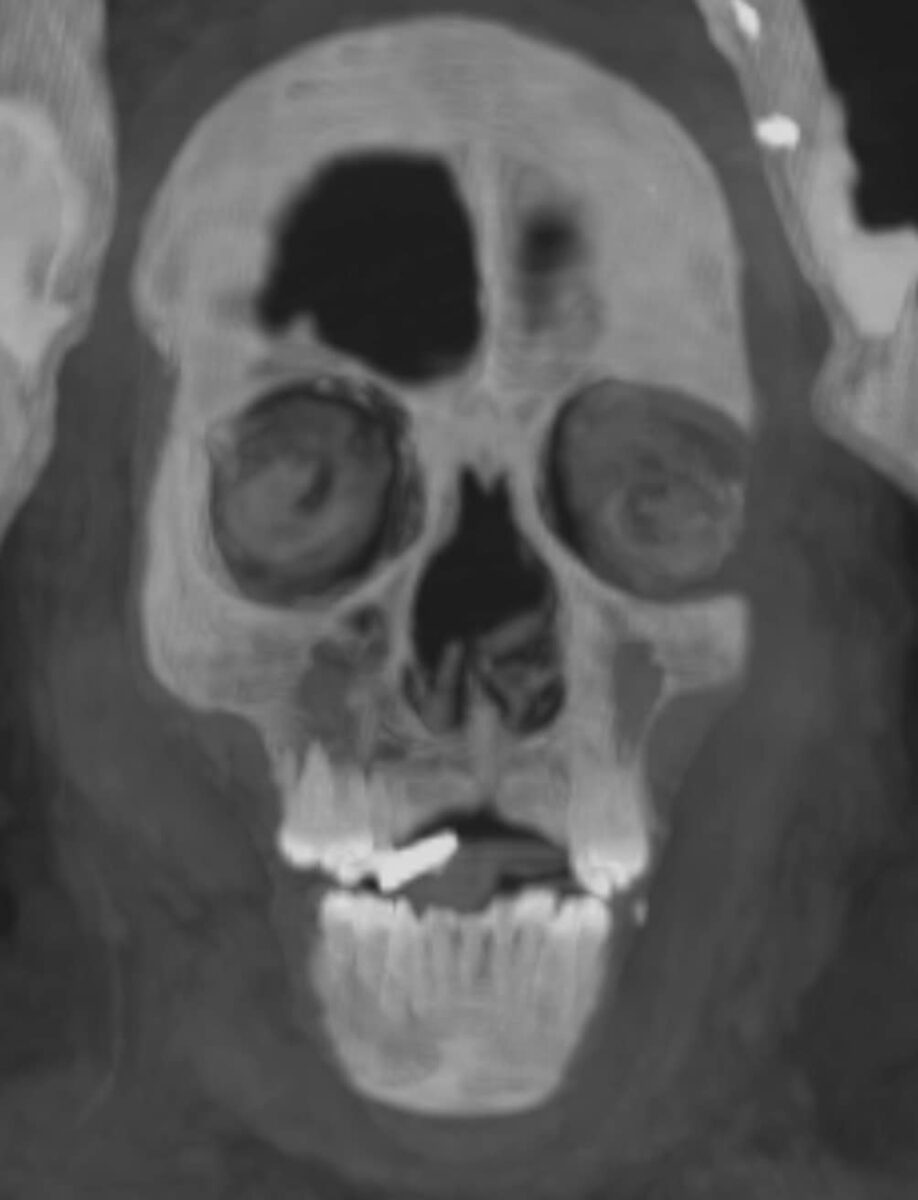 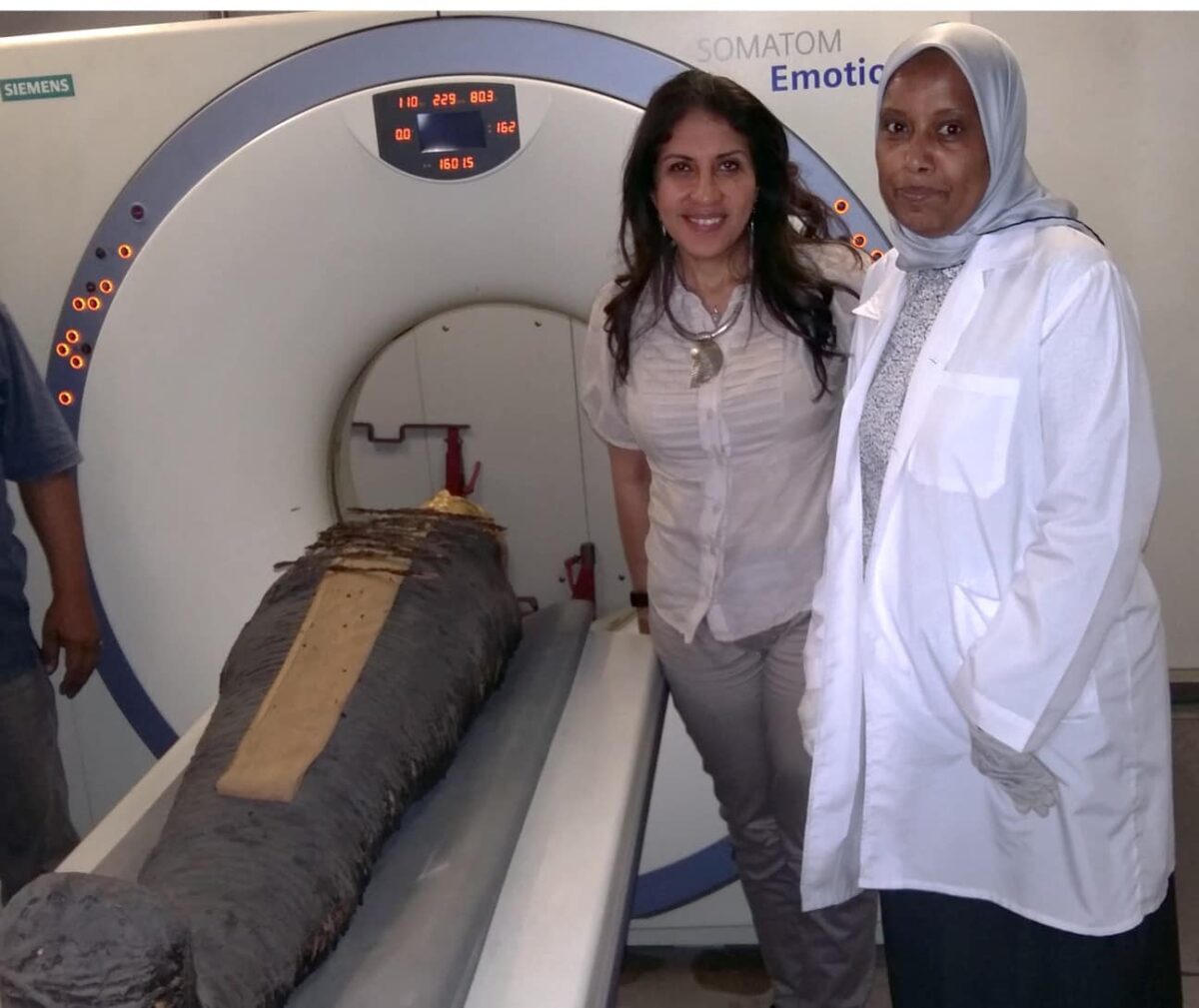 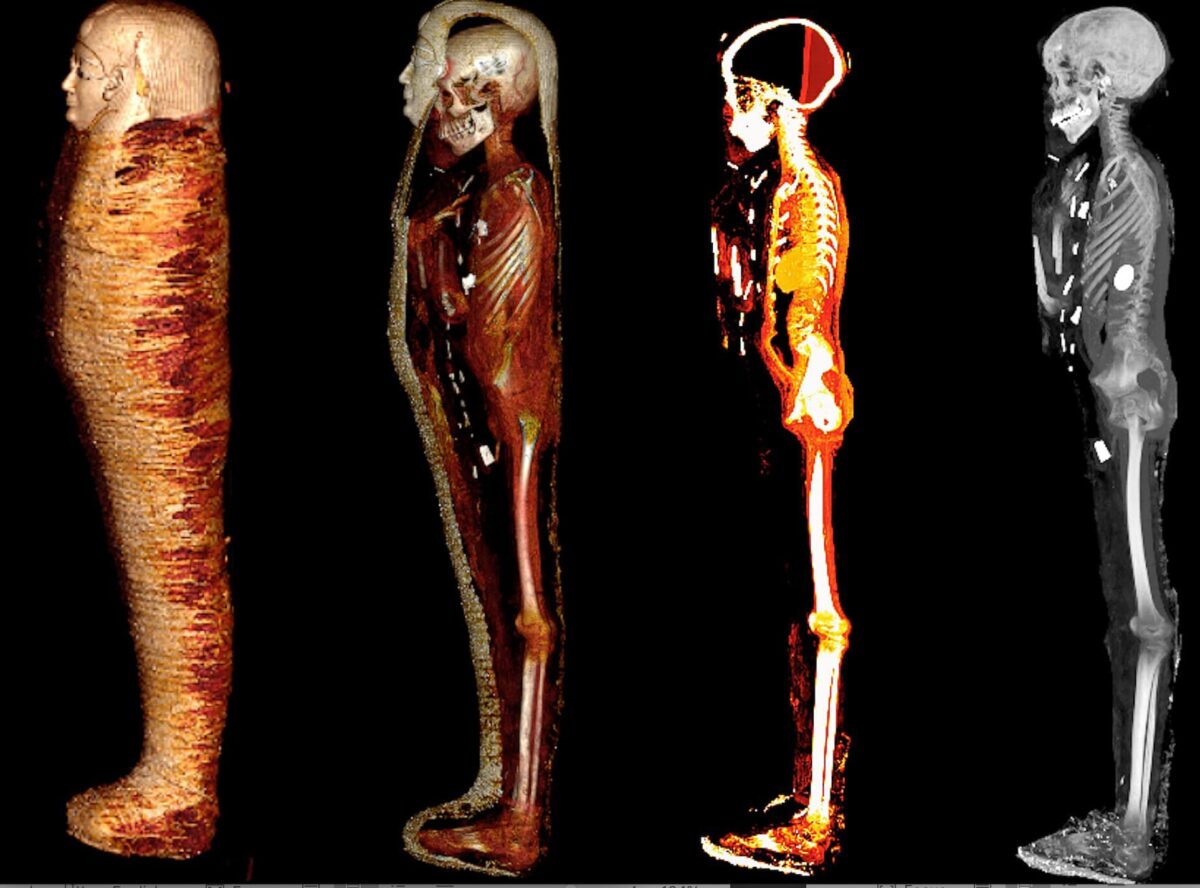 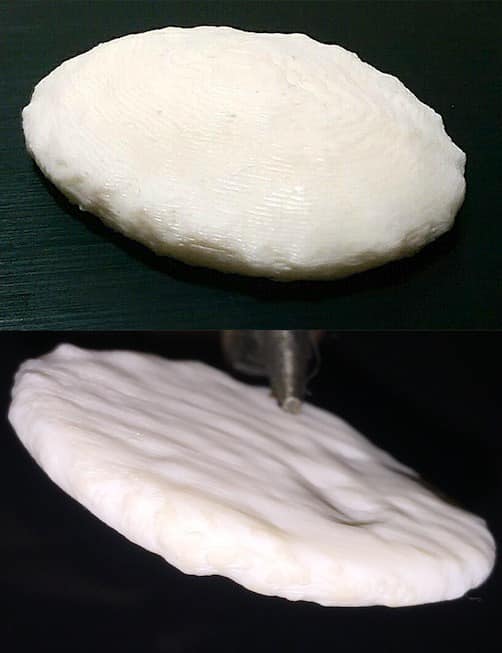 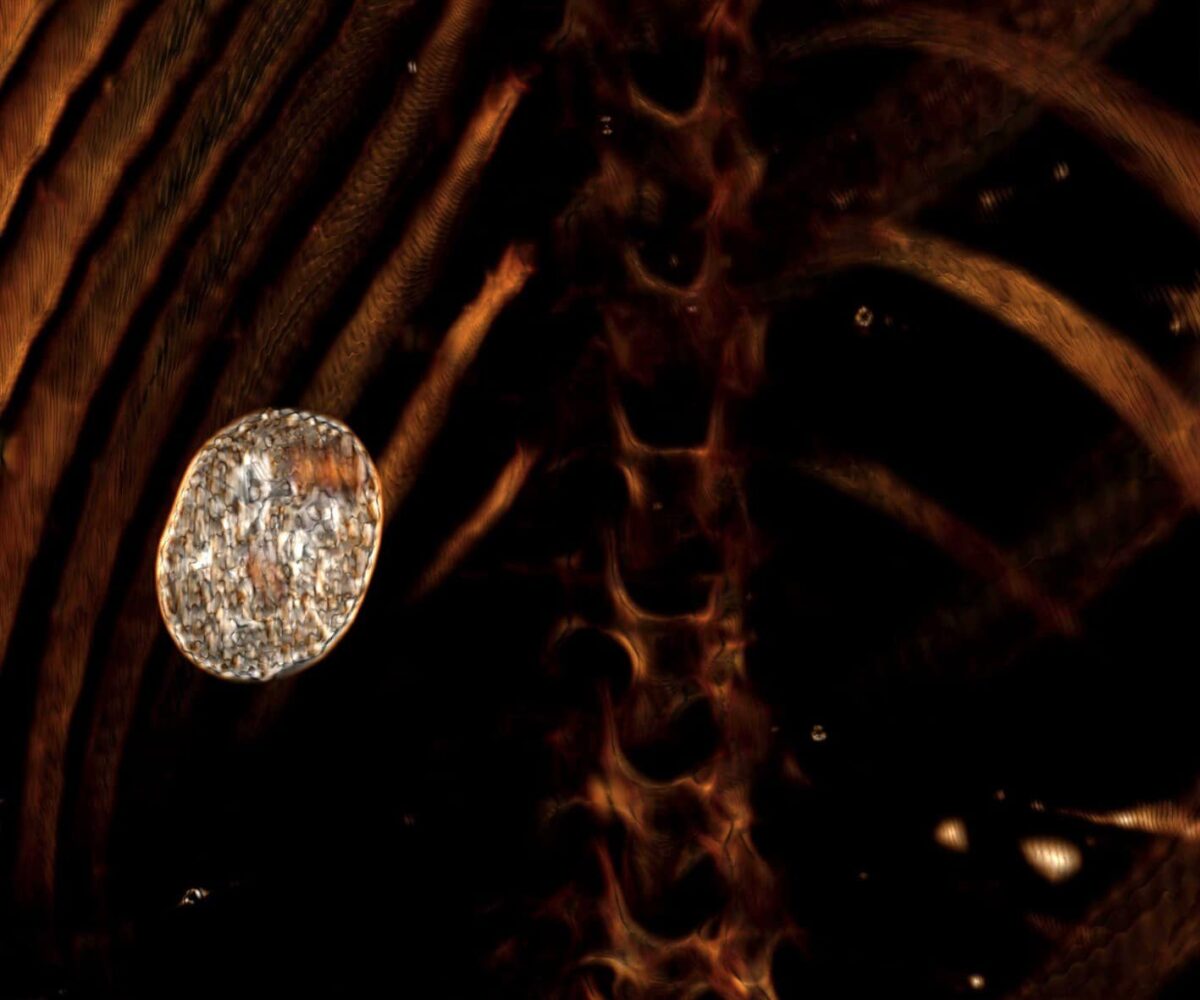 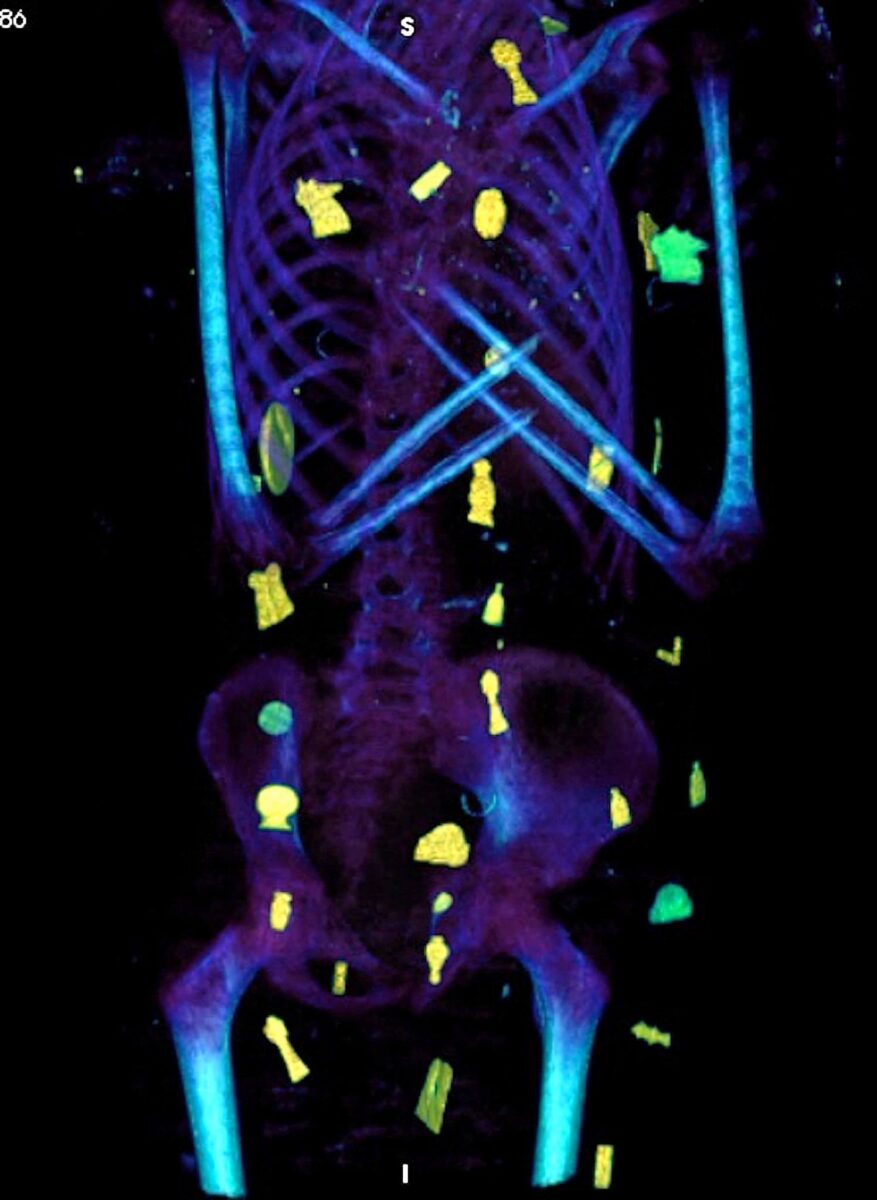 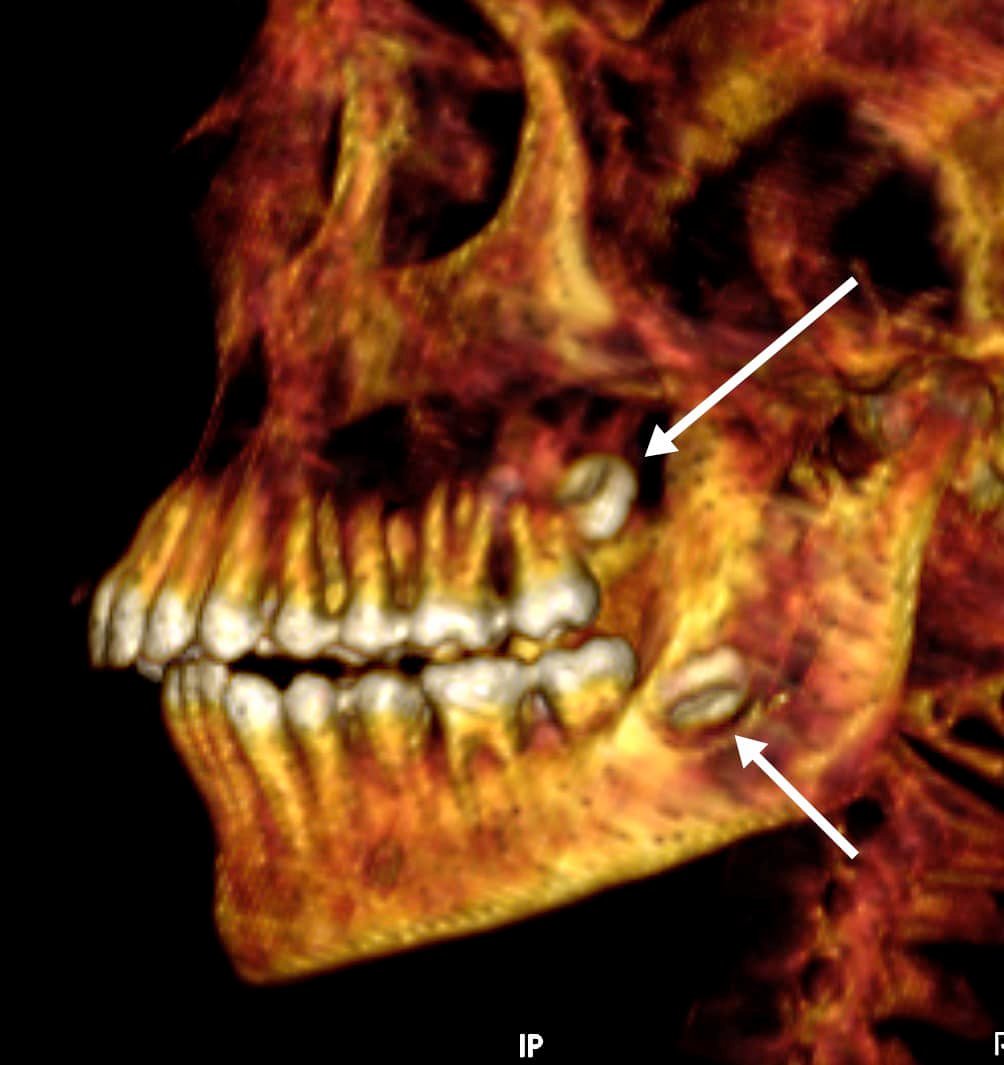 By using methods such as CT scanning and 3D printing

CT scans and 3D printing revealed new evidence on the “golden” mummy of a boy, which was
stored in the basement of the Egyptian Museum in Tahrir for more than a century. The results of
these studies were published in the journal Frontiers in Medicine, January 24, 2023, revealing
the mummy’s identity, state of preservation, and content.

The mummy had been entirely wrapped in linen in 1916, inside a cemetery from the Ptolemaic
era (about 300 BC) in the city of Edfu, Aswan Governorate, where it was moved and preserved,
at that time, in the basement of the Egyptian Museum in Tahrir. Only in 2015 Dr. Sahar Selim,
Professor of Radiology at the Faculty of Medicine, Cairo University, in cooperation with Ms.
Sabah Abdel Razek, Director General of the Egyptian Museum in Tahrir, and Mr. Mahmoud El-
Haloogy, former director of the museum, examined the mumy for the first time. The team used
non-invasive methods such as CT scanning (performed in the museum) and 3D printing.

Dr. Sahar Selim explained that the mummy belonged to a boy who died at the age of 15. It had
been embalmed with great perfection, the brain removed through the nostril and fillings and
resin were placed inside the cranial cavity. The entrails had also been removed through a small
incision in the lower abdomen, and fillings and resin were placed inside the body. The
embalmers were keen to keep the heart, which was seen in x-rays, inside the chest cavity.
X-rays also showed that the mummy was wearing a golden mask, a chest made of cartons, and
sandals made of fabric.

The two- and three-dimensional CT scans showed that there were about 49 amulets arranged in
an ornate arrangement in three columns between the folds of the linen rolls and inside the
mummy’s cavity. Experts were able to identify 21 different shapes of amulets, such as the Eye
of Horus, scarabs, the knot of Isis, and amulets in the shape of the horizon sign, the two
feathers’ sign, and others.

Radiology resultus showed that 30 of the amulets discovered inside the mummy were made of
gold, while the rest were made of stones or faience. There were also special amulets: one in the
form of a “tongue of gold”, hadd been placed inside the mouth of the deceased so that he could
“speak” in the other world, another in the form of “two fingers” was found below the torso, to
protect the mummification opening, and a third, a large gold scarab amulet, was placed inside
the mummy’s chest cavity and has been reproduced by 3D printing.

The study also indicated the appreciation of the ancient Egyptians for children, as this mummy
enjoyed distinguished funerary rituals that enabled it to resurrect and the other life according to
the beliefs of the ancient Egyptians, in addition to showing the high social status of the owner of
the mummy, as he is a boy who enjoyed funeral rituals of high status, in addition to his good
health condition as he was He has healthy teeth and bones, with no signs of disease or
symptoms of malnutrition.

Professor Sabah Abdel Razek explained that the study sheds more light on social life in ancient
Egypt. Indeed, it enhances our knowledge in Egyptian beliefs and funerary rituals of the
Grecoroman Era,while highlighting people’s technical prowess in mummification and
craftsmanship.

It is worth mentioning that the use of innovative technology and techniques supported the
decision of the Egyptian Museum in Cairo to move the mummy from its basement to its
exhibition halls, and put in on display. Dubbed &quot;The Mummy of the Golden Boy&quot;, the display
features CT scans next to the mummy and gives museum visitors a unique experience that
supports their communication with the ancient Egyptian civilization.