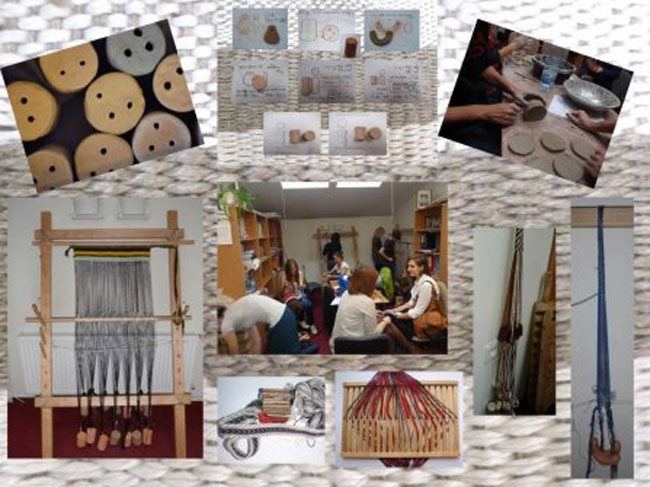 “Aegean Bronze Age Textile Production Techniques – Spinning and Weaving.” This experimental Archaeology workshop, organized by the Department of Aegean Archaeology, Institute of Archaeology, University of Warsaw and the Biskupin Archaeological Museum, will take place in Warsaw.

The workshop will be organized and conducted by experienced archaeologists and researchers:

-Agata Ulanowska, PhD – a senior lecturer at the Institute of Archaeology, University of Warsaw, archaeologist of the Aegean Bonze Age and experienced teacher in weaving techniques [http://www.archeo.uw.edu.pl/szablon.php?id=1207]

The workshop “AEGEAN BRONZE AGE TEXTILE PRODUCTION TECHNIQUES – SPINNING AND WEAVING” will be conducted in the Institute of Archaeology, University of Warsaw. A small textile workshop was set up in the Department of Aegean Archaeology in order to undertake experimental archaeology tests in weaving

In the tests conducted since 2011, mostly of exploratory character, experimental archaeology is applied as a teaching tool.

For the use of participants there are several spindles with spindle whorls (copies of the BA Aegean artifacts), several band looms, two warp-weighted looms of Scandinavian type, as well as several sets of loom weights, which are the copies of Aegean Bronze Age artifacts reconstructed by students.

Aim of the workshop

The main aim of the workshop “AEGEAN BRONZE AGE TEXTILE PRODUCTION TECHNIQUES – SPINNING AND WEAVING” is to teach and practice the basic “body knowledge” of spinning and weaving. During 3 days the participants will be practically introduced into spinning and weaving techniques. The last, 4th day is devoted to visit a unique Centralne Muzeum Włókiennictwa (the Central Museum of Textile Production) in Łódź [http://www.muzeumwlokiennictwa.pl/].

Introduction: Mechanics of weaving. Band looms and starting borders. The possible knowledge of the loom with a rigid heddle in the Aegean BA. Documentation of band weaving process.

Activities: Setting up and weaving bands and starting borders on a loom with a rigid heddle. Finishing.

Introduction: Setting up the warp-weighted loom. Parameters and functionality of loom weights.

Activities: Setting up the loom and weaving on the warp-weighted loom. Finishing

Day 4, June 26th 2014 – Excursion (by train) to the Centralne Muzeum Włókiennictwa (the Central Museum of  Textile Production) in Łódź