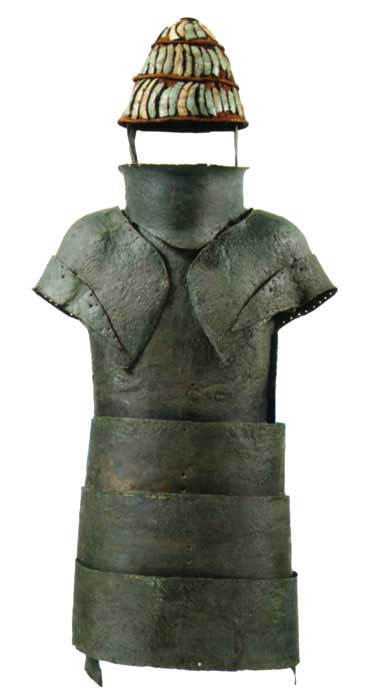 Philippos Koutsaftis’ archaeological film TO.RA.KE. (the word for thorax in Linear B) tells the story of the discovery of the famous Dendra cuirass and its diachronic impact on the local community. The Mycenaean bronze cuirass was discovered in May 1960 in a chamber tomb at the cemetery of Dendra by Greek archaeologist Nicholas Verdelis and his Swedish colleague Paul Åström. Today, the cuirass is exhibited at the Archaeological Museum of Nafplion.

So far, this armour is the only known intact example from the Aegean area before the Geometric period. It consists of two large plates which protect the chest and the back. The upper part of these plates is furnished with two curved shoulder-guards, the epomia. At the bottom of the epomia were two curved armbands. Between the epomia was a neck- guard. At the bottom of the two large plates hung six smaller bronze plates; three at the front and three at the back. The warrior’s equipment probably also included a boars’ tusk helmet as boar tasks and two bronze cheek-pieces were found inside a bronze cauldron near the cuirass.

The film will be introduced by the director Philippos Koutsaftis, while Dr. Monica Nilsson (Swedish Institute at Athens) will talk about the excavations at Dendra and the discovery of the famous cuirass.